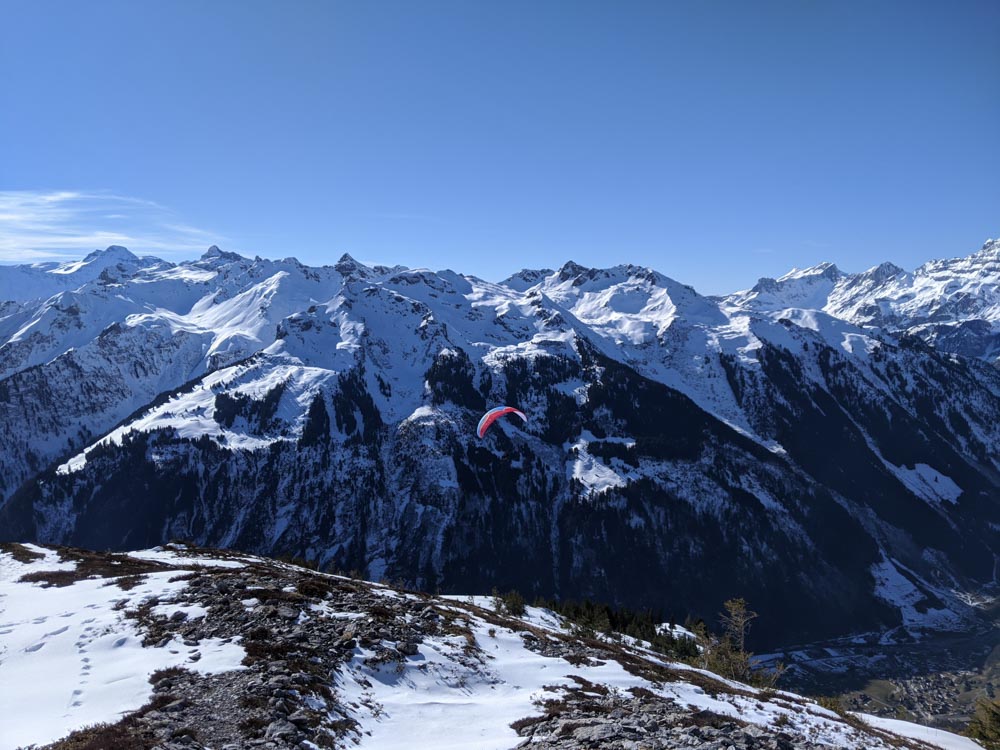 Who said adults can’t have fun in the snow?

This snowshoe hike is officially called Stäfeli Trail Route 991. We did it in late February when it’s normally freezing and snow is abundant. This year however it was warm and although there was some snow it wasn’t as deep as what we’re used to. Despite this it was a very fun hike with plenty of snow at the top to roll around in, gorgeous views, and as it turns out this was our last proper hike before the 2020 coronavirus pandemic kicked off in Switzerland and we were forced to stay home and wait it out – no more mountains for the time being!

Our hike took us to canton Glarus, one of the more underrated parts of the Swiss Alps where we’ve found the views to be just as jaw-droppingly gorgeous as those around Bern, Thun and Interlaken but devoid of all the tourists – except us of course. It’s a bit more clunky to get into by public transport so if you have a car we’d recommend that as the fastest way to get to the start of this winter hike. But fear not, we did it by public transport using 2 trains, a bus and a cable car and didn’t miss a single connection (thanks SBB!).

Once we got off at the bus stop ‘Matt Dorf’ we were still 400 vertical meters away from the start point of our hike. Fortunately, we didn’t have to hike these 400 meters up and took a cable car or ‘Luftseilbahn’ to the top. The ride up offered us increasingly pretty views of the Sernftal or ‘Sernf Valley’ below where the bus had dropped us off. In a few minutes we were at Weissenberge which was the start point of the Stäfeli Trail Snowshoe loop. From here, the trail was excellently signposted with purple and red arrows pointing you in the direction of Stäfeli hut. For added safety we used the Switzerland Mobility map and GPS to make sure that the signs we were following didn’t take us too far off the path.

It is worth mentioning now that already at this height (±1250 meters) the view of the mountains on the opposite side of the valley was stunning. Snow-capped and imposing, it was hard to decide what to take pictures of and at some point, I had to remind myself to stop with the pictures and just enjoy the view!

Back to the start of our hike. Normally at the bottom of any snowshoe trail, we’d gear up by putting on gaiters if we weren’t wearing waterproof trousers and by strapping ourselves onto our snowshoes. This time because of the snow conditions, or rather lack thereof, we decided to hike up the first bit of the path in our hiking boots alone. The path gently but continuously wound its way up small hills and paths and the higher we got the better the view got. Walking up on a path that was half snow / half exposed but frozen ground was tricky at times because the ground was very slippery and every few minutes we very nearly slipped in the mud. It wasn’t dangerous – we’d just get very muddy if we did.

So up we went following the well-marked signs and at times keeping an eye on the Swiss walking map and the GPS dot. In most cases the two of them agreed with each other but due to the snow conditions the local sign posts took us on a slightly different route. As Switzerland Mobility say on their site, follow the local signs!

Once there was enough snow on the ground that every step forward was sinking in we decided to put our snowshoes on. From the start point, it took us a good 1 – 1 ½ hours to get to the highest point of the trail, the Stäfeli ski hut. After we got there we found a couple of uncovered rocks in the sun to sit down and enjoy a well-deserved lunch. If you’ve done any hiking in the snow or with snowshoes you’ll know that it can be very heavy exercise. Nevertheless, this was a day where we had lots of energy and so after lunch we decided to continue further up for a little while. Note that Stäfeli Hut is the so-called midpoint of this winter hiking loop and the next bit of our hike isn’t part of the official trail. The loop hike on its own requires a fair amount of aerobic activity so just doing the loop could be an intense hike if this is your first time on snowshoes!

Our little detour had us following signs to ‘Sunnenhöreli’. The path is marked as a ‘white blue white’ path which means that it’s an alpine path and more difficult than the normal ‘white red white’ paths. However, the bit that we did was still of normal difficulty and we decided to turn around at the point the path started to get too steep and more like the alpine paths. The hardest bit of our detour was not the path itself but the last 100 meters up which was a near constant upwards slog! It was a proper leg burner and to get me through it I pulled out my earphones, turned up some music and went for it. Although my legs felt a bit like jelly when I got there, at 2000 meters the view from the top was magnificent! And when we stopped talking to each other it was utter silence. We heard nothing, no-one and not even the wind.

By this point, we’d had enough of leg burn to keep us satisfied and the path ahead looked pretty intimidating so we decided to head back. On the way down, we noticed that the snow-covered slopes were gentle enough to kind of well just sit and slide. So that’s what we did or at least mostly. We sat down, pushed and gently slid down the hill in some places and in other places simply ran down with our snowshoes on and ended up in a heaping pile of snow at the bottom! When we looked back we’d certainly done a good job of tossing up all the snow on a once perfectly flat snowy hillside. Ooops. Whoever said adults can’t have fun in the snow?

As we continued down, we noticed others had done the same and followed their tracks on down through the forest by sitting, rolling and well just sliding down! It was loads of fun and we were happy to have worn (mostly) waterproof clothing! With some luck and a bit of map reading we ended up right back to our lunch spot at the Stäfeli Hut where we originally started our detour.

From here on we were back on track and continued along the second half of the loop back towards the cable car station. The snow was deeper here and a small stream of water had carved some impressive dents in the snow as it meandered its way down the hill. By this point, we were a bit hooked on to the idea of rolling and sliding about in the snow so we took every chance we could get to do so. Once we hit the end of the snow line, though, the fun was up. We took off our snowshoes and continued wandering down.

At this point, we realised that we’d either have to run to catch the cable car that lines up with the bus once an hour or take it easy and grab a coffee at the restaurant that was about 10 minutes away from the cable car. We chose the latter. Coffee turned into ice cream and we enjoyed basking in the remaining sun and taking in the 360-degree view of the mountains around us. An hour later we piled into the little cable car for a pleasantly uneventful journey back home.

If snowshoes aren’t for you, there’s an easy winter walking path as well – more details here. It looks like the same short winter loop is also signposted for summer hikers, see here, and there are plenty of opportunities for larger summer hikes from Weissenberge too!

By Public Transport: Use the SBB railway app to plan your journey from home to ‘Weissenberge’. In short, from Zurich or Chur take the train to Ziegelbrücke station where you can change to a local train to Schwanden. At Schwanden get on the bus to Matt Dorf from where you can get the cable car up.

The Cable Car: The cable car station is called ‘Luftseilbahn Matt’. It is just a two-minute walk from the Matt Dorf Bus Stop or parking lot. Note that this cable car is not continuous and runs about once or twice an hour depending on the time of day and season. It mostly lines up with the bus but if you’re coming by car have a look at the Weissenberg website so that you can plan your arrival with just enough time to park and buy your cable car ticket (16 CHF return in 2020) before it departs.

Snowshoes: You can also rent snowshoes for 14 CHF (in 2020) from the cable car ticket counter.

Winter in Braunwald – Hiking Up and Sledging Down