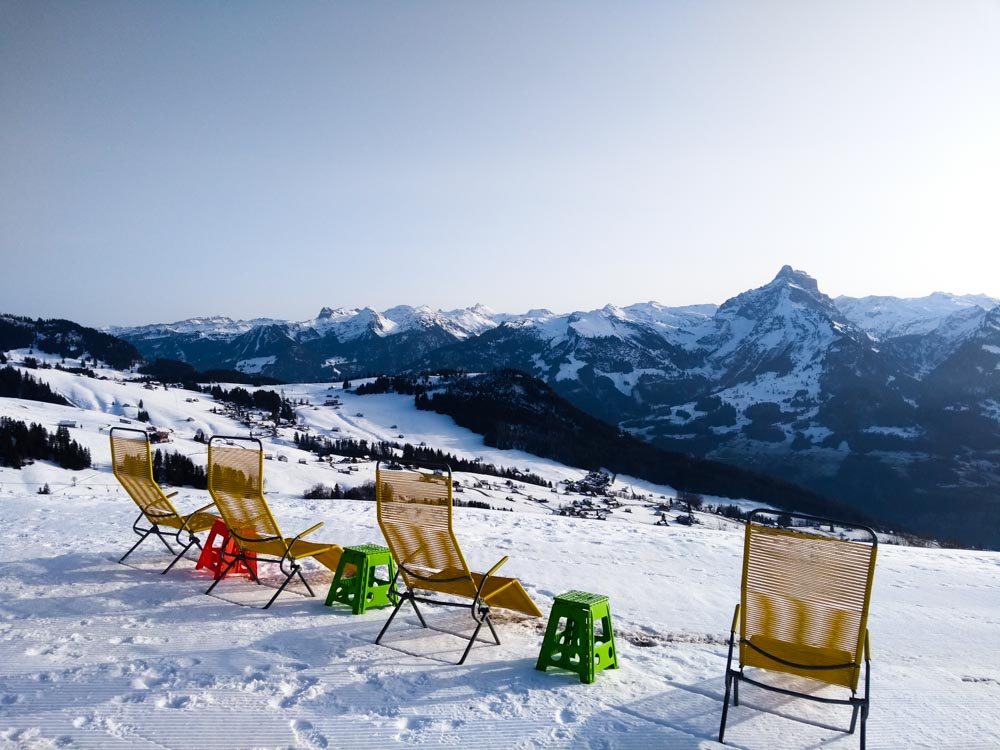 This was a hike or maybe more of a walk with some steep bits that I did on a winter weekday when I was in between jobs. My goal for the day was to get some exercise in the sun. I wanted a hike close to Zurich, with good views and a coffee at the top. So after consulting the weather app and looking at my hiking trail map I decided to head to Amden Dorf, a short 70 minutes away from Zurich.

It was an easy two part journey. SBB, the Swiss train company, first brought me on one of its brand-new S-bahn trains to Ziegelbrücke Station. From there I took one of the yellow Post buses, B650, up to Amden Dorf. As I got on the bus I laughed – I realised that I was an outlier. The age group on the bus was either below 15 or above 45. Everyone in between was probably typing away in some office somewhere in the city. As the bus wound up the mountain side it stopped midway to pick up a mum and her two children. They got on with full ski gear ready for an afternoon ski session somewhere further up from Amden in Arvenbuël. Convenient living that close to the slopes!

The bus ride was about 15 minutes in total and once I got to the top I realised what a warm winter it had been. There wasn’t much snow around even though normally at about 900 meters in Amden you’d expect near constant snow in the winter months (or at least that’s what my fellow laidbackhiker told me…). From Amden Dorf I had the option of taking the cable car at Amden Talstation 300 meters up to Niederschlag chairlift station from where there’s a sign posted winter walking trail called ‘Hinter-Höhi-Weg’. Since I had extra energy I decided to walk up the 300 meters to the top of the cable car myself.

Side Note: Amden Dorf is also the starting point for larger summer hikes to Mattstogg, Speer or Leistchamm, all of which we’ve done and will post about as we get this blog going. 🙂

On the hiking map on wanderland.ch there are two ‘green’ (summer) trails that take you up from Amden Dorf to the top of the cable car. With my, ahem, not so great map reading skills I mostly ended up somewhere in between those trails. That wasn’t a problem though, as the road which wound up the hill was a good marker to keep me from getting lost. Also, unlike on other hikes this was a wide gentle hill that I could mostly just meander up and didn’t have to strictly stick to the path. Using my GPS dot and the view of the road, I made sure I didn’t stray too far away and realigned myself with the path occasionally.

Despite the warmth it was still winter which meant that the fields were very damp from melted snow and deceptively slippery. At some point I was certain that I’d slip and get very muddy! Although I avoided a full face-plant in the mud, my trousers got muddier as the walk progressed.  I was glad that despite being a bit too warm in them they were at least water and mud proof.

At some point on my way up a fellow hiker informed me that if I was heading up to the restaurant next to the cable car I might want to reconsider my plans as the restaurant was about to close. Whilst I hadn’t aimed for that place specifically, the thought of not getting my coffee was a bit disappointing. But I carried on nonetheless and an hour or so after starting up the hill I made it up to the top of the cable car and found the winter hiking path. From there on it was easy going as the winter path was nicely patted down to walk on.

As I walked along, my eye caught a wooden sign saying ‘schnee bar’ which in English means ‘snow bar’. That got me excited – I might get my coffee after all. With the promise of a coffee in sight, I followed the sign carefully and it took me up a detour from the winter walking path to a wooden pop-up snow bar where I was welcomed with brightly colored arm chairs pointed straight at the alps :D.

There was just one other couple as company. I couldn’t complain; it was nice and quiet. I then headed straight to the bar and instead of the coffee I desperately wanted earlier I grabbed myself a ‘hagenbutte’ tee – I think that’s rosehip tea – and found myself sitting down and enjoying the view.

Feeling like I needed to do something ‘useful’ on my free day I took out a book to read and at some point dozed off for a bit longer than I should have. As I woke up and looked at the time I noticed I was running late for the bus back down to Ziegelbrücke that I had in mind. So instead of gently winding my way down the hill I ended up dashing down it.

I had originally planned to get off the winter path and follow the road down so I could keep my hands warm in my pocket and not bother with the navigation. Since I was late I decided to make a beeline down the hillside. Most often this wouldn’t be possible or advisable and I’d just have to take my time and get the next bus. But since the slope wasn’t steep I decided to go for it. Two years ago when I was new to hiking I wouldn’t have been able to do that, so I think that for the average hiker running down the slope like I did wouldn’t be a challenge! Just watch out for the slippery bits. If you slip in a field in the winter you’ll get muddy – very muddy!

On my way down, I used Google Maps to make sure that I was heading straight towards Amden Dorf bus stop. Because Google followed the road and I went straight down the hill I was able to beat Google’s time estimate by 10 minutes! A feat that I hadn’t previously managed. As the bus headed back down towards Ziegelbrücke I noticed the same mum and two kids were on the bus again. They were done for the day and very conveniently got off the bus midway to go home! In contrast, I still had an hour to go so I looked out the window and continued to enjoy the view of the snow covered Alps across the valley. It had been a fun hike and I was happy to have found the schnee bar!

Start: Amden Dorf
End: Amden Dorf
Time: 2-3 hours
Canton: St. Gallen
Difficulty: T1 – easy if you stay on the path
Altitude:± 420m ↑ 420m ↓
Popularity: 3/5 – popular with locals but not tourists
Season: Winter (summer may be very warm and in autumn you may get above the cloud line but that’s not guaranteed).
Peak: No real peak. My highest was about 1410 m at the snow bar

As mentioned above, this is a hike that you could customise very easily because of the gently sloped nature of the hill side.

Car: If coming by car you can park in Amden Dorf.

‘Hinter Höhi Weg’ Winter Walk: See here for a description and map of the marked winter path that made up part of the walk described above: https://www.schweizmobil.ch/en/winter-hiking/paths/route-0190.html.

Cable Car: The cable car in Amden Dorf is called ‘Die Sesselbahn Mattstock’. It takes you 300 meters up from Amden Talstation to Niederschlag from where the ‘Hinter-Höhi-Weg’ winter walk is well signposted.