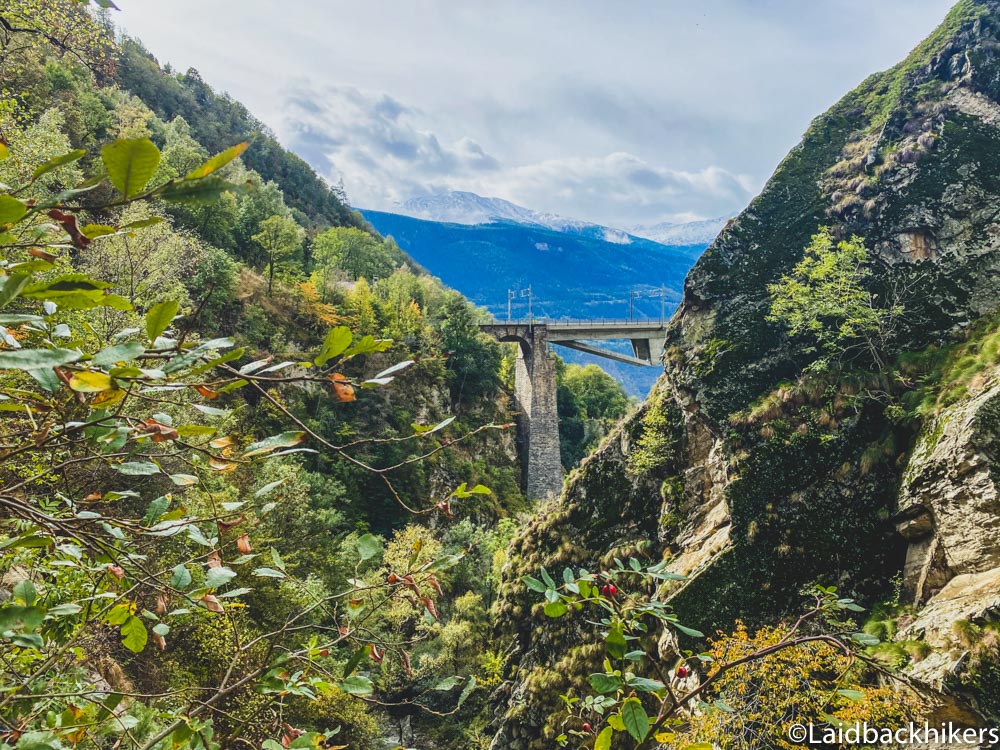 This one’s a very varied autumn hike, starting from Visp and heading up the Baltschiedertal to have a look at some of the bisses of Valais. For the couple of days beforehand, we’d been high in the Alps in Valais, with the ground covered in snow every morning and a wind chill that made you never want to leave the cottage. To get a bit of warmth, we decided we wanted to do something a bit warmer down in the valley 🙂

So at a balmy 12 degrees with sunny spells, we set off from Visp station towards the village of Eggerberg. The first bit was an easy walk past a school and along the straight channel taking the river Vispa from the Zermatt valley into the Rhone river (entertainingly named ‘Rotten’ in German!). We had to pay attention to the hiking signs – they were not the easiest to follow.

After crossing the Rhone we went past the bus stop of ‘Baltschieder, Kumme’ and immediately turned right following the signs to Eggerberg. At this point, the scenery suddenly switched back a couple of hundred years into the past, on a little path that winds 200 meters up through the picturesque village of Eggerberg, with old-fashioned brown cottages and lovely views looking down onto Visp and the other side of the valley.

The path up eventually meets with the signs for route 61 which we followed for the next flat section of our hike. Winding around the mountain, the path was an easy wide track giving us more fantastic views, including any trains chugging up and down an impressive piece of railway track that the Swiss have banged into the hillside – this is the line from Brig up to the Lötschberg tunnel.

This is where the path really started to get fun. As we continued, a large railway bridge came into view, followed by a little pedestrian bridge in the distance that we’d be crossing over. On either side of us were mountainsides that rose up steeply and below us were views down into an impressive gorge carved out by the Baltschiederbach stream. Now you’d think that crossing the bridge would be a good enough highlight, but there are actually tunnels at both ends of the bridge as well, along with another smaller bridge past a waterfall. It’s difficult to describe but the views in all directions kept us in awe of this path.

If you’re a trainspotter there are some great places to wait to grab an impressive shot of a train crossing the bridge and entering or exiting a railway tunnel next to the bridge. It does require some patience though, since the trains aren’t very frequent – perhaps a few per hour.

We continued up, now on the other side of the Baltschiedertal valley, meeting our first two fellow hikers for the day. Parts of this path also follow a bisse – a water channel – which at times can make for some intimidating paths, but this one was quite tame. At this point we also reached a decision point – head immediately to Aussenberg or hike further up into the valley. The beauty of the path had won and so we decided to make the walk a bit bigger and continue up the valley.

For the next hour we hiked our way up the valley towards Ze Steinu. With the river below, the impressive cliffs on the other side of the valley and the mini waterfalls in all directions – there was definitely a benefit to the rain and snow the day before! The path was mostly easy all the way with one or two choke points that required some sure-footedness to cross. We didn’t hike all the way to Ze Steinu and instead turned left about 10 minutes short of Ze Steinu, onto the path headings towards the ‘Stolleneingang Nord’ (in English: north tunnel entrance). As a side note, if you want to head up here make sure you’ve got a map downloaded or you have a paper map, as the data signal up this valley was weak.

As we went along, my hiking partner started to get enthusiastic about the way back – on the map, this involved either a very steep and narrow mountain path along a cliff, which was a no go for us, or a rather random 1.5 km dead straight pedestrian tunnel. I must admit, I wasn’t particularly thrilled at the idea of walking through an unlit tunnel for 20 minutes – then again how often do you get to hike through a tunnel?

But first – why the tunnel? Well, for that we need to go back to the water channels that we mentioned earlier. These are historic irrigation channels (‘bisse’ in French or ‘Suone’ in German) that bring water from mountain streams to the dry fields and vineyards of Valais. Often these channels hug the mountain sides – cliff or no cliff – and are accompanied by walking trails that can be banged into the cliff side with nothing but a board of wood to walk on and (sometimes) a chain for some notion of protection. The paths that hug the channels often make for some dizzying heights.

On this occasion it turns out that the historic trail, the outer Niwärch, is the cliff hugging path I mentioned above that we decided not to do. Locally it’s apparently known as one of the most dangerous bisse routes in Valais. And I guess that the tunnel helped circumvent the constant water supply interruptions brought about by rock falls and avalanches along that cliff side.

The entrance to the tunnel makes you feel like you’re about to enter one of those famous Swiss nuclear bunkers. It’s cold in there – maybe only 8 or 10°C – so if you’re coming in the summer make sure you have a jumper or better yet a rain jacket – the tunnel drips. It’s about a 20-minute walk through or a bit longer if you, like us millennials, whip out your smart phones to give night mode on our cameras a bit of run for its money. This is what we managed:

The tunnel was comfortably big enough to walk through, with the bisse on one side of the tunnel, flowing peacefully downhill, and the walking path right next to it. As we entered the tunnel it was pitch black in front of us, but the tunnel immediately kinks and at the very end you see a pinhole of light at the end of the tunnel. I was happy to see the light. The walk through was fun and we met two Swiss fellas coming in the opposite direction with a cart of some kind in one hand and a tree felling knife in the other. Looked like they were going to cut some wood.

Once we were out of the tunnel, the contrast to the other end was huge. When we headed into the tunnel, we were in a narrow and steep valley with snowy mountains towering above us. Coming out the other end of the tunnel,  it was sunny and we had wide views across the main valley again. The sky had also continued to clear up more while we were in the tunnel and we could see more snow covered mountains far in the distance, up towards Zermatt and Saas Fee. From here on it was a simple and easy hour’s journey, mostly continuing along the bisse to Ausserberg.

There are trains just once an hour from Ausserberg train station to Brig or Kandersteg or even more infrequent busses back down to Visp. Since we didn’t want to wait forever on the platform (although there was a nice looking restaurant next to the station), we paced our walk to meet the next suitable connection.

Overall this was one of the most varied walks I’ve ever done in Valais and walking up the  valley in particular was simply impressive! Also, did I say – we only met 6 people during the entire hike so if you’re after off-the-beaten-path trails this is certainly one of them.

This is a snapshot of the route we took.

There are many ways to get an essence of this hike without doing the full route and we’ve captured some of them below. If using public transport, we recommend that you check when the times line up in advance as busses & trains are infrequent. Here’s a few options (in order of longest to shortest).

11.5 km, 3.5 hr, ~ 530 m ↑ 430 m ↓
You can shorten the hike by starting directly in Eggerberg instead of Visp. There’s parking at Eggerberg or you can take a bus from Visp or the train from Brig to Eggerberg Station. Once in Eggerberg, find and follow the signs for route 61 and in about 500 meters you’ll be on the path we describe above.

Option 2: Visp to Ausserberg (no tunnel)

5 km, 1 hr 15 min, ~ 100 m ↑ 100 m ↓
Finally, for an easy alternative that involves the beauty of the bridges, waterfalls and caves but skips the tunnel, you can start at Eggerberg station and follow route 61 to and from that point.