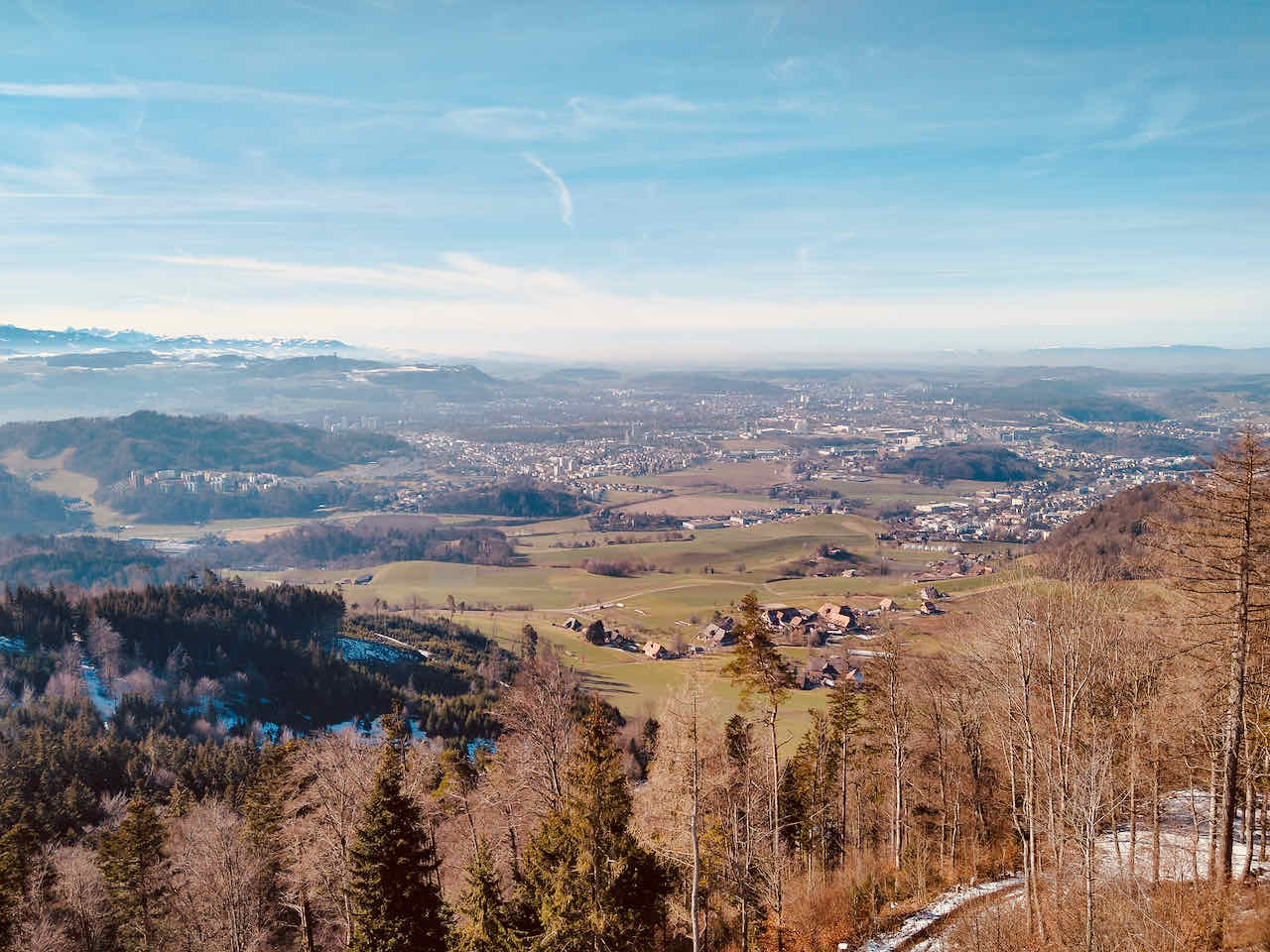 Another day, another of Switzerland’s smallest mountains! Bantiger is on the Swiss Plateau close to Bern – so close, actually, that we started this walk at Bern main station and headed down through the center of the old town of Bern, through the covered walkways and past the famous bear pit. From the bear pit, we skirted through the suburbs, briefly following part of long-distance route 4. By the way – long-distance route 4 is actually the Swiss part of the Camino de Santiago, or Way of St. James, which takes you all the way to Santiago de Compostela in northwestern Spain…

Santiago was a bit far away for us on this particular hike, so we headed left after about two kilometers on route 4 and skirted around Ostermundigeberg and down a long staircase into Deisswil.  If you’re just looking for a route straight up Bantiger, Deisswil is actually a logical starting point (that would be the second of the three maps below). From here, we headed up towards Ferenberg, and before long we were already seeing panoramic views of the Alps in the distance. Although it wasn’t a particularly difficult path up, everything was starting to melt after a cold couple of weeks and there were some really muddy bits in places. That slowed us down, since we’d seen someone fall in some of this semi-frozen mud recently – it’s not much fun! Oh, and this was in February, by the way – when the weather (and snow) cooperates, you can climb relatively small and gentle peaks like Bantiger at almost any time of year!

The mud was pretty much the only obstacle for us, plus a few patches of snow a bit further up. At the summit, we headed straight for the observation platform on the TV tower for a proper look at the promised views, including the Alps, the Jura and nearby Bern as well. The views were as good as advertised.

After a while on the peak, we headed north along a path that gradually threaded down through pine trees. The path eventually met the top of the cliffs that define the Lindetal valley, and we got to the trickiest part of the walk – a couple of awkward steeper sections that took us down to the valley floor. Halfway down this awkward bit was a highlight of the walk, the Fluehusli – a pair of houses that have been created by walling up the overhang under a cliff. There’s even a tiny private funicular linking the houses to the bottom of the valley! If you’re curious, we found a couple of pictures here of what they look like on the inside…

Anyway, that was pretty much it – from there, it’s two kilometers to a bus stop in Krauchthal to finish the walk. The rural countryside at the end was quite a contrast from where we started, walking through the middle of Bern!

The public transport doesn’t get you particularly close here, but there are a couple of car parks in Ferenberg just to the south of Burglen – from there, you have the loop option shown below.

Apparently you can park even further up at Cholgruebe (the 819m point at the easternmost point on the loop shown below), which would give you an even shorter and easier way up to the summit.

Starting just outside Bern in Deisswil, the path winds up through the fields to the summit. On the north side of the summit, a nice path gently drops down towards the Lindetal, finishing in rural Krauchthal.

This is the full walk that we described in the main text above. This is basically the same as the option just above, with the addition of the section from Bern to Deisswil at the beginning.

Stockhorn – A Knobbly Mountain and a Thunderstorm