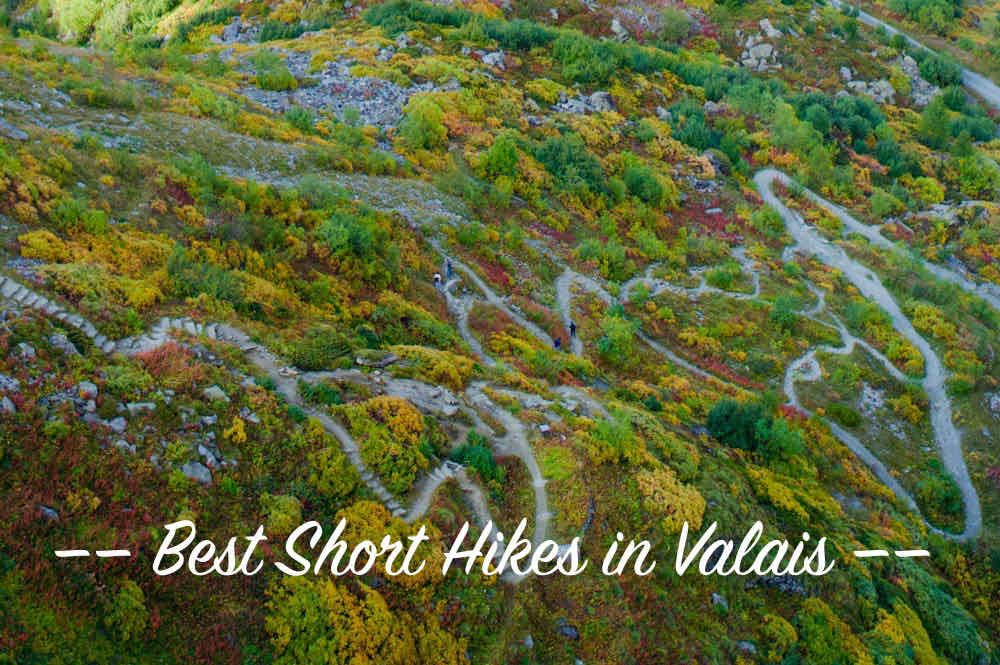 Valais is one of Switzerland’s most popular destinations, stretching from its vineyard-filled main valley all the way up to the 4000m+ mountains surrounding Zermatt and Saas Fee. There are so many large mountains, in fact, that the average altitude in Valais is over 2000m.

Conquering the highest peaks isn’t really our focus today though – instead we’re going to look at some of the best small hikes that Valais has to offer. The combination of varied terrain and good infrastructure in Valais means that there are plenty of options for small hikes, both in the valleys, where the summers are hot and sunny, and up in the mountains, where the ski infrastructure, particularly in places like Zermatt and Saas Fee, allows you to get right up alongside famous mountains like the Matterhorn and Monte Rosa with minimal effort.

So – here’s a list of our favorite small hikes in Valais!

Gornergrat is a ridge above the famous holiday town of Zermatt, and is popular for its spectacular mountain views. This ridge is at 3000m and surrounded by even higher mountains, offering magnificent views of many of the highest mountains in the Alps, including the Matterhorn and Monte Rosa.

A train heads up to Gornergrat from Zermatt, so there’s no need for any large hikes here. You can simply get off at the top station, Gornergrat, and walk up the peak of the same name, which gets you some great views but will only take you a few minutes. If you want a bit more exercise, though – and more views – you can get off in Rotenboden, a couple of hundred metres lower down, and walk up to Gornergrat from there.

If you’re not accustomed to walking at high altitude, you may find the walk more comfortable if done in reverse, starting at Gornergrat and walking down to Rotenboden.

The town of Sion is dominated by a pair of hills, Valère and Tourbillon, both of which are capped by large castles. If you start from the center of the modern town of Sion, you end up walking through the old town of Sion on the way up the first hill, Valère. This first castle (more of a chateau really) is in a relatively good state of repair and is actually a history museum.

The neighbouring second hill, Tourbillon, holds an older castle. You can walk into the outer grounds of the castle freely, but access to the inner part of the castle is restricted here as well. Even if you’re not interested in entering the two castles, the hills offer picturesque views and the walk up through the old town is also worth the effort.

Heading back into the high mountains, Klein Allalin is a peak that’s easily accessible in the winter from Felskinn, one of the cable car stations in Saas Fee. A winter walking path is normally maintained during the winter ski season – no snow shoes required here. The path stops just short of the summit at Britanniahütte, where you get huge views of the glacier-covered mountainsides and the frozen-over Stausee Mattmark below.

In theory this walk can also be done in the summer, but bear in mind that it’s actually harder in summer – it’s marked as an Alpine path and the first portion crosses a glacier. We tried once in the summer but couldn’t get off the glacier safely so had to turn back. Best to go in the winter when the ski resort maintains the path!

You can pack quite a lot of variety into a short walk if you try! This short stretch will give you views across the valley of Valais, several pedestrian tunnels and bridges, a close-up look at an impressive railway bridge over a gorge, and a look at one of the bisses (water channels) coming down from the mountain streams around Valais.

This was part of a larger hike we did – see our post here for more details.

Right at the eastern end of Valais, you’ll find the Grimselpass, Furkapass and Nufenenpass, three impressive passes taking you out of Valais. The Nufenenpass is perhaps less famous, but is the highest of the three, and is also one of the highest road passes in Switzerland.

At this kind of altitude, good views are pretty much guaranteed. For a small walk here, we recommend stopping at the bus stop ‘Griespass, Abzw.’ (there’s also a small car park here) just before the top of the Nufenenpass on the Valais side of the pass. From here you can walk up past a couple of huge wind turbines and a dam, Griessee, before reaching Griespass on the Italian border.  Despite the road relatively nearby and the wind turbines behind you, the stony landscape up here can feel pretty remote!

This is the largest walk on this list. Just the first half of the walk is already worthwhile though if you’re after something smaller – just go up the road and track to the wind turbines, where you can see down on Griessee and across to Griespass.

Finally, bear in mind that this is very much a summer-only walk as the road over the Nufenenpass is covered in deep snow for much of the year.

The Grand Dixence dam is an absolute monster – the tallest dam in Europe and one of the tallest in the world. It’s so large that there’s actually a cable car to take you from the bottom to the top, but we recommend walking up the path from the car park at the bottom to get the views on the way up as well and to get a real sense of the size of the dam.

At the top you can walk across the dam, and you can also walk a little way along the side of the lake if you want, along a track that winds in and out of some tunnels.

There are loads of good hiking options in Valais, and we might do another post sometime with some larger Valais hikes. For now, we’ll stick to the theme – here’s a couple of other good small hikes in Valais!