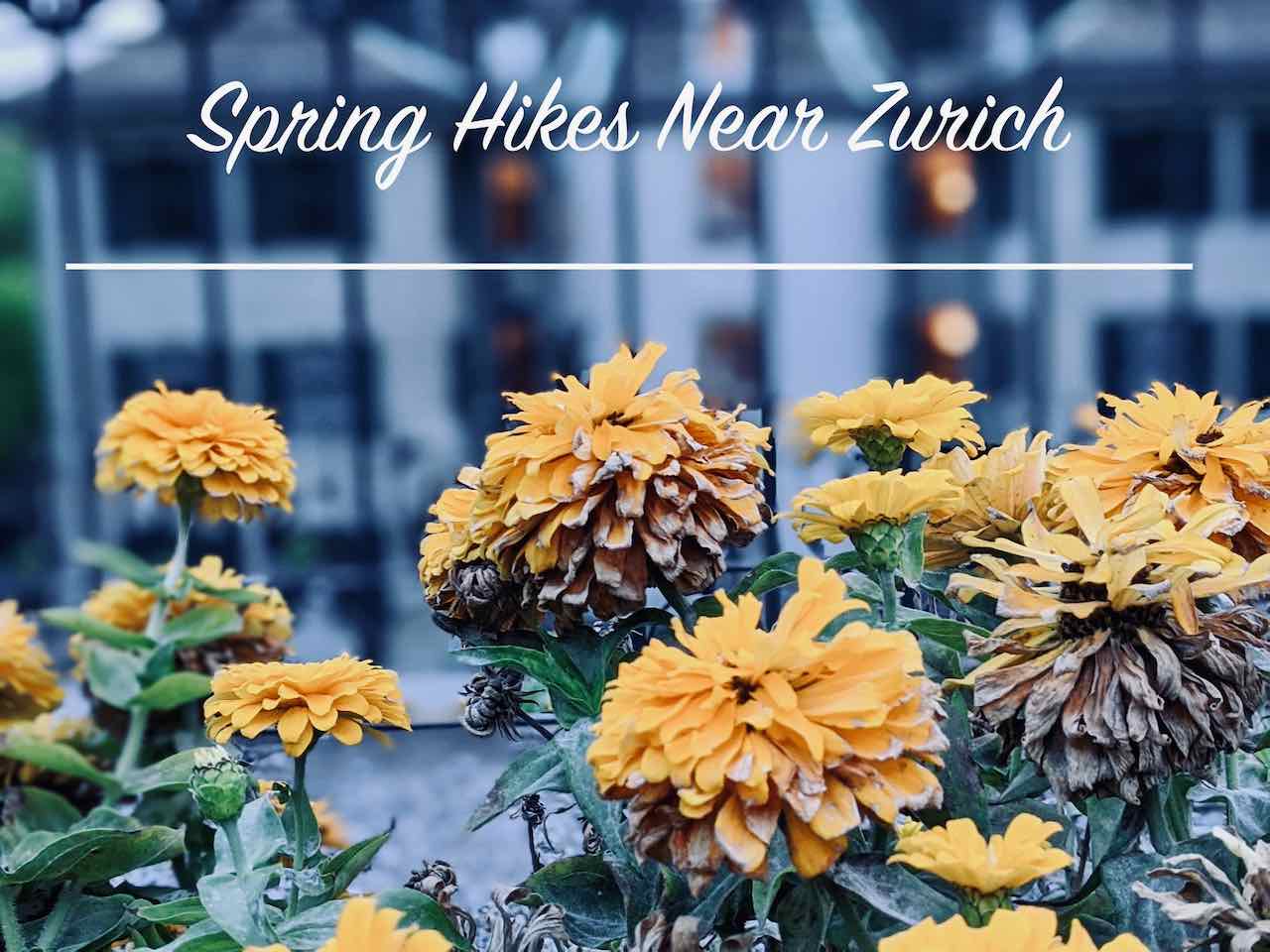 Spring – the time of the year when I forget about the winter and look forward to the bright summer ahead :D. In Switzerland, this in-between time is generally characterized by lots of meltwater and a sharp move towards warmer temperatures. It’s not uncommon to have nights that are below zero and also sunny afternoons that get up above 20˚C, even in early spring.

The Alps are often still heavily covered in snow for much of the spring, but the snow melts away a lot faster on the Jura and the gentler hills of the Swiss Plateau. The area within striking distance of Zurich has a surprising number of nice hikes for the spring and we’ve put a few of our favorite options below!

So the first one on this list is an old favourite in the nearby canton of Aargau – Lagern. Head over to the nearby town of Baden (just 15 mins by train) and experience a proper ridge hike from Baden to Dielsdorf over the course of 4 hours. The hike is not for those with vertigo but if you’re OK with the verticality of the path then you’ll be rewarded with a rocky ridge with a panoramic view of the Alps in the far distance! For a route map and more details see our post on it here.

Apart from a couple of features like Lagern and the Uetliberg ridge, most of the area close to Zurich is rolling hills, but there are one or two small gorges hidden away as well. This is one of those – a nice little gorge that’s practically in the suburbs of Zurich. As you can see from the pictures, we actually did this walk when everything was thoroughly frozen, but this should be a nice option in other seasons as well. It doesn’t have the grandeur of gorges like in Lauterbrunnen or the Schollenen Gorge (Lauterbrunnen is well worth it in the spring for the waterfalls, by the way!), but if you’re in the Zurich area then places like the Aabach ravine and also the Wehrenbach gorge on the other side of Lake Zurich are really nice options much closer to home.

Moving further past Zurich and into the hills of canton Schwyz you’ll find a gorgeous lake walk. Whether you’re arriving by car or by bus, head for the Wägitalersee in Innerthal. The lake is surrounded by mountains on all sides. In early spring the snow will still be hugging the mountain tops but should have melted off the roads allowing you to loop around the lake. It’s a pretty flat walk for Switzerland so if you’re not interested in much up and down but still want a good walk then this is a good bet. Plus – did I say the views were gorgeous? It’s barely an hour away from central Zurich :).

Moving on past the end of Lake Zurich you come to the Walensee – a lake with emerald green blue waters and giant cliffs rising above it! This area is good hiking ground for most of the year but the Rinquelle Waterfall is particularly worth a visit during the warmer spring days because of all the meltwater that fills it up. If there’s been a dry spell the waterfall may dry up at other times of year, so spring is a good option. Starting in Weesen, the walk heads through rocky tunnels, past the Rinquelle waterfall and through wooded forests and ends up in Quinten where a popular boat takes you across the Walensee to the nearest train station :). This is certainly a fun hike for all ages with good views and a boat ride to top it all off! We’ve described it in further detail here.

For those of you interested in a bigger spring walk, Wildspitz is a good option. At 1580m you might need snowshoes in early spring but not by the time April/May comes around. This year, for example, the peak was already pretty much clear of snow for part of March as well. We’d recommend having a look at the Wildspitz webcam to see how much snow you’ll have to cope with! Other than that it’s not the smallest hike so you’ll need lots of energy on the day to do it. If you make it to the top, the view is a sight to behold! From left to right it’s a panorama of snow-capped mountains with the iconic Mythen brothers to your left and Rigi posing on the right. If you don’t do this in spring consider it on one of those autumn days where it’s cloudy down in the valley and sunny on top – our picture is from an autumn hike and the atmosphere was terrific!

Between the end of Lake Zurich and St. Gallen there’s a stretch of medium size hills with compelling views of the lake, the Glarus Alps, Säntis and on a clear day even the Bodensee (Lake Konstanz). In here you’ll also find canton Zurich’s highest peak: Schnebelhorn at a respectable height of 1291 m!

We recommend starting at Hulftegg and heading up the Zurich Hohenweg (highway) ridge along route 69. Along this ridge, you’ll hit various peaks, including Schnebelhorn. The peaks Chrüzegg and Tweralpspitz are higher than Schnebelhorn but they’re in St. Gallen whose tallest mountain is the mighty Säntis. The hike ends at the cable car station in Atzmännig which some of the Zurichers would recognise as the top of a local ski resort!

The hike should be doable throughout the spring although we’d recommend keeping an eye out for the snow levels in early spring lest you have to turn around because of a recent snow dump!

Note that the Atzmännig cable car is closed in early spring – it’s already closed for the 2021 winter season, and reopening again on 17 April 2021; see https://www.atzmaennig.ch/en/. When the cable car isn’t running, it’s perhaps a 30- to 45-minute walk down to the bottom.

The Zugerberg is to Zug what the Uetliberg is to Zurich. It’s the local go-to peak with beautiful views and easy access. But why include it in the Zurich spring hikes post? Because Zug is just a 20 min train ride away from Zurich HB which is a shorter ride compared to some of the hikes above. And though Zugerberg can be climbed in any season, we think spring is a good option as it avoids the scorching heat of the summer and unpredictable foggy autumn days!

The hike up is mostly across open fields giving you nice views of lake Zug and the surrounding mountains! As you near the top, you’ll be able to see Rigi, Pilatus and the like. Zugerberg is more of a small plateau than a single peak, but if you’re after a peak then we suggest aiming for Hünggigütsch (yeah try pronouncing that correctly) or Hochwacht on the east side of the plateau.

There are always more hikes than can be listed so we’d like to mention a couple that nearly made this list and might be worth considering if you’re after more options.

8. Jura Hikes. The Jura is a great playground for hiking in the spring as the snow melts away quickly leaving the many gorges, cliffs and panoramic views accessible to us all! Hasenmatt (see our post here), the Gorges de l’Areuse, Creux du Vin, Chasseral (see our post here), and Lac de Joux are just some of the highlights. More off-the-beaten-path options include the gorges of the Teufelsschlucht at Hagendorf SO and the Wolfschlucht near Balsthal. We hope to share a best Jura hikes post in the near future!

9. Erlenbacher-Tobler Gorge Walk. We mentioned the Aabach and Wehrenbach gorges above, and this is another memorable gorge walk very close to Zurich – see more details on SwitzerlandMobility here.

10. Pfannenstiel Weg – also near Zurich, this hike takes you from one train line to another across and over the Pfannenstiel ridge which offers nice views of both Lake Zurich and the Greifensee lake. There’s a lookout tower near the peak that gives you a panoramic view of the area too. The path skirts its way through the woods making it a good option in many seasons! More details on SwitzerlandMobility here.