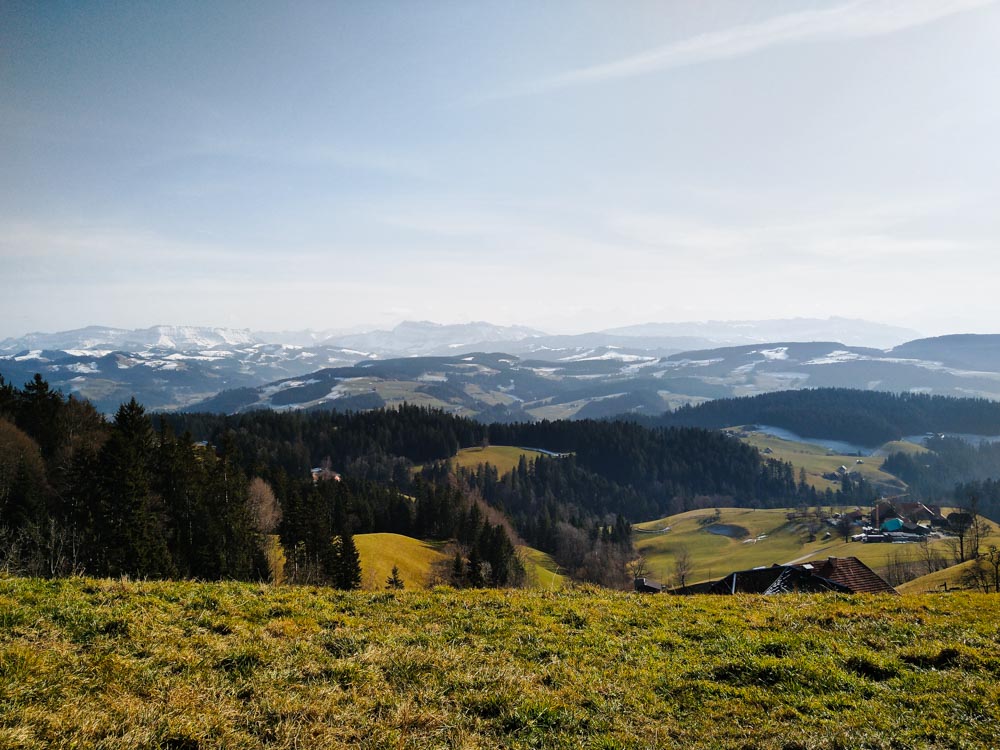 Switzerland has many funnily named places and today’s hike took us to two of them: Moosegg and Zäziwil, which sounds like something out of the Lion King.

This was a day when we wanted an easy hike. Something with not too much altitude, not too far from home and it had to have good views. In consideration of these criteria, we decided to hop on the train to Bern and head towards the town of Zollbrück somewhere in the middle of the Emmental region.

Getting off at Zollbrück Station definitely had one of those ‘I’m in the middle of nowhere’ feelings but we forgot about that quickly as we followed the yellow hiking signs towards our first target peak of the day: Moosegg! Many of the non-native English speakers we know wouldn’t be fazed by that name but every time I think of the word Moosegg it brings a certain smile to my face (by the way have you heard of Wankdorf in Bern 😛 ).

Most of the hike was a wide track up the side of a hill from which you could see the rolling landscape of the Bernese Oberland to the south. It was a sunny but very frosty morning so as we started heading up we could see the frost line melt away in the sun – it made for a very scenic frost covered hillside.

Our first pit stop was ‘Bergruine Wartenstein’ which is basically the ruins of an old stone fortification. There isn’t much left, but it’s clearly a spot where locals can have a nice BBQ in the summer. After this it was just a gentle but upwards walk towards Moosegg where we joined up with a hiking stage of the Alpine Panorama Trail 3. You’ll see markings and signs with the number 3 from Moosegg on up to the peak at Blaseflue.

Moosegg, at nearly 1000 meters, is a good spot to take in the view of the Alps. Admittedly, the day we were there we could only see the front ridge of the Alps. It was hazy and so the big mountains like Eiger, Mönch and Jungfrau remained out of sight. Slightly disappointing but we can’t complain – we’ve seen them many times before and no hike will be perfect. It also leaves something to be desired next time we’re in the area ☺.

There are restaurants and even a hotel at Moosegg and Waldhäusern where you should be able to enjoy the view with a meal, a drink or a small treat if you wish. We passed by quite early in the day so on this occasion didn’t stop at any of these places. Also, if I remember correctly they were preparing for a wedding at Moosegg later in that day. What a beautiful place to get married!

The next stop on our hike was Blaseflue (or Blasenfluh), the highest point along this panorama trail at 1118 meters. It’s a very flat peak compared to many of the other peaks we’ve been on but the view was still just as good! At the peak we found this bench installation. It might be difficult to appreciate it from this picture but it’s a super-sized picnic bench! We were entertained and spent a minute or two sitting around this giant bench ☺. It’s very typical in Switzerland to find such funny installations along the path!

From Blaseflue we started our gentle 90-minute descent towards the station of Zäziwil. The tracks were wide and it felt like we were strolling through a very large park with a very big view. We also found this sole tree on top of a small hill which seemed very photo worthy.

After our very laid-back descent we got to the town of Zäziwil. Whilst I don’t remember much about the town itself, I was very impressed by the carving skills of the person who created this owl! Another very impressive Swiss pastime. Anyway, with that we had made it to the end of our panorama trail – it fulfilled all the criteria I’d laid out at the beginning and we got home with our muscles stretched!

Now – the great thing about this hike is how customizable it is!

Here is a snapshot of the route we took.

Roundtrip Options By Car: If you’re coming by car you could park in somewhere like Signau, hike to Moosegg via Blaseflue and come back on foot round and down to your car.

By Public Transport: This walk is a fairly short journey from Bern, or also doable from further afield such as Basel or Zurich. There are various places you could start and finish from. For example, instead of Zollbrück, you could start your hike from Emmenmatt Station (12 km) to shave a couple of kilometers off the start of the hike (this skips Moosegg but still gives you most of the panoramic views). Or if you headed straight to the peak of Blaseflue from Signau station, it’s just under 10 km to Zäziwil station. You can also just follow the signposts for long-distance route 3, starting in Emmenmatt and ending at Grosshöchstetten, which also has a station.

The Emmental Cheese Factory: I’d like to point out that the Emmental show cheese factory or ‘Schaukäserei’ is about 17 Google drive minutes from Zollbrück Station. If you’re on holiday in Switzerland you could consider combining a visit to the cheese factory and to the peak(s) of Moosegg and/or Blasenflue for a full day trip in a very Swiss landscape! One of us has been to the Emmental factory in the past and I can confirm that it would have been nice to combine the trip with a little hike. After all, this area is quite a long way from the outskirts of Zurich!

Stockhorn – A Knobbly Mountain and a Thunderstorm