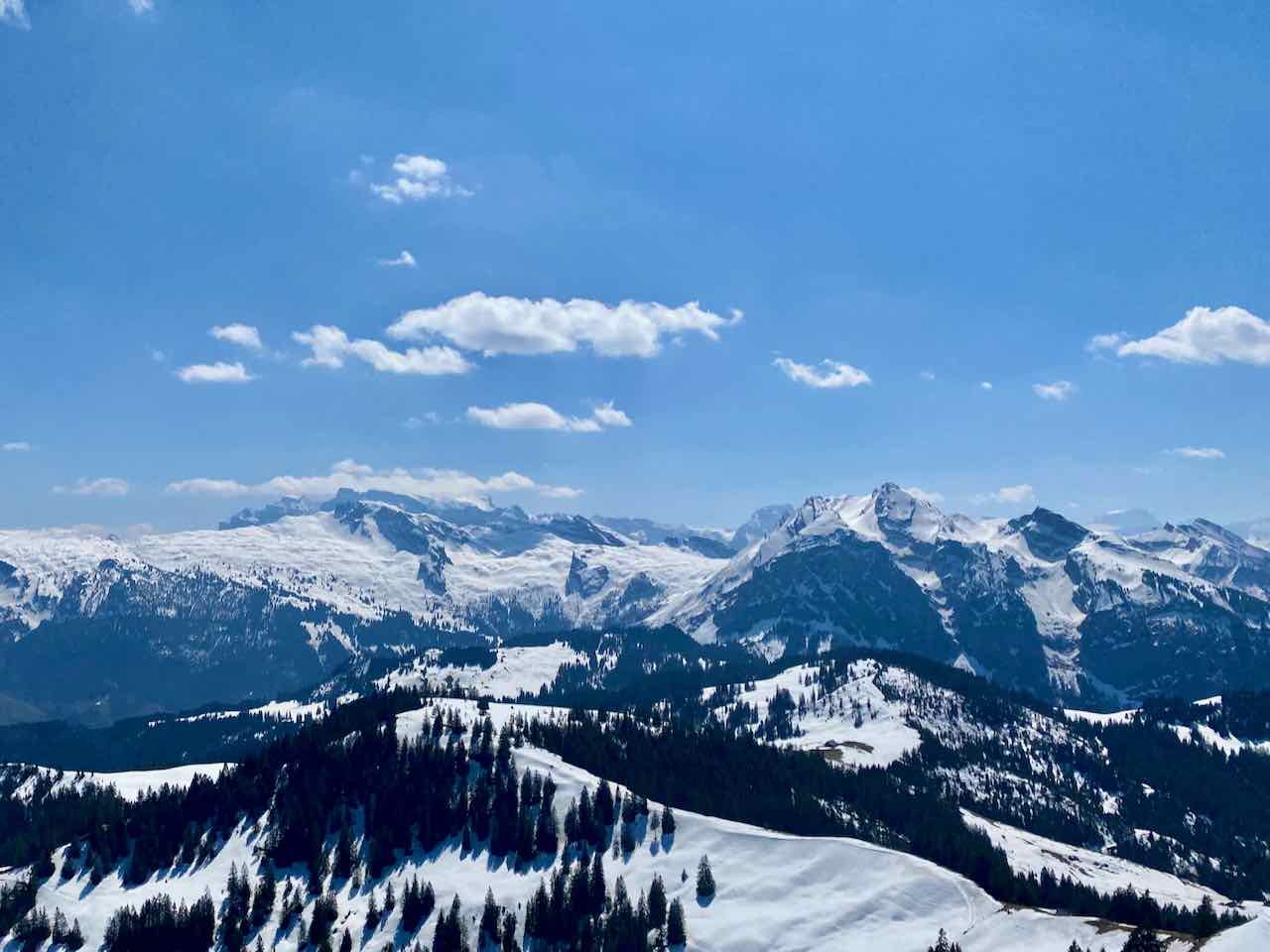 One of our earlier posts on this blog was of Gross Aubrig – Big Aubrig – and so it seems only fair to share our adventures up its little brother: Chli Aubrig – Little Aubrig.

We hiked up on a sunny spring day in April. I remember the bus ride from Einsiedeln to the start of the hike being particularly scenic. The Sihlsee lake was sparkling in the sun and had that mesmerising Alpine shade of blue.

We got off at the Euthal, Drusberg bus stop and followed an easy path along the Eubach stream towards Chli Aubrig. The first two kilometers were relatively flat and we passed Basa Beizli, a local farmhouse restaurant with good reviews! At the end of this easy bit, we turned right and headed up through a small gorge. Now, pay attention. There are two paths that turn right about 100 meters apart. You want the first one (at 934m) which sign posts you through Chilentobel. We were so deep in conversation with our friends that we ended up missing the turn and went up through a forested path on the other side of the gorge. This was a bit of a bummer because from the map that first path looks down into the gorge and we expected some lovely views of it. Online reports of it in German agree, so don’t make the same mistake as us :).

Also, before writing this post little did we know that you can actually canyon up the riverbed of this gorge! It’s just 3 meters wide in places and has got about 25 small pools to paddle around in. It also seems to have a 7 meter jump into a deep pool at the end of the gorge. You do need to know what you’re doing and have the right equipment, so don’t let us give you too many ideas. When writing this there also seemed to be lots of reports saying that fallen trees and wood have blocked some of the climbing holds. So, if you’re just hikers like us, stick to the hiking path. You’ll get nice views of it and stay dry.

Once you’re out of the gorge and into the glorious sunshine, you’ll find that this is where the climb up really begins! For the next 500 meters up you walk up through grassy alps, forest and a broad ridge to the peak. Follow the walking signs for Chli Aubrig via Trittli. Since we were there in spring some of the snow hadn’t melted as yet and the paths were a bit icy – nothing too treacherous though we just had to keep it light on the footing.

The peak itself was bustling. Like us many folks were up there around lunch time. It’s a great spot to stop, enjoy the views and fuel up! And if I remember correctly there’s also a Gipfelbuch (peak book) for you to leave your mark.

Now for the downhill. There are two paths down from the peak to Euthal. The first is going back down the route you came up until you get to the chokepoint at Wildegg. The second is down a slightly steeper but perfectly normal path back down. In our case we went down the alternative steeper route for variety!

Once you’re around 1500m, which is about 150 m down from the peak, follow the signs towards Willerzell. The walk back to Euthal is relatively gentle along this route though the sign posting isn’t that frequent along this path and so we accidentally walked all the way down to Willerzell instead of Euthal.

This was screw up number two of the day. Due to some lazy map reading we missed the turn point to Euthal and ended up following a slightly longer route than intended to Willerzell. This mistake turned the hike into a point to point hike instead of a loop hike. Since we were with public transport there was no problem. In fact, there were lots of busses along the lake and it made little difference to how long it took us to get back home. If you do intend to park in Euthal though then we’d recommend paying a bit closer attention to the path. Otherwise, it’ll take you about an hour, on the flat, to get back to Euthal from Willerzell.

Finally, if you’re interested in other hikes in this area you could consider the hike up Gross Aubrig.

As we described above, we made a wrong turn and ended up at a different bus stop than originally intended. The overall route metrics of time, distance and difficulty are pretty much the same. It’s just that you end at a different spot. Either ending is really no biggie unless you’re by car and need to walk the 3-4 km back to it in Euthal.

You can head up both Aubrigs in the same day, it would just make for a longer day and would not be a loop walk. The hike would end at the Innerthal, Post bus stop in the next valley over, which in itself is an amazing place to visit! In fact, it is one of my favourite spots in Switzerland. So the choice is really yours. Short or long, loop or point to point there’s lots of ways to play with this hike and we’d suggest opting for the route that suits you best!