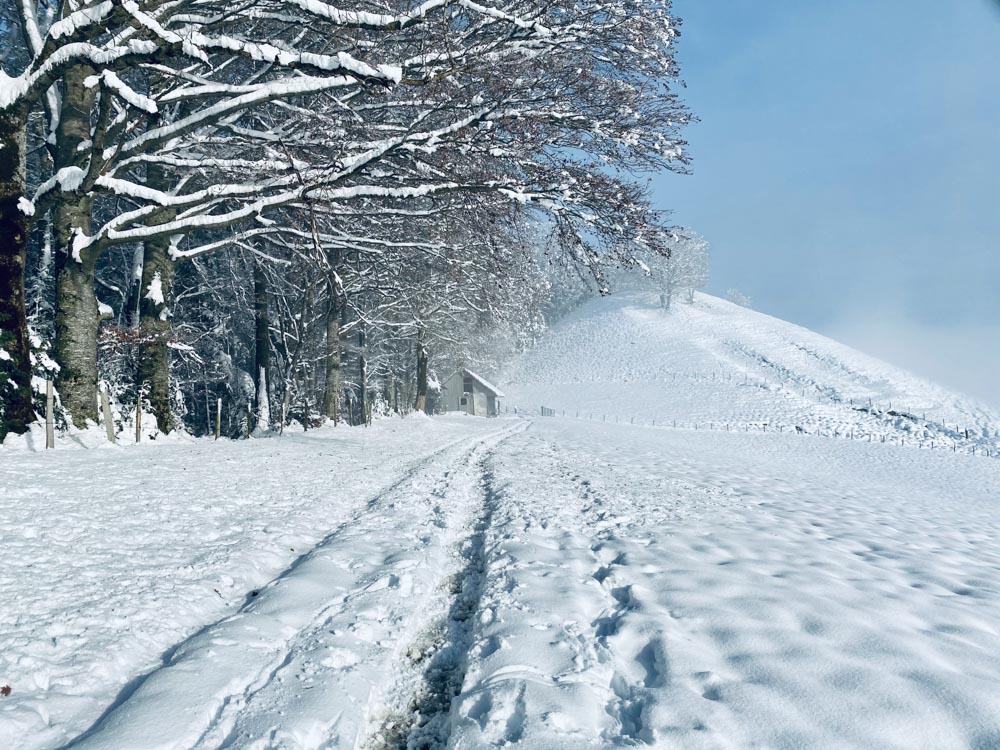 It’s been a bit gray so far this winter… There are a couple of benefits to winter though – one is the snow, and the other is potential of some sun if you can find a way to get above the cloud line! On this particular day it had recently snowed and the cloud line, based on checking various webcams, looked like it was around 900m. Another factor was that this pesky pandemic also makes tight gatherings of people rather less desirable, so we were also hunting for options that didn’t involve any use of cable cars! After doing some research and weighing our options we decided to head to Malters near Luzern.

A quick disclaimer first: if you’re here looking for winter hiking ideas, you might want to skip the first few paragraphs – we went quite off-piste on the first part of this walk, beelining it over snow-covered fields to a very foggy summit called Schwandenegg. Probably best not to do this unless you’re experienced and really good at map reading… If you’d still like to repeat what we did then good visibility and being very good with map reading would be a good idea. The second peak we went up, Chrüzhubel, is a bit simpler as you can basically follow the summer walking signs (you’ll still need to use a map though… 🙂 )

With that out of the way, let’s get started! We began from Malters station by following signs to Siten. The weather was grey and cloudy at this point, and we quietly wandered our way up through the suburbs of this little town. The further we got up the more snow there was to walk on. As the path took us into the forest, the snow thinned out a bit and we were being pelted with snow as it melted off the trees above us.

About 100 meters further up we were out of the forest and out onto snow covered fields. No more pelting here – the snow was stuck to the trees and we could see the cloud line wasn’t too far above us. Now as we mentioned there’s no direct path to the peak of Schwandenegg from here but since the hill wasn’t too steep, we decided to just create our own path up. It was about 130 vertical meters to the peak and so in shin-high snow we slogged our way up the slope. Good thing we had our gaiters on!

As we neared the top, the cloud came in and for a while we were hiking in the cloud. There wasn’t much to see besides cloud and a few solitary trees covered in snow. Snow- and ice-covered trees can look really impressive, but to be honest I was disappointed – the cloud line seemed to have risen and the sun was teasing me because we could see weren’t far away from blue skies. And we’d put in a lot of effort to get up that hill in that amount of snow!

But hey ho, we can’t always win against the weather. So off we continued down the peak and towards the funnily named spot of Scharmoos. From here we headed up our second peak for the day, Chrüzhubel. The two peaks are barely 1.5 km apart so it wasn’t much extra effort to have a shot at Chrüzhubel as well – and this time, it looked like lots of other people had already gone this way, since there were loads of footprints in the snow.

Having been disappointed once, we’d lowered our hopes of any sun today. But as we headed up the snow-covered path to Chrüzhubel though the cloud started to thin and that shining ball of sun in the sky got brighter and brighter. And then in a matter of minutes we turned a corner and were suddenly out into the sun! There were blue skies above and opposite us we could see forests fully covered in snow and the Pilatus ridge! It seems like that the 50 meter, or 48 meter to be super precise, difference between the peaks of Schwandenegg and Chrüzhubel made all the difference to whether or not we would be above or below that pesky cloud line.

There are even several benches right at the peak to relax on and enjoy the views. We spent quite a while on top of Chrüzhubel, playing around in the snow and really just enjoying the sun and blue skies. We knew once we started to head down, we’d be back in the grey for the next few days.

But since I was starting to get cold, we decided to head back down to Malters. Once we were out of the forest, we followed the (very quiet) road for simplicity to get down, though the signposted path skirts quite a bit of the road.

So, there you go, our little adventure crossing snow fields to the peaks, experiencing a white out in the cloud and finally finding some of that elusive winter treasure: the sun!

So, as we suggested at the beginning, if you’re planning to do this hike on a gray winter day it’s handy firstly to have a look at the nearest webcams to see if you’ll get above the cloud line. Once that’s checked, we would then suggest that you head straight over to Chrüzhubel via Siten and Scharmoos (and skip the first peak we describe, Schwandenegg) – this is the route we show on the map. It’s the highest peak along that ridge and so it’s your best chance of finding some sun.

A video of our adventure!