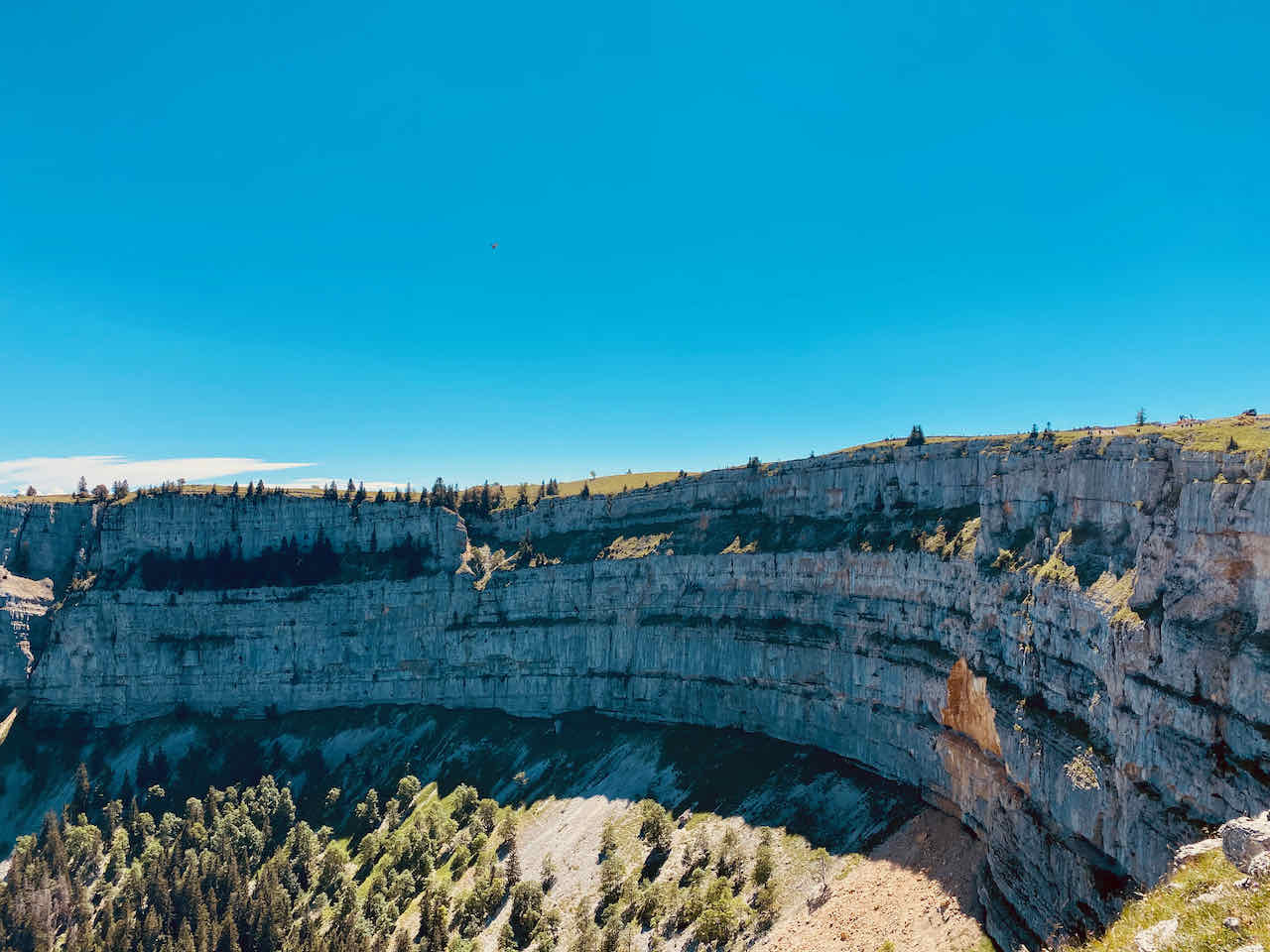 Creux du Van is one of the jewels of the Jura. In fact, it’s one of those bucket-list worthy Swiss hikes. Getting to Creux du Van took us to the western edge of Switzerland in the French canton of Neuchâtel or Neuenberg as the Swiss Germans call it. Apparently, in geological terms Creux du Van is known as a ‘cirque’. To non-geologists like you and me, this means that it’s a semi-circular cliff that was created by glacier melt and erosion. It’s no North Wall of the Eiger kind of cliff but its circular shape and depth of several hundred meters is what makes it so attractive!

Scroll down for the route details, maps and various other laidback options.

Noiraigue is the train station from where this loop hike begins. It’s a pretty popular hike so on a sunny weekend in the summer it was a matter of following the hikers once we got off the train. As it’s a loop hike there are several ways to get up it. For example we went up following signs for Pré au Favre and La Grand’Vy and chose to come back down via the 14 hairpins route to Les Oeillons. You’re free to follow this route or determine your own path up. There’s no right or wrong way to do it.

Now despite the many hikers, there are enough paths to the peak that the crowd soon begins to thin out and you’re left on your own at times with your hiking buddies to follow the signs, at least on our particular route. There are loads of paths criss-crossing each other so it’s really easy to miss your path and get lost if you’re not careful. Keep looking for those yellow diamond signs and white-red-white markings. If you’re not sure, refer to the Swiss Mobility App on your phone (see here for map app details) – getting lost isn’t so fun. Further on below, we’ve got a montage of the walking signs we followed up and down this path.

The path up was mainly wooded and the first 200 meters up to La Ferme Robert (a restaurant and car park) was uneventful. From here it was another few hundred meters up to Fontaine Froide (1126 m) from where we decided to follow signs towards Le Soliat Creux du Van via La Grand’Vy. From here there are 300 meters of altitude to power up through the forest before we reached the crest of this impressive rock formation!

Once you’re at the top you’ll meet loads of hikers who like yourselves are admiring the view or enjoying a well deserved picnic! Like everyone around us we were hungry by this point so we found ourselves a dry patch of grass, grabbed some grub and enjoyed the views around us.

After a bit of R&R (rest and relaxation) we followed the path as it hugged the crest of the cliff. The trail is pretty wide and keeps you well away from that precipitous drop off. It was quite windy at times when we were up there, so we were definitely giving the cliff edge some respect!

On the flat crest behind the cliff there were also a couple of fields of cows, at least when we were there, that fit in well with the Swissness of the walk. Speaking of animals, apparently ibex were introduced to the area in the 60’s and can sometimes be found scaling the 160 meter high cliff! If you’re lucky you might find deer and marmots around too.

This section of the hike is really the most picturesque part so our advice to you would be to take your time and enjoy it. As you walk along the crest there are many photo opportunities that capture different angles of the cliff. You’ll also find a restaurant, Le restaurant du Soliat, which is a nice spot to grab a drink or two from.

Once you’ve made it round the semi-circle though, it’s time to head back to Noiraigue. We continued our walk in loop fashion heading down via Les Oeillons. This path down is also known as the ‘sentier de quatorze contours’. In English that’s literally translated to ‘trail of fourteen contours’ which refers to the 14 hairpins that you encounter on your way down. Every other hairpin has a signpost with the hairpin number. Here again, pay close attention to the signs. One of the yellow diamonds that indicate the path had an X painted on top indicating not to go that way and a yellow arrow on the nearby tree redirecting you downwards in the right way.

Les Oeillons also has a restaurant and so with at least 3 restaurants on this hike there’s plenty of opportunity for food and drinks! Just make sure to bring cash, mountain restaurants in Switzerland don’t always take credit cards. From Les Oeillons, the path back to Noiraigue is fairly straightforward and takes you back to where this gem of a hike started. We really enjoyed this hike and hope you do too!

Route Signage! Here’s a series of the signs we followed to the top. You’re free to forge your own path or even go up anti-clockwise to us. Really up to you!

The alternative route we feature below requires a car. Since there are no bus stops in the area, the hiking route we describe via Noiraigue above is probably your best bet using public transport.

Easy Version: 6 km, ± 200 m ↑ 200 m ↓, 1h 40 min, T1 (easy)
Car Park 1: Restaurant Le Soliat. No address. GPS Coordinates: 46°56’09.8″N 6°42’56.5″E
You can park at the restaurant Le Soliat and then head off for an easy stroll to view the cliffs and surrounding area. The up and down is gentle and the paths are easy to follow. If you’re really done after seeing the cliffs and not in the mood for much hiking then you can take the shortcut highlighted in blue above to get back to the car park :). It’s a proper path and cuts the hiking time down to just 40 minutes.

And for those of you that love videos, here’s a montage of our hike up to Creux du Van!