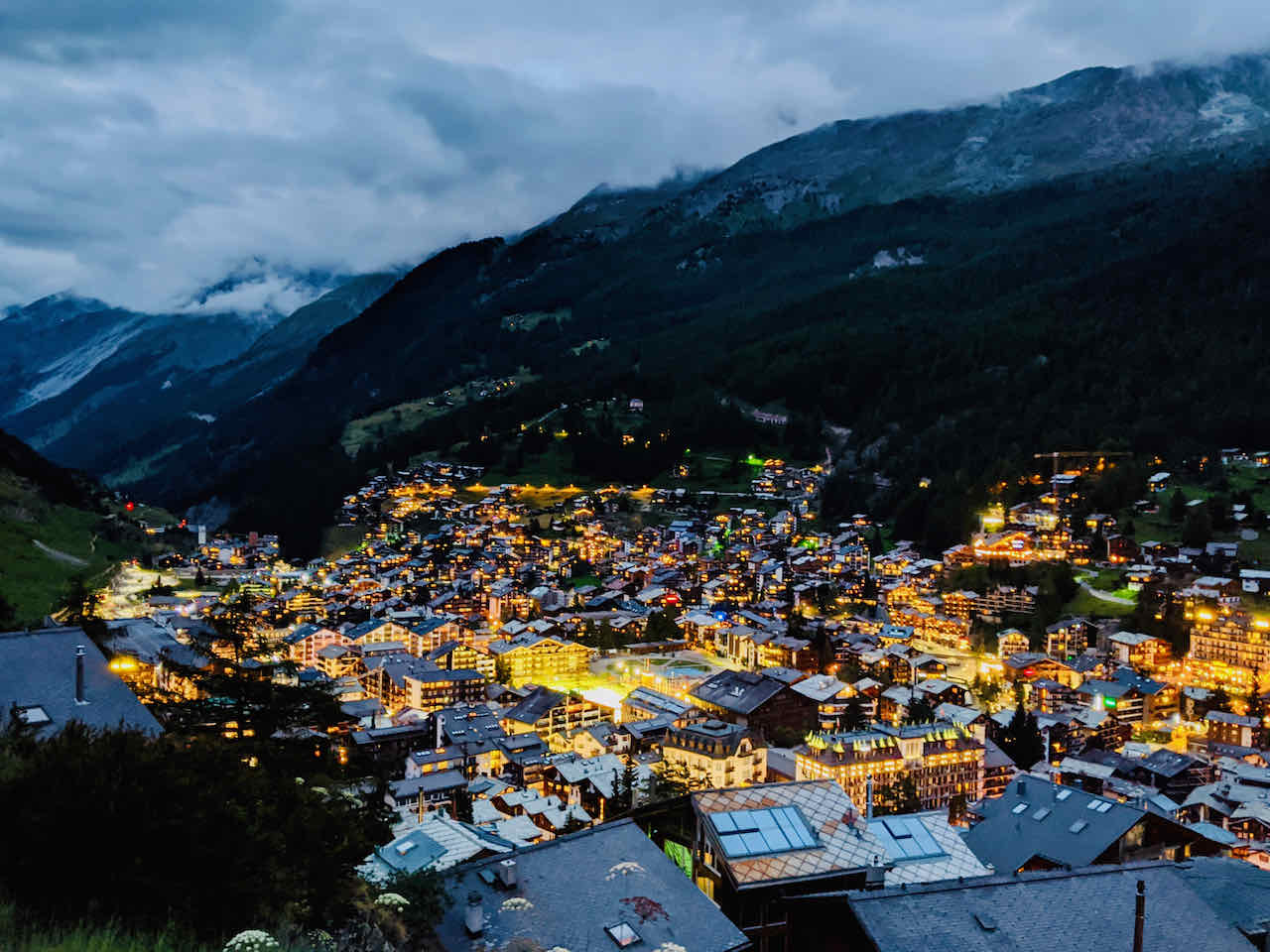 From impossibly hard hikes to casual strolls, we’ve found all sorts of hiking options in Zermatt over the years. This particular one falls towards the easy end of the scale and also has views of that most famous of Swiss mountains – the Matterhorn.

The hike starts at the train station (or in the town center) of Zermatt and first heads down the main street. You’ll pass St. Mauritius’s church building, which is a meeting point for various hikes in Zermatt. From here we took a right onto an alley called Schälpmattgasse. This lead us through the old town of Zermatt where we found these funny old wooden huts perched on what I call ‘mushrooms’. It turns out that these used to be grain stores for farmers back in the day and that those mushrooms shaped legs prevented mice and other rodents from breaking and entering! Clever way to keep them out, aye?

As you head up from Schälpmattgasse, this initial part of the hike follows what’s also known as the Zermatt-Zmutt Culture Trail. That trail is also relatively easy, but is longer than the hike we describe here and is more of a historic trail. It aims to show you what life was like in Zermatt before industrial modern day times. If you’re interested we’ve provided more details on this hike below. Anyway, after a bit of zig-zagging, we came to a T-junction with signs pointing left towards marker 5 of the Zermatt Kulturweg or right towards Trift. We headed right, following the Trift for a few minutes. However, Trift is nearly 700 vertical meters up from there so we weren’t following that path for very long!

By now, we had already caught a glimpse or two of the big cross that we were heading for, and as we walked along the fields the view of the city beneath us opened up as well. We did this as a summer evening after-dinner walk and really enjoyed the city lit up against the backdrop of the mountains. What was a bummer though was that it was a bit cloudy, and so we did not actually get to see the Matterhorn.

After a few minutes we arrived at a second set of signs as shown in the picture just above. This time we ignored the signs for Trift and followed the signs back to Zermatt. As we headed down we crossed a little stream, the Triftbach, and the cross was rapidly getting closer. The main path didn’t go to the cross, but there were one or two clear paths heading straight for the cross so we followed them. We met a gigantic sheep here in the deepening twilight, which was a bit intimidating but was fortunately on the other side of a fence! Once we’d passed the sheep, the cross was just round the corner, and it’s really quite a nice view of the city and if you’re lucky the Matterhorn too! The side of the cross facing the town is lit up – hence the ‘glowing cross’.

When we finally got there, it was quite dark but we still managed a few night photos and made our way back down into Zermatt. So there you go! A really nice short morning, afternoon or evening stroll starting right in Zermatt itself.

Here’s a map of the route we took…

We mentioned the Zermat Kulturweg earlier. It also starts in the city and takes you along an easy trail to a tiny hamlet called Zmutt via 14 historical way points. One thing we’d like to point out is that it’s described as a hike that’s 1.5 hours long and 3.7 km long but that’s just one way. So, you need to double that distance if you’re coming back the same way. There’s an easier option of continuing the walk from Zmutt to the cable car station at Furi and getting the cable car back down into Zermatt. This adds an extra 30 minutes to the walk which is mostly downhill and brings your total walking time to 2h.

Finally, for another hike nearby, check out our recent post on Gornergrat and Hohtalli here.