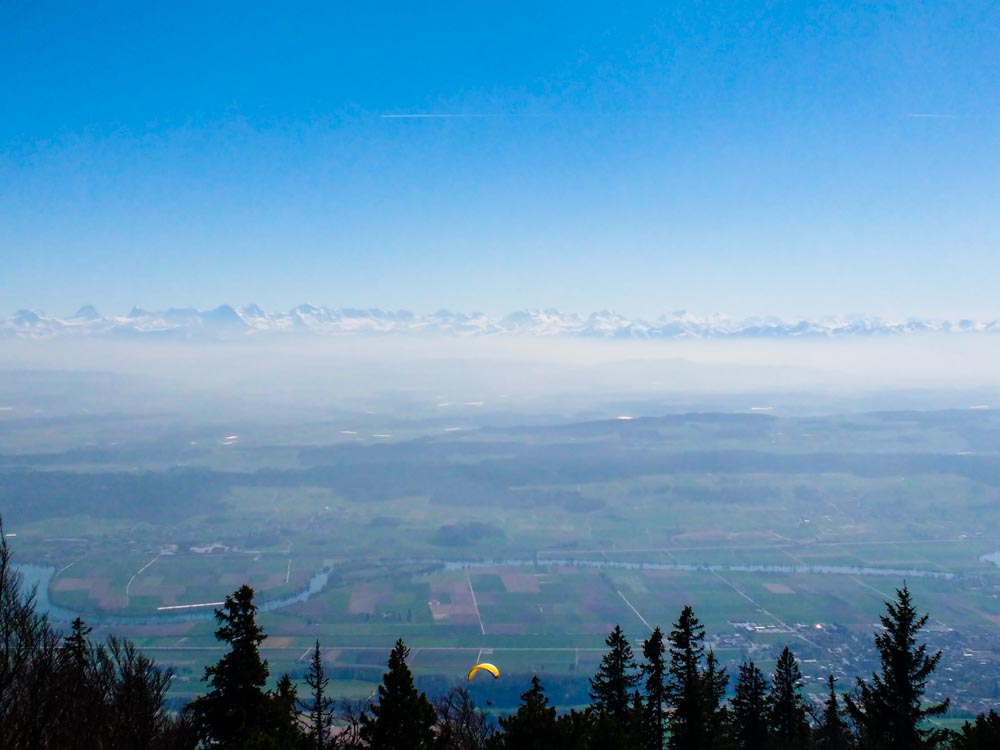 This is a peak in the Jura mountain range which we’ve been up twice, once in spring and once in autumn. Each time the view was a magnificent panorama of the Alps from left to right. A friend of ours nicknamed the peak ‘Haslimatt’ which sounds slightly nicer and slightly more Swiss to me 😛

The hike starts in Gaensbrunnen in the canton of Solothurn where you follow the yellow Swiss walking signs towards Hasenmatt. The path starts by winding its way up through the forest and it’s one of those hikes where you’re climbing up and up through the woods and you think ‘burn baby burn’ – at least that’s how my muscles felt. We came up this route in autumn which often means grey skies at the bottom and sunshine at the top.

True to form, our hike did indeed start off in a cloud. It was grey, wet, cold and felt rather drab. Not exactly the most appealing conditions for a hike but from experience we knew that sunnier moments awaited us on top. So we slogged our up away on various sizes of paths, tracks and even through a short stone tunnel. The autumn red, green and yellow tree colors were a pretty sight that kept us going.

At some point, the sky eventually started to lighten and we could see rays of sunshine breaking through. We were nearly up into the warmth! After perhaps 90 minutes of hiking straight up through the woods, the path broke out of the trees and into an open grassy field. We’d finally made it past the top of the clouds, and the view was starting to open up. We welcomed the sunshine and accompanying warmth by shedding one layer after another of clothes as we continued upwards. Not long after, we reached the main ridge of the Jura – once you get to this point, you’ve done most of the climbing, but there’s still a last bit of leg burn left! From here, the rest of the hike is also part of the number 5 Jura Crest Trail which runs all the way along the highest Jura ridges from Lagern in the outskirts of Zurich to the shores of Lake Geneva.

As we headed up the last few hundred meters to the summit, the Alps started to come into view and we noticed that we were truly above the clouds. And not just above a few clouds but a sea of clouds, looking dead straight onto the snow-covered Alps across the Swiss Mittelland or ‘middle land’ between the Alps and the Jura (Mittelland always sounds like something from the Lord of the Rings to me!).

The summit of Hasenmatt is a big rocky and grassy area sloped to the south – it’s a great place to stop for a picnic lunch. It also offers a huge panoramic view of what feels like the whole of the Swiss Alps. Boards showing what mountains you can see are quite common in Switzerland – there isn’t one on top of Hasenmatt (nearby Weissenstein probably has one or two around the cablecar station), but we reckon you can see the Alpine chain all the way from Säntis and Pilatus to the left, the distinctive big boy Alps of Eiger, Mönch and Jungfrau in the center, and perhaps even down to Mont Blanc in the distance to the right on a very clear day. Adding to the atmosphere was the view of the trailing Jura peaks to our right (the west) where the mountain tops were ‘peaking out’ of the sea of clouds. Once we got to the top, we stopped for a bit, soaked up some sun and and treated ourselves to some chocolate 😀

At the summit, Hasenmatt also has its own ‘Gipfelbuch’ (peak or summit book) where everyone that’s made it to the peak can leave a note and sign – and if you flick through the book you’ll also see that both kids and adults draw pictures in there sometimes too. 🙂 The book is in a little tin case attached to the back of the cross at the top.

Fun Fact: Hasenmatt is one of the most prominent peaks in the Jura, which gives you huge 360-degree views. The only more prominent peak in the Swiss Jura is Chasseral, which is further down the main Jura ridge to the west – for our Chasseral hikes, see here!

In some ways it feels like the hike is done once you reach the summit, but you get lots of nice panoramic views on the walk back down too. For us, the rest of the path was a relatively flat 6 km walk following the Jura ridge to Untergrenchenberg, where there’s a bus stop with buses back to Solothurn. You’ll find a restaurant there, also called Untergrenchenberg, for some food or drink if you fancy! There are also restaurants just north of the summit (Althüsli) and at the Weissenstein cablecar.

Hasenmatt is a hike that requires a decent level of fitness, so if you’d like an even more laid-back version of what we’ve done then we’ve outlined a couple of other suggestions below! Have fun 🙂

And finally, for dinosaur fans, there are also apparently dinosaur footprints on the southern slopes – these guys have an English-language description of where to find them: https://www.spectacularmountains.com/international/switzerland/hasenmatt/

Start: Gaensbrunnen
End: Grenchen, Unterer Grenchenberg
Time: 4 – 5 hours
Canton: Solothurn
Difficulty: T2
Altitude: ± 1000 ↑ 400 ↓ (or 450 ↑ 450 ↓ for the Weissenstein roundtrip version)
Popularity: 4/5 popular with locals, not so much with tourists.
Season: Spring to autumn – potentially too much snow in winter; check the Weissenstein webcam.
Peak: Hasenmatt at 1444 m
Nearest Railway: Gaensbrunnen or Oberdorf SO

Solothurn is well connected by train, and you can get from there to the various start/end points without too much difficulty. The trains should run all year, but the buses and the cablecar probably don’t – so worth checking before you set off!

You may see Gaenbrunnen written as Gänsbrunnen or Saint-Joseph which is the town’s name in French.

Hasenmatt is a peak with loads of options, so we’re not going to try and list them all. There are lots of vehicle tracks and paths around, and any combination of the four main entry points (Oberdorf SO, Weissenstein cablecar station, Untergrenchenberg or Gaensbrunnen) could make a nice walk.

If you’d like to make the walk smaller, there’s a cablecar up from Oberdorf SO to Weissenstein. If you start and finish at Weissenstein, the walk is about 10km in total, mostly on wide tracks and with only a few hundred metres of altitude gain.

Another not too strenuous option would be a round trip from Untergrenchenberg, where we saw a car park next to the restaurant.