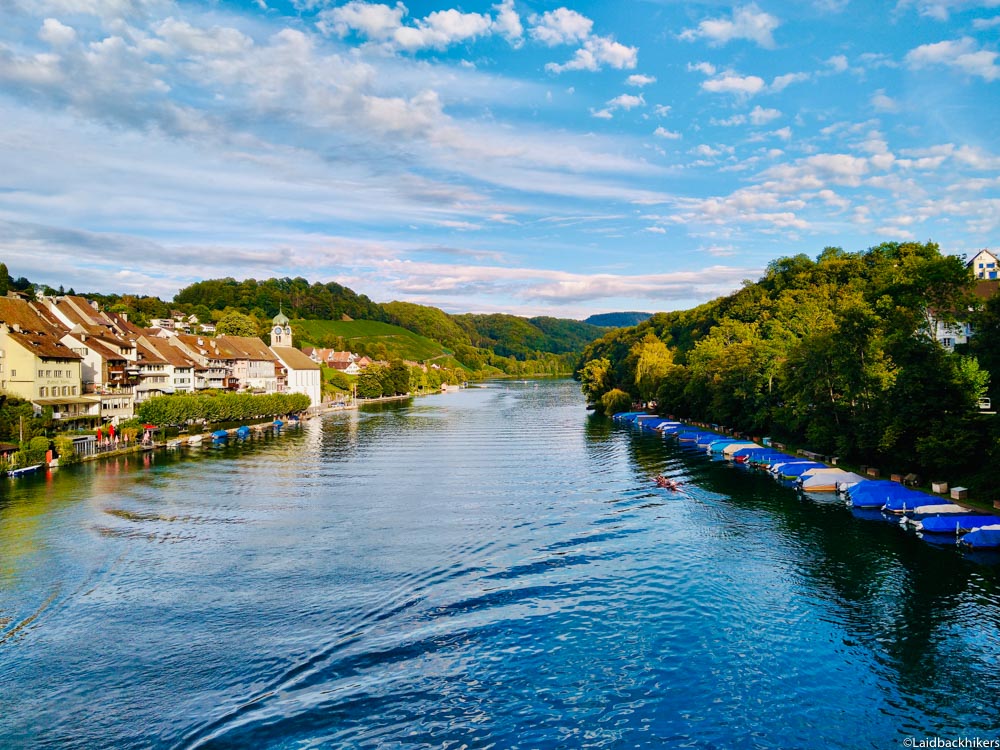 The need for a laidback summer evening stroll took us to picturesque vineyards following hiking route 60 on the outskirts of Zurich. As we filed out of Eglisau station with a small cluster of commuters one evening, the relative peacefulness of this small town just half an hour from Zurich was immediately evident. The tree-lined path at the very start of the hike, which headed through quiet suburban houses, only added to the effect.

The cluster of commuters thinned out as we carried on down towards the Rhine, which we crossed on a high bridge with nice views in both directions. The Rhine is very peaceful here, far away from its tumultuous start in the mountains and gorges of the Alps. There were even a couple of people heading upstream on stand-up paddle boards, and we can see why this stretch would be popular with the SUPpers!

On the other side of the Rhine, the signposts pointed us through the old town of Eglisau and towards vineyards clinging to the north bank of the Rhine. The combination of the grapevines, the late evening sun and the views down the Rhine slowed us down on this section as we kept stopping to admire the view. After perhaps 20 minutes, though, the path disappeared up into the forests above and after climbing up, it flattened out again to cross grassy fields, with views of the distant Alps opening up. The local signs made it clear that we’d crossed the border from Canton Zurich into the southernmost part of Canton Schaffhausen where it seemed like the vineyards and winemaking are also an important part of the local culture and economy.

The path we were following sloped gently back down towards the village of Buchberg, and views of the Rhine started appearing again, showing the river still peacefully flowing between heavily forested banks. After passing through Buchberg and stopping to take in the views near the local church, the path headed down more steeply through yet more vineyards and back across the Rhine into Canton Zurich again. Not too long after crossing the river, we branched off the path we’d been following so far, Route 60, to head along a small stream, the Flaacherbach, towards our final destination at a bus stop in Flaach.

With the sun setting behind us, there was still time for one more interesting sight – there were several fields of tobacco along the northern banks of the Flaacherbach, with tall broad-leaved tobacco plants flowering in one section and much smaller plants just getting going in another section. It’s pretty rare to find tobacco growing in Switzerland, so this was a surprise!

So there you have it – a relatively short and easy walk, but a very picturesque one in a peaceful area not far from the hustle and bustle of Zurich!

As mentioned above, most of the walk follows the longer Route 60 – namely the first half of Stage 5 of Route 60 (ViaRhenana). To make the walk a bit longer, you could consider carrying on up the Rhine to Rheinau using Route 60 rather than finishing the walk at Flaach. This will add a couple of hours to your walk, but it is mostly a flat walk up the Rhine. If you get to Rheinau, it’s worth having a quick look around – Rheinau is famous in particular for a large monastery (Kloster Rheinau) on an island in the Rhine.

See here for more information about Stage 5 of Route 60. If you’re interested in walking along other parts of the Rhine, Route 60 takes 10 stages to get from Basel to Konstanz along the Rhine…