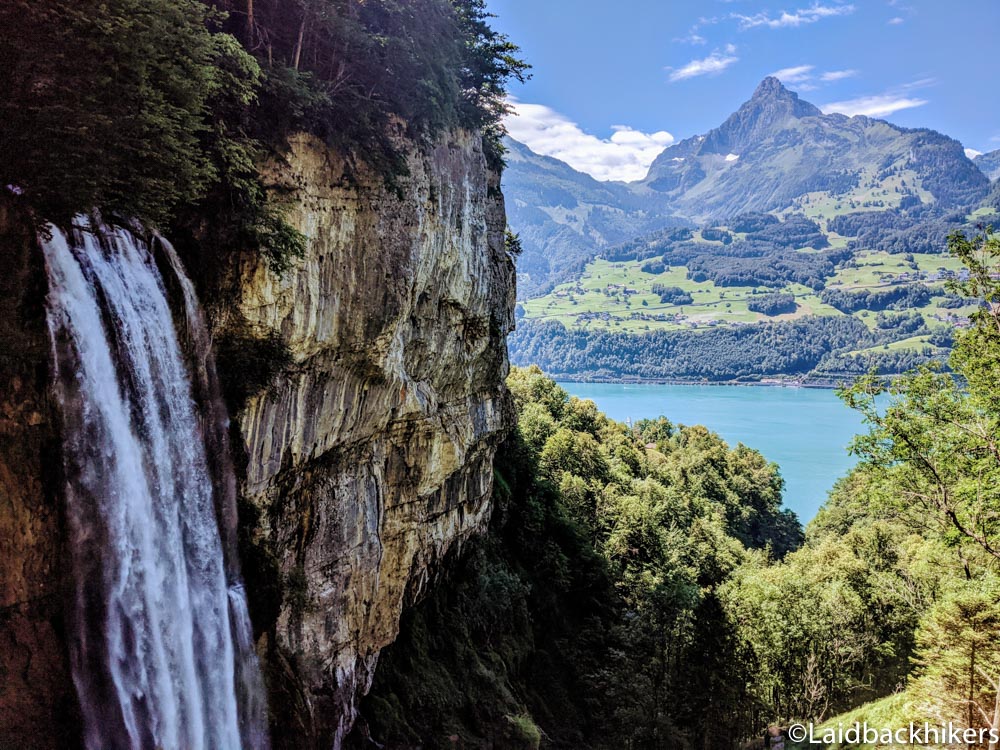 It was June, the start of the summer and already past 30°C – we wanted an easy hike and hoped to cool down later in the beautiful Walensee. If you don’t know the Walensee then here’s a tease – it’s a lake with emerald green and blue waters and giant cliffs towering straight above it!

The hike starts just outside the town of Weesen and ends at the ferry terminal in Quinten, halfway down the lake. We got off the bus at Fli, Hirschen and would recommend getting off here or latest the next stop (Fli Seestern) before the bus continues up towards the town of Amden.

We followed the road for a couple of hundred meters and then turned down onto a small road leading us to the lakefront. From here, the first 2.5 km of the walk is an easy flat stroll along the lake with the path occasionally taking you through pedestrian rock tunnels and picturesque viewpoints from inside the cliff. There were actually a few cars driving along this part too (the cliffs make it difficult to have both a road and a path!), but the road is narrow and windy and there were lots of other pedestrians so the cars were peaceful. There were many other hikers, but also lots of people carrying various types of water sport equipment – seemed like a popular spot for that!

After this initial stretch past the cliffs the path began to head upwards, and we started seeing signs that pointed us towards a little detour: the Rinquelle waterfall. We were keen on having a look, so we went for it…

I thought it would be easy to describe the waterfall and it is – the usual water falling down a cliff, pretty lake, big mountain opposite, nice picture to prove it below. :p But then I did some digging and realised there is something more impressive about it that I didn’t know at the time. The Rinquelle originates 49 meters up the vertical cliff you can see after flowing through a cave roughly 2 km long and 33 m high. To put that size into context – you could fit a 10-story building in that cave!

90% of the cave is underwater and can only be explored by intrepid cave divers. And to top it off the Rinquelle is actually just one part of a three-stage waterfall system known as the Seerenbachfalls, which is nearly 600 meters high. I do want to add a little disclaimer and say that often in the spring or when there has been a dry spell the waterfall apparently dries up – so it’s not picture perfect all the time. But there we go – there’s more behind the Rinquelle than the eyes can see :).

The closest you can get up to it is actually up the path past the official viewing point. Just follow this path up and it takes you across a little stream and around the corner where you get a really nice cooling effect if the falling water is being blown in the right direction.

After our detour, we returned back to the path and continued onwards and upwards along the lake towards Quinten. The path was mostly under the trees providing lots of shade for a sunny day but still with a few views of the lake and mountains. We eventually came to a fork in the road – follow the path down to Quinten or use a higher path via Bidem. Since we were feeling energetic we decided to go for the detour – 200 more height meters of sweaty uphill to go. Can’t complain really – we did this to ourselves! Once at Bidem, at 933 m, we followed the signs back down to Quinten – it was about an hour’s stroll back downhill. A couple of parts of this last bit felt like hiking in Ticino, with dry slopes and even some vineyards – I guess this makes sense, since these slopes are south facing.

Quinten itself is tiny, dotted with a few restaurants and the ferry terminal there. Since we still wanted a dip in the Walensee we continued for 10 mins along the path towards Walenstadt, found a spot to change and jump into the lake. Brrrr – there’s a reason this lake is not a favourite for swimming in Switzerland – it was pretty cold! It does warm up later in the summer, but remains cooler than the bigger lakes further out of the Alps, as the water is still relatively near the glaciers and snow patches it’s melting from…

Having cooled off we headed back to Quinten only to find that due to the popularity of the area the ferry we wanted to get was too full and we had to wait for the next one (there’s no road, so you can only get to Quinten by ferry or by walking). We headed to one of the cafes, treated ourselves with some wine and ice cream and waited for the journey back home! We really enjoyed that Sunday.

This is a snapshot of the route we took.

This is a fairly straightforward hike along a well-trodden path and lots of signs to point you towards Quinten. There’s no way to make the walk much longer unless you’d like to hike for another 2-4 hours. We’ve suggested a couple of shorter options below.

For a slightly shorter walk, skip the detour up to Bidem and head straight to Quinten.

If you are coming by car or just want to see the waterfall, you could turn around and head back once you’ve seen the Rinquelle.