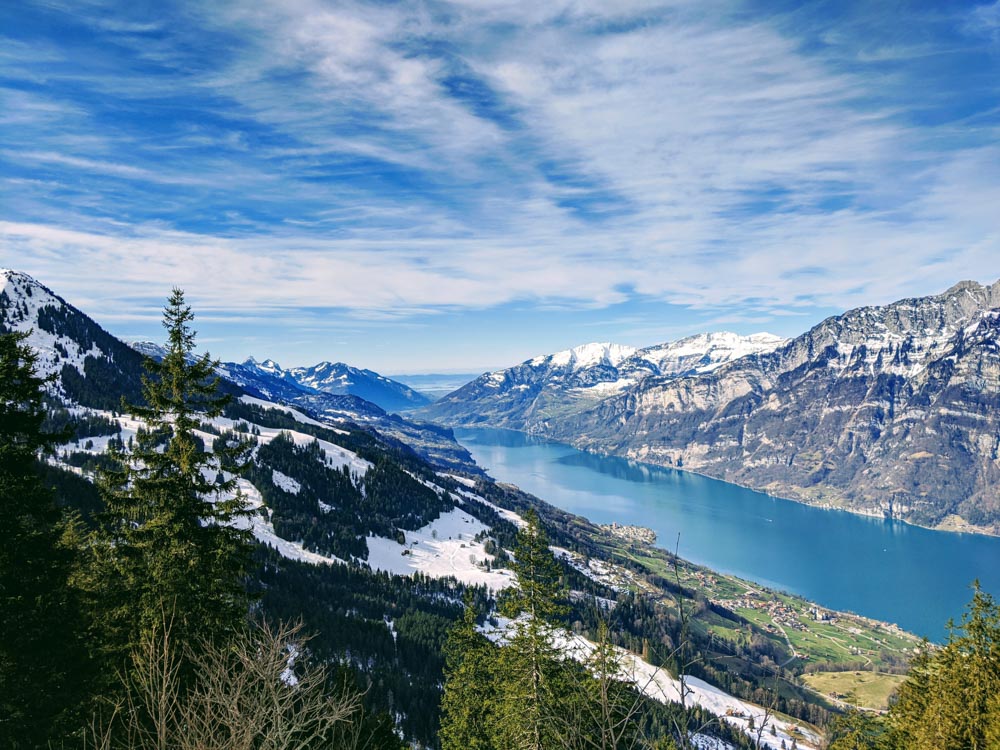 This was one of those spur-of-the moment hikes in search of some winter sun ☺ It took us to Flumserberg, known for being one of the closest ski resorts to Zurich. As well as the skiing, they do some pretty good winter walking!

To get to the start of our hike, we got off at Unterterzen train station along the Walensee lake. Signposted from the station is the Flumserberg Gondelbahn station, where the cable car takes you up to the ski resort at Tannenboden. This cable car station is right next to the train station with signs pointing towards it but if all else fails follow the crowd – there’s usually one at Flumserberg. Also, this is one of the few cable cars that’s free for those of you with a Swiss GA.

On the way up the first cable car stop, Oberterzen, comes quickly. Stay on the gondola and from there the cable car swings left and takes you straight up a precipitous cliff where the snow line began. From the windows of our cable car, we started to see skiers criss-cross each other and power down the slopes – it seemed to be a popular day for skiing. Once at Tannenboden we followed the skiers up the road for a minute and then straight on to the snow.

Once on the snow there was a series of large signs pointing us in various directions and the one we wanted was a large purple sign that said ‘Winterwanderweg’ which means ‘winter walking path’ in German. As we headed in this direction our end destination, Seeben, was signposted and we found all the typical winter walking purple signs and wooden poles along the patted down path. From here on the path is well marked and we were never in any doubt of where to go.

The path gently winds up the landscape with constant breathtaking views of the Churfirsten mountains on the opposite side of the valley. What made it even better was the weather, with blue skies, no wind and lots of sun. So, despite having started rather late in the day for a hike, around 1:00 pm, we dawdled and casually made our way up the path in all laidback fashion. At some point, the path brings you to a corner with a dead-on view of the Churfirsten peaks, the Walensee lake at the bottom and hilly green lands towards Zürich. By now, we were very happy with our choice of an afternoon hike. The view was simply gorgeous.

After this, the path continued upward past an old but well-kept barn where the main uphill bit of this hike starts. Walking on snow is always a bit more strenuous than on solid ground so take your time going up and enjoy those mountain views! I certainly did. The good thing about this path is that for the most part the skiers and the hiking paths are well separated except for on one occasion where the walking path continued across the ski piste and so we had to watch out for those high-speed skiers!

As we got to Seebenalp we didn’t actually realize that we’d arrived. We walked past a restaurant with a giant Appenzeller beer bottle on the outside and continued pounding on up until we got the map out and realized we’d already reached our destination and actually now we’d begun to loop around a small lake – which made us go ‘what lake?’

It turned out that the lake was completely covered in snow, probably frozen over and so we’d entirely missed it. It just looked like a flat piece of Alp covered in snow. So, we backtracked for a minute or two to the restaurant and treated ourselves with a nice ‘milchkaffe’ -– a latte for us millennials – and just stared away at the mountains enjoying the afternoon coffee fix.

At this point, we wanted to make the 16:16 train back to Zürich and it was about 14:50. It’d taken us nearly 2 hours to wander up this path so after our coffee we speed walked our way back. Going downhill on the snow is a lot easier than uphill. We made it back to the Tannenboden Gondelbahn station in about 40-50 mins with enough time to get the 20 minute cable car down to the train station.

We can’t finish our post though without sharing what was probably the best moment of our hike. Just before we getting off the slopes, we noticed orange confetti strewn across the snow which in Swiss style got us to nod our heads in disappointment at the litter. But a few seconds later we noticed people skiing down in all sorts of funny onesies and decorative clothes. We realized what was going on. It was a tribute to Fasnacht or Swiss carnival which had recently begun! This particular day was ‘schmutzige Donnerstag’ or dirty Thursday. And it certainly got us laughing! What a nice way to combine Fasnacht and skiing! The Swiss being so tidy will surely have cleaned up that confetti in no time.

But without much time to spare we scurried back to the cable car and comfortably made the train with time to spare! This particular day was definitely a good day to take off work!

Getting there by public transport
There are two options here – changing at Unterterzen as we describe above, or there’s also a bus going up from Flums as well.

If you’re heading to Flumserberg for hiking it’s probably best done by public transport because of how popular it is. Finding parking can be very difficult on busy days and you might end up waiting in motorway queues at the weekend. But entirely up to you!

Getting there by car
Drive to Flums and from there about another 20 minutes up to Tannenboden. On the way up you’ll pass by a similarly named place called Tannenheim with a completely different winter walk (see below) but keep driving up until you get to Tannenbodenalp where with the help of the parking address we provided above you’ll find parking. This is quite a popular spot for skiing and hiking so don’t be too surprised if you have to wait for a parking space.

For more information on route 171, including a map of the route, see here.

Apart from the winter walking path we described above, there’s another one at Flumserberg which you can consider if you’d like something a bit shorter. Instead of driving (or getting the bus) from Flums all the way up to Tannenboden you need to stop at Tannenheim and take the cable car from there to Prodalp, where the winter walking path immediately begins. You’ll find more info here. Have fun!