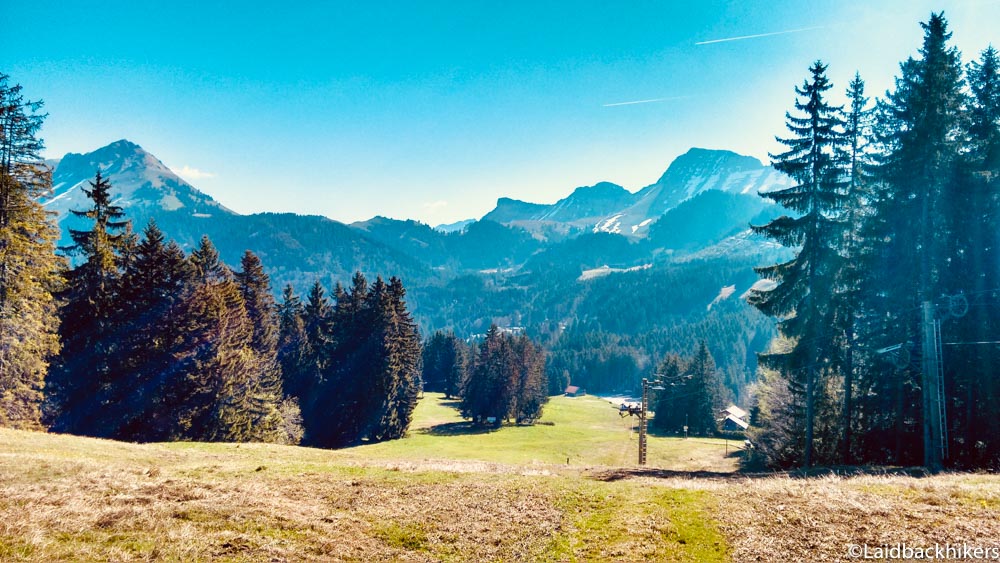 On a spring weekend trip to Lausanne we went out into the back hills of canton Vaud in search for some easy laid-back hiking. The route we chose was quite random in some ways and took us hiking through what would be local ski areas in the winter with lovely views of the French Alps peeking in and out of our sight.

We got off at a bus stop in Les Paccots and we headed for a small detour up and down a little peak called Corbetta. The path took us past a lake and restaurant called Lac des Joncs. Apparently, the restaurant serves fresh trout in the summer and if you’re keen the lake has a small walking path around it telling you about the animals and species that live in this allegedly 5000-year-old pond.

It was a clear day so once we were up Corbetta, we had a really nice view of the hills around us and the tall French Alps south of Lake Geneva. After soaking up the view, we completed our detour back down to Les Paccots and turned on to the main hiking path.

From Corbetta, the next part of our hike was downhill and took us through some cow-filled meadows that were quintessentially Swiss. From here, we went down a scenic forest path and across a little bridge over a gully and then it was uphill again through a series of forests and meadows.

If we had continued straight on this main path (sign posted as route number 3), we would have ended up at a train station called Lally where the ‘Star Train’ (Train des Etoiles) that we wanted to take back home doesn’t stop. So we turned right off the main path instead near Prantin, following signs for a ‘Claude Nicollier Space Trail’, and headed up a wide ridge towards Les Pléiades.

The highest point of this ridge was La Châ, just a few hundred meters from the railway station of Les Pléiades. Although most of the walk wasn’t particularly busy, all of a sudden it was teeming with  people enjoying sunny views of Lake Geneva (Lac Leman in French) and the French Alps!

Now for some interesting side notes – Les Pléiades turned out to be more than your typical mountain peak. Les Pléiades translates to ‘The Pleiades’ in English which is a constellation also known as the Seven Sisters in the night sky. The name explains the presence of lots of information boards and 3D diagrams of the solar system and galaxy that were around Les Pléiades (or perhaps the name came first, and then the astronomical information?). I could see why so many adults and children were interested – you were allowed to touch and move things around on some of the installations. And it turns out that the information boards we saw were just one of four parts of the ‘Claude Nicollier Space Trail’, named after Switzerland’s first astronaut. It’s a 5km trail and unknowingly we seem to have done a large chunk of it! It’s funny how much you can learn from a Google search.

Les Pléiades was the end point for our hike, so after a look around the summit we boarded the ‘Star Train’ back towards Lausanne.

This is quite a random hike that is easiest done by public transport. As such the alternative routes we suggest below are individual circular loops down at the two ends of the hike.

Circular loop starting and ending at Les Pléiades train station. Head downhill and then north following the signs for this trail towards Les Motalles. From here you continue north for a kilometer or so before getting off the main path at Prantin and looping back round to Les Pléiades. The trail is divided into four sections providing information on Earth, our Solar System, our nearest stars and the Milky Way!

By Car: there is no parking at Les Pléiades itself it seems. You can park below at Les Motalles instead.
Address: Parking des Motalles, Route de Lally 1807 Blonay

For those of you after a short hike, nice views and fewer people you could consider the small circular loop starting and ending at the Les Paccots, La Borbuintze Bus Stop. The path takes you to the peak of Corbetta before looping you back down to the lake and restaurant.

Creux du Van – A semi-circular cliff in the Jura