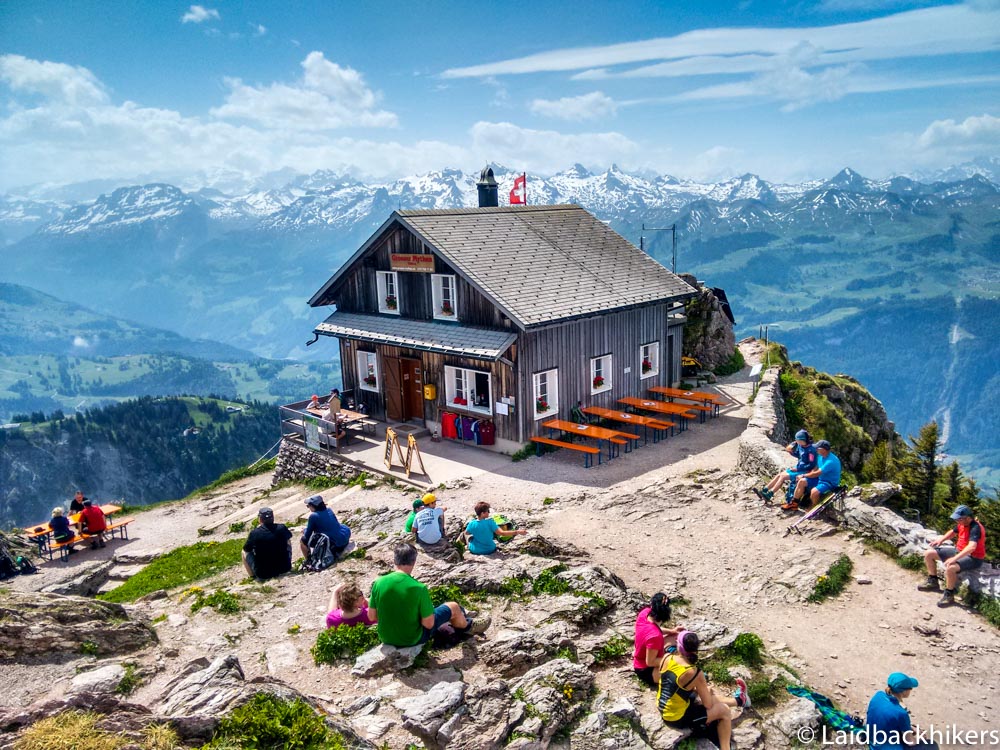 Grosser Mythen and Kleiner Mythen sit next to each other opposite the Rigi massif, and already as you come in towards canton Schwyz on the train, they make an imposing sight, looming over the valley. Kleiner Mythen is too hard for pure hikers – you need climbing gear – but Grosser Mythen is doable, making the choice between the two an easy one for us for this hike.

Grosser Mythen looked no less impressive once we’d got to the start point of our hike, at the top of the Rotenflue cable car. From there, the first part of the hike was actually downhill, heading down from Rotenflue towards Grosser Mythen itself (you can avoid the first part of the hike by using the smaller Holzegg cable car, but more on that later). I would say that this warmed us up gently, but it was already a hot day despite only being May.

The real hike starts once you get to Holzegg and start going up. Within a few minutes, the path had turned into a series of hairpins winding their way up a seemingly impossibly steep mountainside. Despite its popularity, this is actually a steep and fairly difficult mountain, and the only reason we were even trying it is because it’s actually well equipped with walkways and chains to make the most vertiginous bits safer. It’s a hike worth taking seriously…

With that warning out of the way, on with the hike! We’d chosen a quiet day (this hike can get really busy) and so we had plenty of space to make our way up the mountain, taking regular stops to catch our breath and admire the already impressive views – this hike can be a real leg burner if you’re in a hurry. Even with the chains, a couple of parts of the hike were an adrenaline rush, with big drops off one side or even both sides of the path in places.

Fun fact: we think there are 46 hairpins in total on the path up. You can follow your progress by keeping an eye out for the numbers painted on the rocks!

In the end, the path up is quite short, and we made it to the summit without incident. Even on a quiet day, there were plenty of people on the summit, but it’s surprisingly flat on the top and there are lots of good places to sit and enjoy the view – we found one and took our time to eat an early picnic lunch and enjoy the view. Somewhat implausibly, there’s also a small restaurant on top (cash only!). There’s a good reason this mountain is famous – the views are spectacular, with great views of Rigi, the Vierwaldstättersee (Lake Lucerne), neighbouring Kleiner Mythen and the nearby Alps.

There’s only one path up (unless you have some serious climbing gear, I guess!), and once we’d eaten lunch it was clear the clouds were only getting heavier – definitely time to call it a day and head back down the way we came. The path wasn’t any easier on the way down – it really is steep in places – but we also made it back down without incident. By the time we made it back to Rotenflue cable car station, we were completely enveloped in cloud even though it wasn’t even 1pm – good thing we didn’t leave this hike until later in the day!

The first option requires a train into Schwyz, followed by a short bus ride to Rickenbach SZ, Rotenfluebahn where you get to the bottom of the cable car. The cable car ride is very scenic and takes you to the start of our hike: Rotenflue (Mythenregion).

The third option, Ibergeregg Passhöhe, is the closest place if you want to walk directly from your car. There is a bus stop as well but it requires two buses from Einsiedeln station to get there. This adds a few extra fairly flat sideways kilometers on to the walk, but otherwise this is also a perfectly good option. Up to you really!