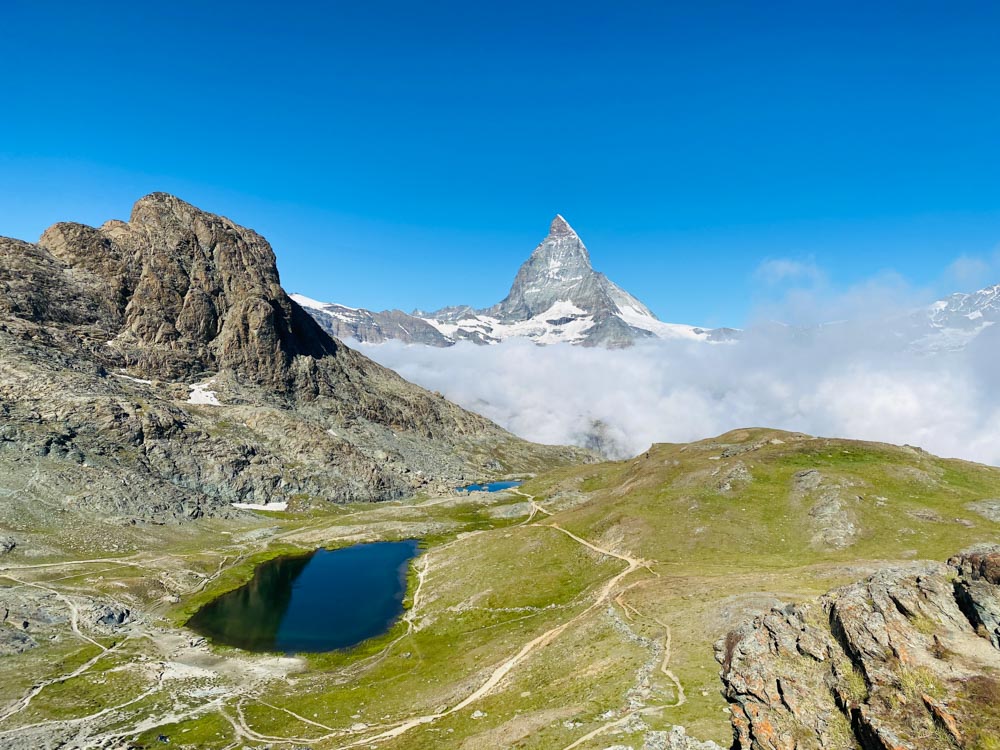 On the first day of a weekend trip to Zermatt we were up early and excited to get out and about. Our plan was to head up to Gornergrat with the train and from there walk up to a not-so-distant 3000-meter peak: Hohtälli! All this whilst having views of one of Switzerland’s most iconic mountains, the Matterhorn.

To our disappointment, the day initially started off with a sea of clouds above our heads down in Zermatt. But after a quick check of the webcams, we could see that this layer of cloud wasn’t very thick. Phew! It seemed that sunshine and views of the Matterhorn awaited us further up the mountain 😎

So off we went, riding up a cog wheeled funicular towards one of the highest train stations in Switzerland: Gornergrat. We had a fair amount of energy that day so instead of riding straight to the top we got off a station earlier at, Rotenboden, and hiked the remaining 250 meters up to Gornergrat. The views had already began to clear up and towering up above the sea of clouds we could see the Matterhorn!

It was a really nice rocky path up to Gornergrat and it seemed like a popular stretch, although admittedly there were more people going down than going up like us. We took our time hiking up, as at that altitude going up can feel like a lot more effort than at sea level!

After plodding our way up and enjoying the views, we made it to Gornergrat. The building there is iconic with its two giant globes containing telescopes for astronomy. We briefly went inside the building, which I believe is a hotel and restaurant, and to our amusement we found 4 chocolate moulds of the Matterhorn in light, dark, white and some other chocolate flavor! On the outside terrace of the building, you could soak in views of the non-edible Matterhorn, glaciers and a range of other 4000-meter peaks including Switzerland’s tallest mountain: Monte Rosa aka Dufourspitz.

From Gornergrat we wanted to continue on towards Hohtälli. So with our backs to the Matterhorn, we headed along the Hohtälligrat – the Hohtälli ridge. In the meantime, the cloud line that was hovering below us decided to pull itself a notch upwards. And so there were some points in the hike during which we were in total cloud and others where there were blue skies all around and above us! Quite entertaining I admit.

Despite the altitude, the ridge to Hohtälli is relatively doable. It’s a bit steep in places but well-trodden and well-marked. The part that proved to be an obstacle though was a snow patch that blocked our passage along the ridge. We saw one person cross it and clearly others had already forged a rough path across the snow as well, but many more turned back at this point. We attempted it briefly but it was narrow, icy and the steepness of it was a bit much for us so we turned and headed along the ridge back to Gornergrat.

As we retraced our steps, we couldn’t help but notice the alternative path, a wide easy track, below us leading up to Hohtälli. So, from the ridge we beelined down towards it and began our second attempt up Hohtälli. This path was much flatter but also very snowy which meant that the last 100 meters to the peak was a real slog! Despite it being the end of July, there was still deep snow on the ground, though it was packed down hard so we didn’t sink in too much.

We did make it to the peak and it was frankly stunning. Since most people didn’t attempt to go up it as we did, we ended up having the peak all to ourselves – quite a contrast from the hordes of people on Gornergrat!

Hohtälli also has a cable car station but it wasn’t running and our guess is that it probably only runs during the winter ski season. From the peak we could see that a path might continue on along a steep Alpine ridge towards a point on the map called Rote Nase (Red Nose) and then to Stockhorn. The normal path stops at Hohtälli though, so for the sake of safety the summit of Hohtälli was as far as we were going to go! Having enjoyed our climb we headed back down retracing our steps along the track back until we came to the Gornergrat lake (Gornersgratsee).

It was a picture-perfect round lake from where you could take one of those famous Matterhorn-reflection-in-the-water pictures. But as luck would have it, it was windy! And so the water was the opposite of still! This meant that we could not get one of those reflection pictures. Too bad, we’ll just need to come back to Zermatt another time!

From there it was straight to Rotenboden were we got back on the mountain train back to Zermatt. So there you have it. One of the most scenic Matterhorn hikes out there!

Even in summer the ridge route between Gornergrat and Hohtälli may have snow along it preventing you from getting to the peak. In this case, you could try taking the lower route (see map below). This route is also easier than the route we initially tried as it completely avoids the ridge and takes a flatter path up to the summit.

Finally, for another hike nearby, check out our post on walking up to the glowing cross next to Zermatt here.