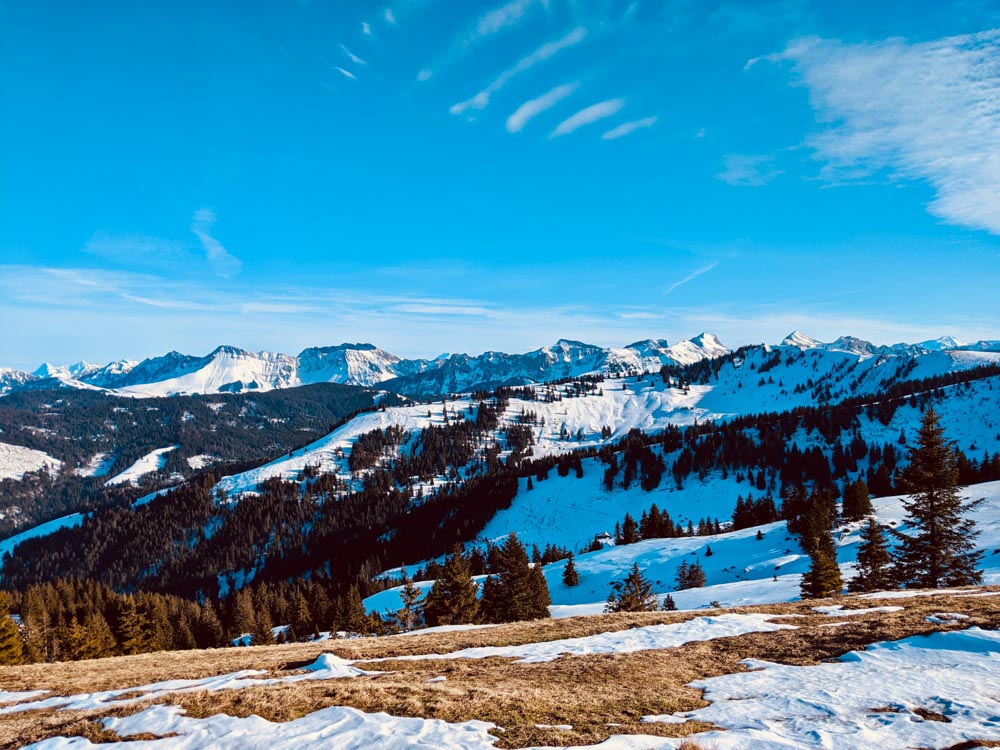 So, I’d originally started this post by saying it was a view ‘to die for’ but that would be an exaggeration and my partner laidbackhiker contested that statement immediately. So, I’ll stick to saying that the views on this hike, especially at the top, were breathtaking! What made the hike even more memorable was the mini one-person igloo that we built on our way to the peak. And admittedly this wore us out enough that we barely made it up to the peak in the end!

This hike is in a part of Switzerland that’s difficult to get to by public transport. It’s certainly possible but it takes what feels like forever from Zurich. So, on this occasion we got off at Fribourg station and rented one of the Mobility cars from SBB’s car sharing scheme and drove about 20 km to the bottom of the La Berra cable car in Le Brand.

Normally in a snow-heavy winter this hike is a snowshoe trail but with a patchy winter season we didn’t actually need our snowshoes at all. The hiking route is signposted from the end of the car park. You’ll find yourself following purple snow shoe signs that take you up along the ski lift line in the direction of ‘Coursimbert’. Although there wasn’t enough snow to warrant snowshoes, hiking on a layer of snow is more tiring compared to normal. We like to say that it uses a different set of muscles!

To be honest, the first hour or so of the hike wasn’t spectacular. It was a normal hike up through the forests where we briefly also followed the yellow summer walking signs. This took us past a stream with loads of frozen icicles and natural ice ‘sculptures’ hanging about – they don’t look impressive in photos but it’s pretty cool to see frozen icicles dotting the side of the path.

As we continued upwards, we started to get views of the Alpine foothills along with Lake Gruyere below us and the Jura in the distance. Once we’d made the turn left towards Cousimbert we started to get high enough that there was about 10 – 15 cm of snow on the ground.

Surprisingly, that’s enough to build an igloo with. We didn’t plan to make one on the day – it started off with a few precisely aimed snowballs at each other, then we created a few snow angels on the pristine slope and finally we thought heck – let’s try and see if we can build an igloo. It’s not the first time we’ve done it and once we made one on the Zugerberg in Canton Zug that was large enough for two people to comfortably sit inside.

We started piling up the snow around in a neat little circle and continued building up from there, which is probably not how you should build a real igloo but it’s good enough for something this size. Looking at the timestamps on my photos I can say that it took us exactly an hour to go from inception to a fully built igloo. That was a lot of arm muscle exercise! We then spent another 20 minutes taking turns crawling in and out of the igloo whilst onlookers laughed and grinned as they went by! Here’s what it looked like.

At some point while we were admiring our little igloo we realised that the last cable car down from the cull by the La Berra peak was at 16:30 but it was 15:25 and here we were still admiring our igloo. Woops. So we continued upwards and onwards as fast as we could. We knew we would make it to the cable car in good time but we weren’t sure if we would make it to the peak which was 90 meters higher than the cable car station.

Once we got to the plateau where you go left to Le Cousimbert and right towards La Berra the view suddenly really opened up and it was jaw dropping. Yet another distraction! We could now see the nearby Alps, and the views didn’t let up from here, with panoramic views of the Alps trailing southwards towards France from the summit.

From here, we could see that the peak was within reach and that if we were quick enough, we’d still make it before the cable car closed. So, with a dash and a sprint we headed up for it! We got there but didn’t have long at the top. It was just a brief stop to catch our breath and admire the view. We hurried back along just in time to grab the cable car down!

If time had permitted, we would have stopped at the ‘Buvette La Berra’ restaurant at the top of the cable car to sit back and enjoy the panoramic view of the Alps over a glass of wine but alas not this time! It was quite a view though despite not being a particularly famous mountain in Switzerland!

Here’s the route we took. As we foreshadowed earlier, this is not the most public transport friendly area of the Alps to get to. For one there are apparently no busses to La Berra on weekdays. On weekends, we had just two sensible connections there in the morning and two on the way back. After 16:30 there are no busses back and so you need to carefully plan your hike around the bus times! We often use public transport anyway but for this particular hike we decided to only do the first bit to Fribourg by public transport.

From most cities this car park should be easy to reach. The car park was 5 euros for the day when we were there in Feb 2020.

If it’s not winter by the time you read this – this route should also make a nice summer hike, as the summer path takes practically the same route as the winter one.

For a more laidback version of the hike: just take the gondola immediately from the car park up to the plateau just below the La Berra peak. From the top you can walk up to La Berra and back down (about a 1 km roundtrip) and can then enjoy some time at the restaurant Buvette La Berra. You can extend the hike a bit by walking towards the peak of Le Cousimbert Käsenberg (cheese mountain lol) if you like. It’s mostly flat and you get a constant panoramic view of the Alps!