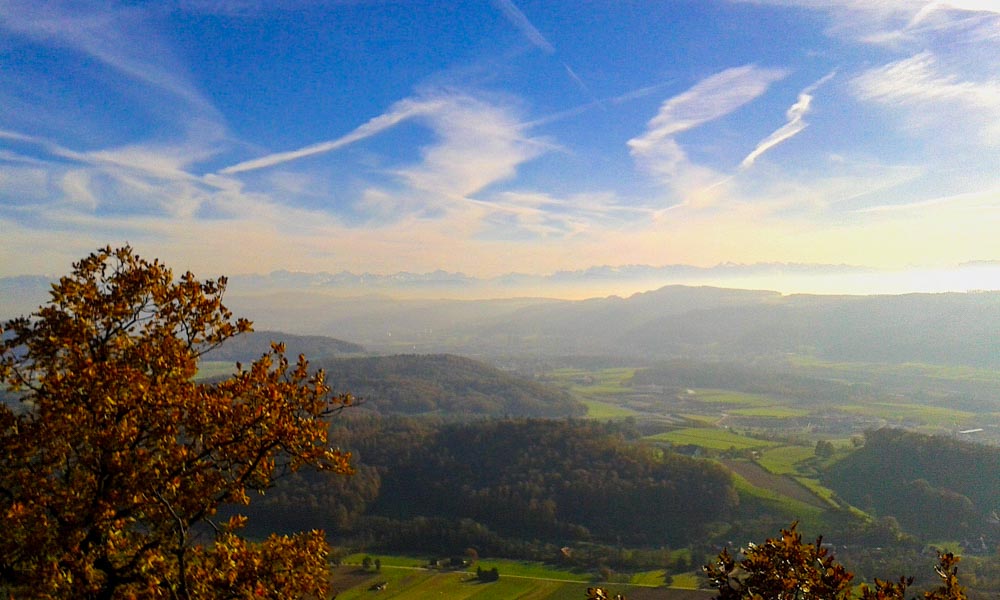 Just 15 minutes from Zurich Hauptbahnhof, this is one of the few Alp-like ridgey walks near Zürich. It’s definitely more challenging than the Uetliberg but nothing the surefooted can’t do.

The path starts at Baden station – yes you do have to go to canton Aargau for this one – and the yellow walking signs point you towards the peak ‘Burghorn’. You’ll notice the red-and-white mountain stripes for this peak – it’s unique in the area because it’s the only Alpine-like walk for miles around.

From Baden station you take Aargau’s most beloved (and sometimes out of service) outdoor lift down to the picturesque Limmat river front and follow the signs along the river which eventually bring to you to Baden’s covered wooden bridge. In the summer after you cross the bridge there’s often a little ‘boat bar’ called Triebgut which is a tempting stop but I’d suggest to continue on without any beers this early in the hike.

Once you follow the signs across the bridge and under a road you’ll start going up a staircase with houses on one side and a giant rock on the other. The path isn’t difficult and if you’re in doubt look for the yellow diamond. The top of the staircase gives you a hilltop view of Baden, its castle ruins and the surroundings. A little further up and you’ll find yourself at Schloss Schartenfels (also a great place for a drink in the summer) from which, if you’re lucky, you’ll have a distant view of the Alps.

From the castle you follow the path on up which starts with a warning about the exposed path: ‘only for hikers who do not suffer from height vertigo’. We agree, we wouldn’t recommend this as a hike for those afraid of heights. We weren’t quite smart about that and so it was one of my first hikes in Switzerland. I remember it being hard at the time. Then again, I’d never done any hiking in my life. For the Swiss, it’s probably a breeze of a path.

Once you’ve committed, from the castle on it’s one foot in front of the other for a steady hike upwards! An hour or so later the path gets narrower and the ridge is, well, even more ridge-like. The path also gets steeper and you begin to have to do small rock scrambles. As you continue along the ridge there are some secured metal ropes that give you support and some pretty nice views of the Alps if you’re lucky. The rocky ridge lasts for a good 90 minutes between the start point at Schloss Schartenfels and where it ends into a flatter forest. From the forest onwards, it’s an easy 30 min hike up to the first peak, Burghorn, where on a clear day you’ll get another view of the distant Alps, along with some of the German Black Forest in the opposite direction. You’ve also done pretty much all the uphill walking by this point, so it’s a great time for a snack or two!

Fun fact: This ridge has two peaks. The slightly lower peak called Burghorn and the ‘real’ peak called Lägern itself. There’s a whopping 7 meters of height difference between the two.

From Burghorn it’s another 2 hours or so on to the end. This part is much easier and goes past a weather radar station with a giant ball on it, a restaurant called ‘Hochwacht’ (reopens in early 2020 after renovations) and takes you down into the tiny town of Dielsdorf. If you’re keen to reach the very top of Lägern, keep an eye on your map and on the left side of the track – the real peak seems to be in some castle ruins just off the left side of the track. If you’ve got to Hochwacht, you’ve gone too far!

The Lägern ridge is also part of a ‘Planetenweg’, which is a popular concept in Switzerland where the solar system is laid out to scale along a path. We didn’t pay much attention to it, but Pluto is at Burghorn with the rest of the solar system between there and Regensburg. You’ll find more details on this website (German only).

To Baden: Baden-Bahnhof is a fairly major station and can be reached with direct trains from Zurich, Basel and Bern within an hour.

From Dielsdorf: this end of the walk is slightly more complicated, but you should be able to get back to Zurich Hauptbahnhof (main station) within half an hour or so, either from Regensberg, Dorf bus stop or by walking on down to Dielsdorf station if you’ve still got some spare energy.

The hike can be done in the opposite direction if you like, from Dielsdorf to Baden. Beware though that the hardest part of the hike will then be at the end of your hike.

Car Roundtrip Alternative: For those of you travelling by car, you could park in Baden, which has lots of underground car parks. You can get back from Dielsdorf to Baden by public transport, but it probably won’t be fast. Instead of that you could turn back at Burghorn and go back the way you came or there are also easier paths back to Baden on either side of the ridge – just keep an eye out for signs to Baden. The part of the ridge from Baden to Burghorn is the steepest and most impressive.

Finally, depending on where you read it you might see Lagern spelled as ‘Lägeren’, ‘Laegern’ or ‘Lägern’.

Hiking along the Rhine near Zurich: Vineyards from Eglisau to Flaach