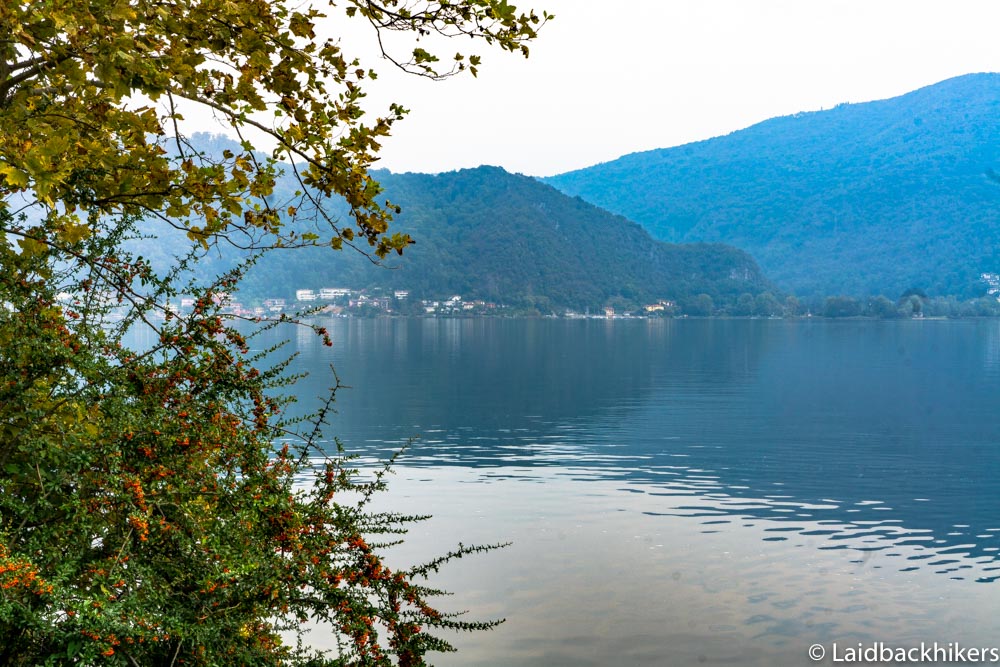 Ever heard of your Swiss colleagues collecting chestnuts over the weekend or wondered where you can pick them yourself? We stumbled across a full forest of them on a short hike one warm October weekend in Ticino.

The peak we summited was Monte Caslano (otherwise known as Sassalto), which is named after the village of Caslano at the foot of the hill. It’s most easily reached by car but it’s also served by a train station (Caslano) and a ferry station (Caslano Lago), though we’re not sure if there are any regular ferries…

On this particular weekend, we had visitors who weren’t up for strenuous hiking but wanted to enjoy the scenery and the lake. On the map, we spotted this little hill on a peninsula that sticks out into Lago Lugano and said hey this looks nice. There’s an easy path for the visitors and we could dash up the hill whilst they walk around on the flat. And that’s just what we did.

Once we got there we also learned that the peninsula is a protected area in Switzerland due to botanical and geological features that I’m not much in tune with. If you want to learn more there are apparently 15 explanation boards placed along an easy trail that circles around the island.

There are actually many trails on the peninsula. Our visitors took the flattest option that involves wide tracks that circle the island whilst we found ourselves going up 250 meters to the peak and descending down to an agreed meeting point (see route maps below).

During our hike up, we noticed that the forest floor was absolutely covered in sweet chestnuts. It was the first time in Switzerland that we’d come across this and we collected some to take home and try. We don’t know much about picking chestnuts but we just went with the best-looking ones that didn’t have any holes and thus a potential for worms. Just don’t confuse them with horse chestnuts (or conkers) which have a fleshy bumpy husk compared to the very prickly husk encompassing sweet chestnuts.

Ooo and whilst I’m sure there are many Swiss German names for sweet chestnuts the most common ones I know about are Kastanie (uncooked) or Marroni (roasted).

So there you have it, a short hike or stroll in Ticino combined with some sweet chestnut collecting, a nice way to spend an Autumn weekend in Switzerland 🙂 .

As mentioned above there are many trails around the peninsula and you can take it as easy as you like. The maps give you an idea of what’s possible.

The train station in Caslano is less than a km away from the start point of the hike and if you’re really in for a lazy day see if you can make use of the ferry terminal Caslano, Lago to get to the peninsula.