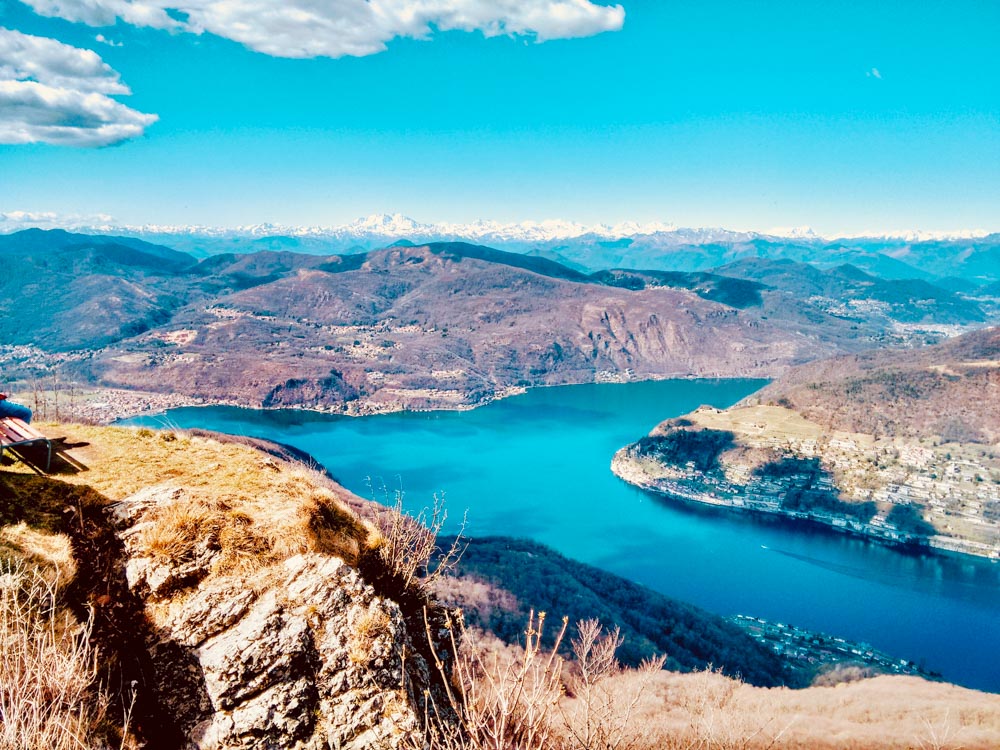 This hike starts in the picturesque village of Meride, home of Monte San Giorgio, or as its nickname goes, “Dinosaur Mountain”. It’s a nice hike through wooded forests and on old mule tracks, but the main selling point here is actually the view from the top, which is one of the best panoramic views of the Alps we’ve seen in Switzerland – that’s quite an achievement considering what Switzerland has to offer!

This mountain is also a UNESCO world heritage site for having a wealth of dinosaur fossils, although there don’t seem to be any visible during the hike. Meride itself has a dinosaur museum if you’re interested in seeing some of the fossils they’ve dug up here over the years.

The circular loop we chose up Monte San Giorgio starts off easy, taking you out of Meride and onto a flat old mule track for the first kilometre or so upwards through some meadows. At the crossing in Crocefisso, we opted for the path that headed up on rocky paths entirely through the forest. The path was steep in places but nothing too intimidating and in no time we found ourselves at the top.

At the peak you’ll find a relatively flat area with a small hut and some distinctive red benches where you can enjoy the view. And that view is simply breath-taking – whilst much of the mountain is covered in trees, the northern side of the summit drops off sharply and you have clear views of the Alps to the north across Lake Lugano. You’re perched 1000 meters up in the heart of Ticino looking towards the snowy Alpine ridge, with all the big mountains in the distance and Lake Lugano glistening below you. It’s quite a sight.

We’ve climbed Monte San Giorgio twice – once in the spring and once in the winter, when there was snow on the summit to add to the atmosphere. In the winter version of this hike there was enough snow to nearly cover the benches, but the hike still seemed to be popular despite the snow making it harder going. Depending on the time of year you might be able to buy some drinks in the hut, though we think it’s just self-service with an honesty box.

After enjoying our time on the peak we headed back down to Meride, initially retracing our steps back down from the peak to a fork point. Not wanting to go back exactly the same way we came up we decided to head back via Cassina which has a little chapel along the path – quite a common sight on walks in Ticino. The way back down was shorter than the way up and also relatively easy. From Cassina onwards the path winds its way back down the forest to Meride and much of the way back down is on an old mule track.

Once we got back, we had some spare time before our bus arrived so we wandered through Meride which was charming with its small alleyways. We also poked our heads in the fossil museum and at the entrance were impressed with a reconstruction of the aptly named ‘Ticinosuchus’ found on Monte San Giorgio! If we’re ever back in the area I think we might enjoy a visit to the museum. In the meantime, we hope you’ve enjoyed this post and our adventures up Switzerland’s very own dinosaur mountain.

First, a practical note: quite a lot of weak trees in the area seem to have recently come down during bad weather (in October 2020), particularly on the east side of Monte San Giorgio, leading to several path closures. The paths we suggest here appear to all still be open though.

We did the walk as a small loop. As an alternative, you can simply walk directly up from Meride via Cassina and then come back down the way you came – this is a bit shorter.

Finally, another tip for the walk – as you head up we suggest keeping an eye out of cordoned off areas where you might see people excavating for dinosaur fossils. We saw one of these areas during our winter trek up the peak.

Monte San Giorgio is historically a bit far for a day trip from northern Switzerland, so we’ve done it when we were staying in Ticino. However, with the Monte Ceneri base tunnel opening in a couple of weeks, Zurich to Melide will come down under 3 hours, so it should be possible to do as a day trip for those of you in northern Switzerland!

And of course our route map: