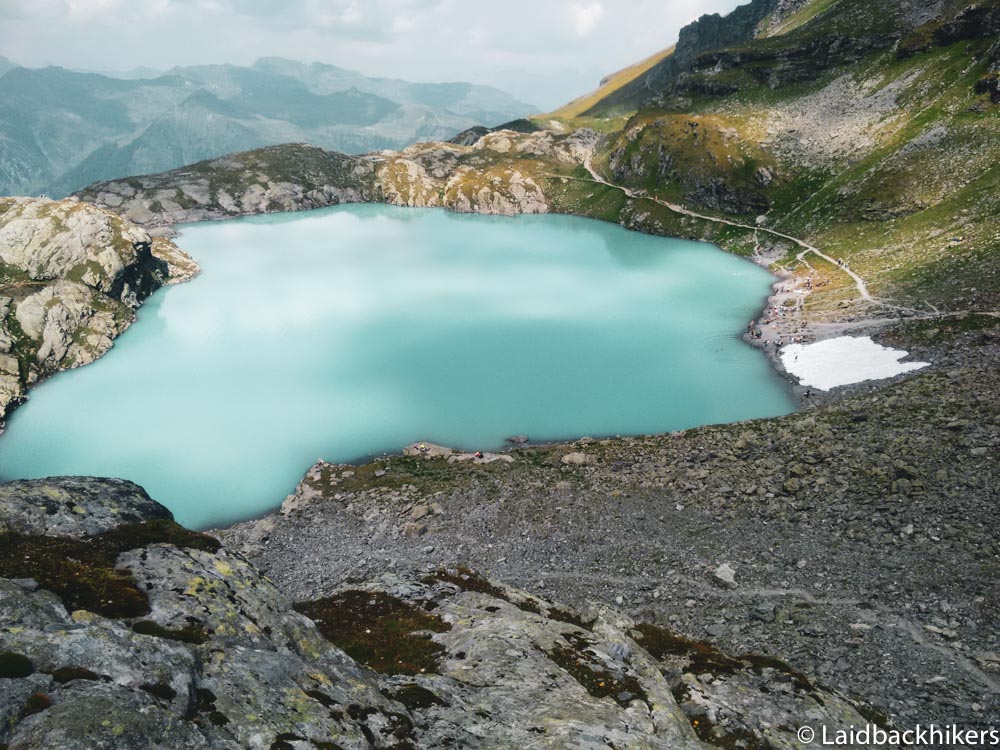 This is one of the most famous hikes in the region, and with good reason. The journey from Zurich to the beginning of the hike is already impressive, taking you past the Walensee (‘see’ = lake) and the huge cliffs on the south side of the Churfirsten – an imposing ridge along the lake.

Although not far from Zurich, this journey has lots of changes even if you come by car. Using public transport, you get off the train from Zurich in Sargans where you switch on to a local bus to get to the bottom cable car station. After that, you head up a procession of 3 different gondolas and chair lifts to the starting point of the hike, which is already at over 2200m above sea level.

Starting at this height is a great way to escape the 30+ degree temperatures down in the valley in the summer but it’s also why this hike is mostly only doable for 2-3 months a year – it’s high enough that the rest of the time snow covers parts or all of the paths!

We hadn’t planned for this but it turned out that we did this hike on August 1, Swiss national day, along with quite a few other hikers for whom this was probably a very Swiss way to celebrate the day. One useful tip for this hike is to get a fairly early start, since the last chairlift down from Gaffia is at about 16:30 which isn’t very late when you include pit stops for lunch and swimming!

Now all the advertisements for this hike say that you see 5 lakes on the route. Factually though it’s 4 lakes unless you make a short detour at the very start of the hike to the first lake. We didn’t know that at the time so we saw four of the five lakes – not complaining though, they were gorgeous! If you are interested in seeing all five lakes we describe below in the route section how to see the first lake.

But on with the hike. The last cable car on the way up takes you to Pizolhütte where the path begins. From here it’s 270 meters up to the second lake, Wildsee, which appears once you reach the crest of Wildseeluggen – essentially a viewing point and the turn-off towards Pizol, the 2844m peak that gives this hike its name. The path up Pizol is not part of this hike. It’s an Alpine path and not one to go up on a whim. There’s also a small glacier at the foot of Pizol, though the glacier has been melting away and has almost disappeared in recent decades. …

Although I’m not a fan of hikes with lots of up and down, the next bit of this hike is a 160m downhill stretch to lake number 3: Schottensee. You can see this lake from a little distance as you approach it. Careful on the way down, it’s quite a rocky path and may be steep in a few places for those not accustomed to mountain hiking. We saw many people having lunch along this lake and a few brave souls getting in for a cold swim!

We continued along now heading back up 170m in search of lake number 4: Schwarzsee (black lake in English). Hiking above 2000 meters means that the atmosphere is a bit thinner and so at times this short but second stretch of up felt quite tiresome! There were a fair few clouds around that added a lot of atmosphere to the wild landscape and gave us a good excuse to take breaks and take in the view.

At around 2500m we reached the highest point of this hike. From here we could see Schwarzsee and after a quick breather we began descending towards it. Save for a few minor up bits, from here on the path generally heads down another 200 meters towards the fifth and final lake: Baschalvasee. As this was the last lake along the hike, some of my fellow hikers decided to brave it and dip in the water for a swim. They didn’t last long but did enjoy cooling off in an Alpine lake. I stood on the shore and relaxed – you weren’t gonna get me in there! Brrrrrrrr.

On the way from Schwarzsee to Baschalvasee, you’ll encounter a minefield of cairns – hundreds of mounds of stones that give you an idea of the large footfall this trail receives throughout the year! It’s certainly photogenic. After this last lake, Baschalvasee, it’s 300 meters downhill to the cable car station at Gaffia that takes you down back into Wangs. – we just had to make sure we avoided any pit stops – 16:30 – the time of the last cable car was soon approaching!

So, there you go! Our version of the Pizol – 5 lakes hike. There’s a reason this hike’s popular and hopefully we’ve convinced you that it’s worth a visit! Happy hiking!

As we mentioned, if you want to see the first of the 5 lakes you need to make a short detour at the very start of the hike to the first lake, Wangersee, which is 5 minutes in the opposite direction from the start of the Pizol 5 Lakes trail.

Apart from that, there aren’t really many variations to this hike.  For a shorter taste of the hike, you can just visit the first two lakes, requiring about 300m up and 300m back down, and the area around the second lake is one of the most impressive on the hike so you’re still getting a good taste of the full hike.

Overall, the hike is well sign posted but in case of doubt look around or ask one of the many hikers you will find on this hike. And a final warning again: it really is worth getting an early start – by the time you’ve made your way to Wangs, bought cable car tickets and gone up the three gondolas/chair lifts, you can easily find that there isn’t that much spare time left to relax, enjoy the lakes en route and still make it for that final cable car down at 16:30.