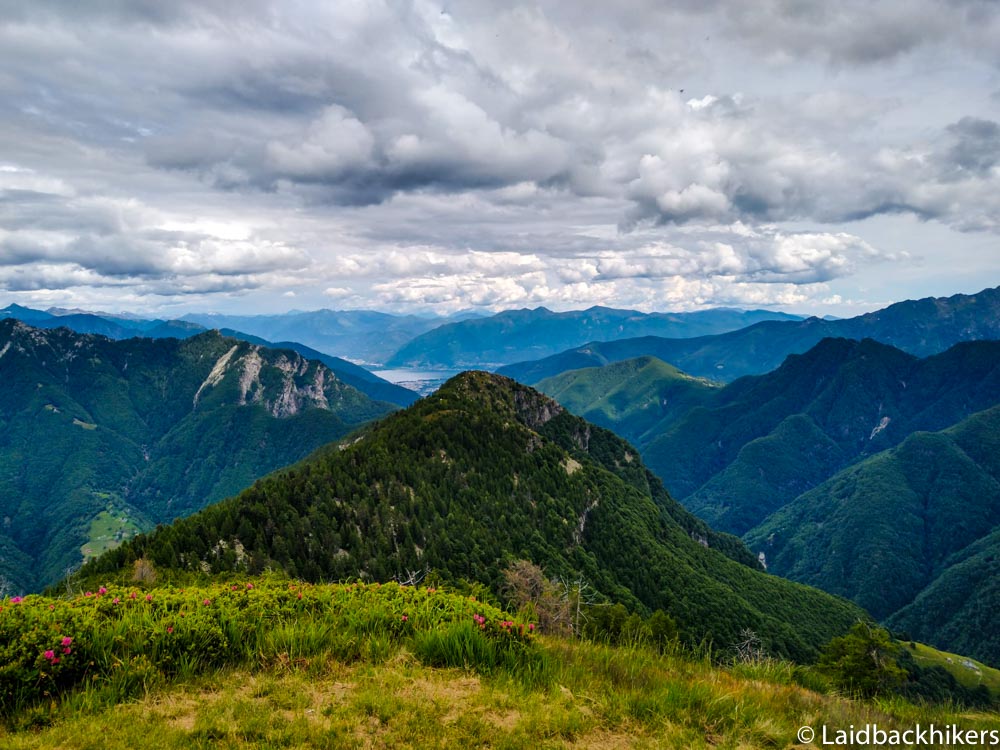 Today’s post centers around our hiking adventures up Pizzo Zucchero, or as I translate it ‘Mount Sugar’, in Ticino. In the spirit of minimizing travel during the pandemic (#staycation 🙂 we hired a car and took some of our annual leave in Switzerland. This was a great opportunity to visit places we’d never been to and of course to find some new hiking spots! And as a side note, we hired the car from Zurich airport and never have I seen that airport so devoid of people – spooky.

But back to our trip, which took us to one of my favorite places in Switzerland: Ticino. This time we stayed in the outskirts of Locarno in a converted studio of some very friendly locals. The weather was fair but changeable and so we knew that we’d have to pick our hike carefully.

From Locarno there are many valleys that you can drive up. Some like Centovalli and Verzasca are well known and others like Onsernone we’d never heard of until we looked at the map. Since the weather was threatening to hit us with thunderstorms we went for the valley with the lowest probability of one according to Swiss Meteo: Onsernone Valley.

It was really fun to have a car on this occasion because what a drive up this valley it was! The valley is really at the back end of nowhere and the road was not wide enough for two cars in most places. Fortunately, it wasn’t busy so we drove peacefully up the steeply sloping hillside in this very narrow valley. As we made our way up we wound our way through tiny villages with lots of old stone houses, very idyllic and perhaps reminiscent of a simpler past. One of these villages is called ‘Loco’ which entertainingly means crazy in Spanish.

The drive up from Locarno station is about 53 Google minutes but it probably took us 20 minutes more than that as driving the Google estimated speed on those roads is a challenge and we kinda just took our time absorbing all the scenery! Our destination was a little car parking spot just before the village of Spruga. The car park is on the side of the road and fits just 4 cars. The good thing is that the path started at this mini car park. If the car park had been full we would have parked up in Spruga and walked down to the start of this path.

The signs at the bottom of the hike didn’t mention ‘Pizzo Zucchero’, but instead signposted us to ‘Cap. Alpe di Salei’ which is a fork point for many peaks further up the mountain. The first part of this hike to Alpe di Salei is roughly 600 meters up through the woods without much sideways in between and is really the kind of hike I enjoy.

After about the first 200 meters up we came across an open section with a traditional stone village called ‘Ligünc’. Some of the buildings were used as cattle storage so didn’t smell great 😅 but it was a very photogenic village and with views of the valley we drove up. Pretty amazing that they put a road through there! Part of the village is scattered around on the slope so it’s about 100 more vertical meters before you enter the woods again. From there, the next 300 meters up were on a well-maintained path. 300 meters of altitude gain up through the woods may sound boring but this was one of those hikes where the wildlife kept us entertained 😅.

To start with, were the many anthills dotted along the hillside. Now this is an exaggeration but to the insectophobe in me it felt like this mountain had enough ants 🐜 to make up for the world’s population. Apart from ants, on our way up through the woods I caught a glimpse of a small brown fox further along the path. It appeared in my line of sight for a fraction of a second (no pictures) but probably sensed our presence and disappeared off so that we never saw it again – foxes tend to be shy.

Once we got to Alpe di Salei, which was a plateau up on the mountain, we found a restaurant and an overnight hut with a few people taking in the scenery. Because of the ever-looming possibility of a thunderstorm we didn’t stop. Pizzo Zucchero was finally signposted and we were eager to get to the top! To our surprise it was still 40 minutes away even though on the map it looked just 15 minutes away. Turns out you do need the time to go up the last 200 meters up the mountain. That was quite some cardio – although there were some locals that made it look like a breeze – they weren’t even panting and were going up pretty quickly. Amazing really.

Once we were at the top, the view was fantastic. We were looking into heavily forested valleys all around us, both Swiss and Italian parts of the Alps and of course Lake Locarno! There was also a large cairn at the top which we contributed to and then discovered that ensconced in the stones was a little lunch box with a ‘gipfelbuch’ or peak book that we could write in. Something that I always enjoy contributing to.

Having made it to the peak without any bad weather we decided not to push our luck by dilly-dallying. We made our way back down the peak to Alpe di Salei and from there back down to the col which signposted us to Spruga. There are several ways back down to Spruga from here, but we chose the one that went directly down into the village (see map route below).

The way back down was relatively uneventful save for the 10-15 minutes we spent gently trying to get past some very curious goats who’d taken to lying right across the hiking path. As we neared, some of them ignored us entirely and some got up and came up for a pet. There were baby goats around so we had to be patient and get pass slowly without scaring the mothers.

The way back down was a bit long for my liking, but we ended up in the tiny village of Spruga. As I write I remember being ‘greeted’ by a drunken old man who seemed to be shouting at everyone and everything that passed by – in Italian of course!

From Spruga, it was 10 minutes on the road back down to our car. We thought we’d had enough adventure for the day and so were looking forward to a peaceful drive back down. But no. We had a very entertaining and slightly hair-raising time when we met not one but two Post Buses on the way back down those narrow windy roads! One of them stopped and let us pass but the second one well that was entertaining.

We had to reverse and squeeze ourselves tightly up against a corner. The bus inched forward with literally centimeters to spare between our car and the bus. The bus driver got up, opened the door and said ‘Avanti, avanti’ which in English means ‘drive forward’. As we did so, he was able to successfully inch away past us. We thought hooray – that’s all the Post Buses out of the way for today. But fifteen minutes later, another post bus came tootling up the valley. This time he stopped and let us past without any hullaballoo and ‘Avanti’s. I could imagine that this road would be less fun to drive on a busy day with many cars and parts of the villages where the buses themselves can barely pass through.

What a fun day up a random little valley!

This is a fairly off-the-beaten-path hike in a random corner of Ticino so there’s just one route up to Pizzo Zucchero available with a few minor variations.

If the hike is too long for you, you could consider just heading up to the old stone village and from there looping back to the car park via Spruga.

If you have lots of energy on the other hand, instead of PIzzo Zucchero consider heading up towards ‘Pilone’ (also called ‘Cima Pian del Bozzo’) which is a 2192 meter peak on the Alpine Swiss-Italian border.

We know parking can be the devil at times. The place where we parked had just 4 car parking spots on the side of the road. In peak summer that might well be full. In that case, you’re best off parking either in Comologno (adds the best part of a km to your hike) or in Spruga (no change in hike distance).