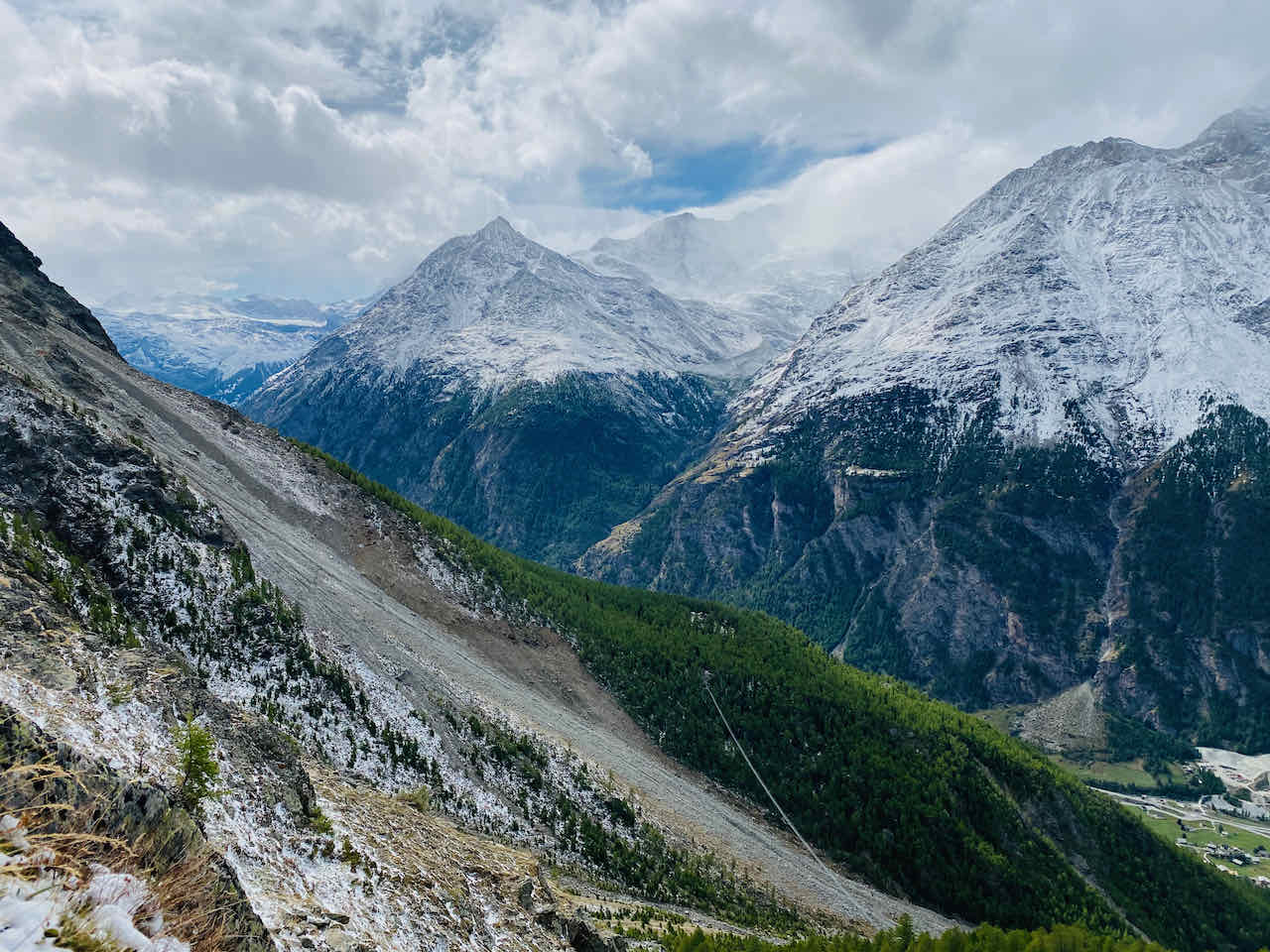 If you’ve been in Zermatt for a few days and have had your fill of the Matterhorn, then a hike across a huge Alpine suspension bridge might provide you with a different kind of excitement. We certainly enjoyed it.

The hike to this suspension bridge starts in Randa, just two train stops down from Zermatt. Randa is a tiny mountain village with Swiss style houses dotted around it and it’s definitely not got any of the hubbub of Zermatt.

The suspension bridge is officially known as the “Charles Kuonen Suspension Bridge” named after its main sponsor. You’ll find signposts to it starting at Randa train station itself. Look for the typical Swiss yellow hiking signs that pointing you in the direction of the hike. They call it the Europabridge or ‘ Hauspil – Hangebrucke’ interchangeably.

Before I continue though, here are some bridge fun facts to put the whole thing into perspective. The current bridge is 494 m long, which is about 1.5x the height of the Eiffel Tower. And at its highest point it’s about 85m above the valley – in other words you could almost fit the Statue of Liberty beneath it. It turns out that this new bridge is a larger replacement for a previous bridge which was put out of action by a rockfall just two months after opening. Bummer! This left keen hikers with a long detour for nearly 7 years until this new bridge was opened, though when they did start building, it took the Swiss just 10 weeks to build and install the new bridge. Allegedly, the bridge is built using some fancy vibration damping system that minimises the ‘swing’ of the bridge. Though, as I’m a bit of a wimp with these things, I most certainly did feel the bridge swing! My fellow hikers seem to love it though…

So yeah, it’s quite the bridge! But that’s enough numbers – let’s get back to our hike. From Randa station, the path takes you up through the cobblestone streets of Randa. Not too long after the path turns and heads on up through the forest. On a hot summer day, the forests will provide a good respite from the heat but in our case, it was cloudy, cold and there was a dusting of snow on the ground further up.

This is also the most demanding part of the hike. It takes about 1.5 hrs and 600m (~2000 feet) of altitude gain to get to the bridge depending on how fast you hike up or how much you get distracted. It’s not all in vain though. As you head up you’ll be surrounded by forests with views of the snow-capped peaks across the valley flashing in and out of view.

As you near the bridge you’ll get a few glimpses of it out of the forest. Since we were there towards the end of the season, there was no one else around to share the bridge with. So we spent some time admiring it, taking photos and buckling up to cross it. With a bit of wind around we had to zip in all the layers we had, it certainly wasn’t warm up there!

Time for the crossing! Now on a warm summer’s day I expect this to be a slightly thrilling but fun crossing. With the wind coming in just as we were about to cross it turned out to be a pretty chilly crossing for us! It took a good 10 minutes to get across and the only part of us left to the elements was our eyes – that wind was cold. Still, it was beautiful – the big mountains in front us, the chasm below and the snow dotted all around. And yes, the bridge does swing. It probably didn’t help that it was windy but, in the middle, we ended up holding both sides of the bridge to balance 🙂 . What an adventure!

Once you’ve crossed the bridge to the other side there are some picnic benches to sit around and take in the views or enjoy a snack as we did. Now you’ve got some choices to make here. First, you could head back to Randa from this side of the valley via Gere. Second, you could turn round and head straight back to Randa retracing your steps across the bridge. This makes for the easiest decent and isn’t very steep. And finally, the option we went with is to detour to the Europahütte before heading back to Randa.

The Europahütte is another 200 meters up from the bridge and offers a great vantage point from which to view some of this region’s 4000-meter mountains like Weisshorn and Zinalrothorn. It’s also a mountain hut where you can pick up some grub and a beer to sit back and enjoy the views during high season.

As a side note, from Europahütte the path forks off. In one direction hikers often continue on Route 27, the Europaweg from Zermatt, on the long way round to Saas-Fee. And in the other direction, you’ll find the more serious alpinists heading up towards mountain SAC hut ‘Domhütte’ which is presumably basecamp for the ascent up to Dom, an iconic 4480m peak. Neither of those routes, especially not the latter, were on our menu today though. Once we were done soaking up the views, we retraced our steps back to the bridge.

Instead of crossing the bridge and going back exactly the way we came up we decided to make a loop of the hike and head back to Randa via Gere. Quite similarly to the way up, this path took us down through the forest. I’d reckon it took us just over an hour to get from the bridge back in to Randa. From here, we hopped right back on to the train and made our way back to Zermatt! Now that wasn’t too long away from the Matterhorn was it?

A shorter loop – 6.5 km, ± 700 m ↑ 700 m ↓, 3h 10 min, T2 (medium)
A slightly shorter version of this hike still includes the bridge but skips the detour to the Europahütte. After you’ve crossed the bridge you’ll find signs pointing you towards Randa – just follow them and head back down into town.