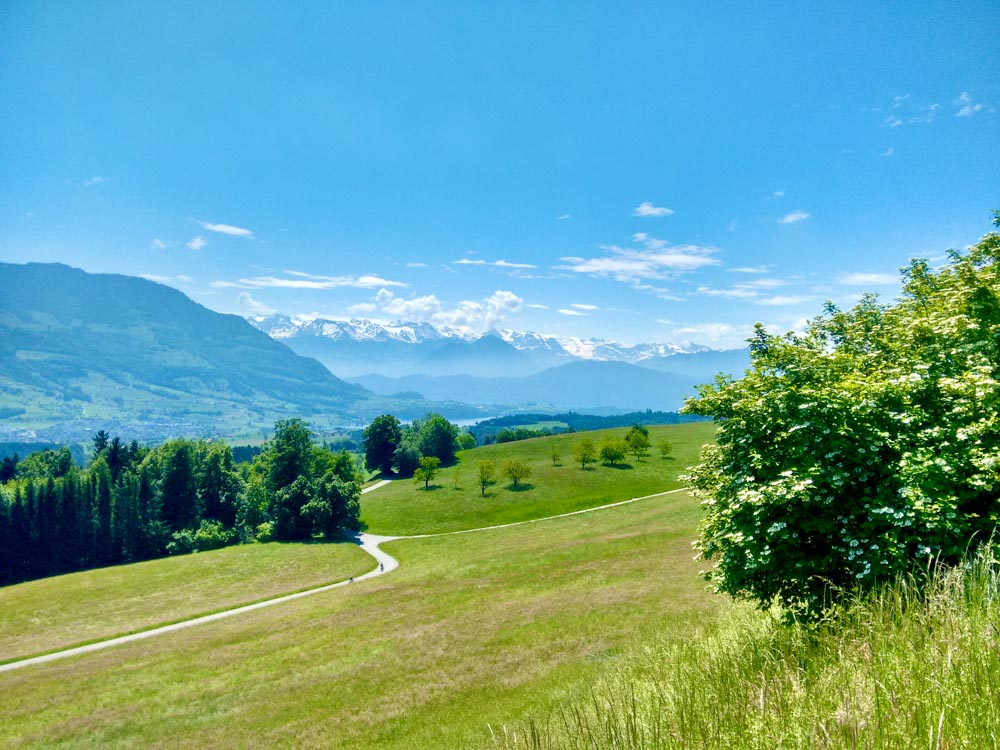 A few months ago, we described Rooterberg as Switzerland’s smallest mountain, and that got us looking at a list of the smallest mountains in Switzerland. We found that we’ve actually climbed all of the top 10 (or should that be bottom 10?) over the years, some of them more than once! As you can imagine, these are relatively small mountains, so most of the posts in this series will be short!

So, how about Rooterberg? Well, at first glance, Rooterberg doesn’t have too much to offer, since it’s just the highest point on a low ridge lying at the northern edge of the Alps. It’s also pretty flat by Swiss mountain standards – which probably explains why it’s sometimes called a boring mountain. What you do get here, though, is nice views across the surrounding countryside – Lake Zug and Rigi are nearby, along with the always-picturesque Lake Lucerne (Vierwaldstattersee).

For us, the mountain is actually at its best in winter, when there’s snow on the ground to add character to the peak, but the nice views will still be there all year. The location is good too – it’s within striking distance of both Zurich and Lucerne, so could be a nice option for a relatively easy afternoon walk – a laidback afternoon stroll if you will.

As with a lot of these smaller peaks, there are a whole bunch of ways to get to the summit. However (and strangely for a ‘prominent’ peak), there’s no formal path to the peak, so you’ll have to get off the path and head across the meadows if you want to get to the actual peak, which is next to a solitary tree. Judging from the footprints in the snow in the winter, the most popular options are from the east along the crest of the ridge between the trees, though people had come up in pretty much all directions (it’s not a particularly steep meadow!). We’ve put together a couple of route options below.

For a short walk up, start in Udligenswil (there are several bus stops and car parks). From there you can make Rooterberg into a nice loop hike. The last bit up to Rooterberg is off the path, so this is a bit trickier underfoot but it’s not particularly steep. The rest of the hike is easy.

For a more substantial hike, start in Root D4 and finish in Kussnacht am Rigi. We actually did this in the opposite direction, but starting at Root D4 means that you’ll have the best views in front of you as you head down into Kussnacht am Rigi.