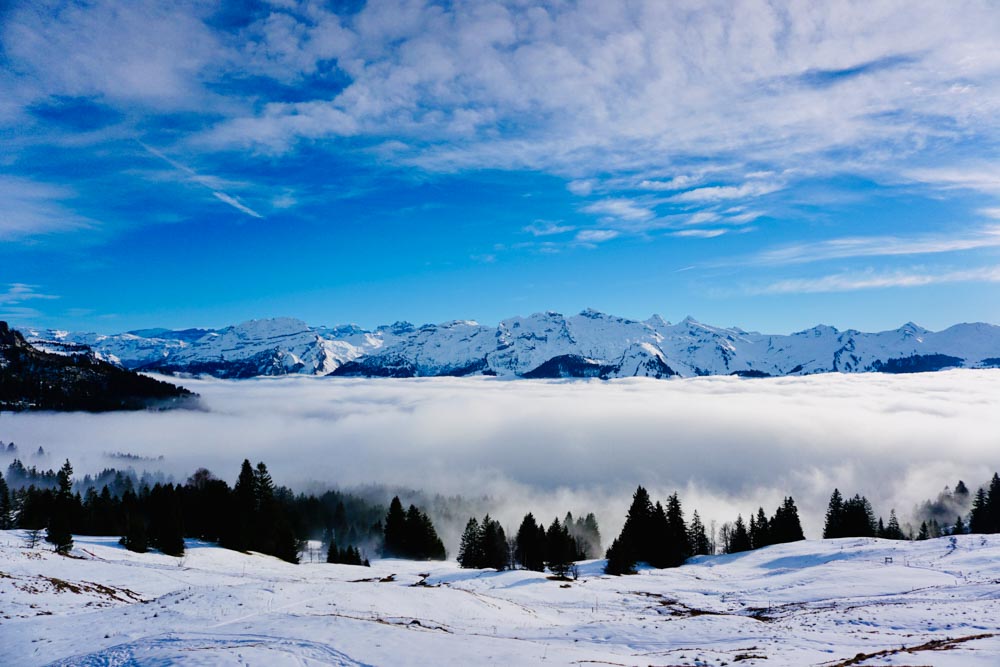 After a New Year’s night, or Silvester as the Swiss like to call it, we decided to head into the mountains for a short but relaxing hike. After a bit of searching, we found that Rotenflue (or Rotenfluh) in Schwyz fit the bill. It’s not too long, not too hard and most importantly was above that grey cloud line that often plagues us down in the Swiss cities…

So off we went, on a train to Schwyz, a bus to Rickenbach and a cable car up to the peak of Rotenflue. And no this is not Reichenbach or more precisely the Reichenbachfalls from Sherlock Holmes which my brain instantly thought it was – alas that’s somewhere close to Lauterbrunnen near Interlaken. Rickenbach is in canton Schwyz and is just a cable car station that gives you access to the nearby mountains.

As the photos will attest, it was quite a view from the top of Rotenflue! We were just above the clouds, out of the grey and into the blue. There are many winter walking paths in this region (see snapshot below), in fact more than we could find online. So, we chose one of the simplest paths that took us from Rotenflue to Stägleren, then Müsliegg (breakfast anyone?) and finally back to to Rotenflue.

As often with winter paths, it was very well-marked and the path was wide. Despite being New Year’s Day, it was pretty busy with skiers and walkers in all directions. The weather was certainly moody with the clouds huffing and puffing up and down the valley. I couldn’t complain though as we were out in the sun with panoramic views of snow-covered peaks on one side and a view of Grosser Mythen, an iconic Swiss peak, on the other side.

For those of you that are keen on the Grand Tour of Switzerland, Rotenflue is on that route and you’ll find the iconic red Grand Tour picture frame about a minute away from the cable car. It’s quite a nice once with Gross Mythen in the frame.

After enjoying all that lazy walking, we retraced our steps and headed back home to spend the rest of our day off relaxing. Happy New Years Folks!

By Car
See parking instructions above.

As the map photo above shows, there are many ways to make this hike longer or shorter if you wish and we provide just two examples below. We haven’t found complete information online for the options here, but some of them are shown on this map here.

At Vorder Oberberg, a set of 2 cable cars starting with Oberberg St. Karl cable car will take you down to Ried (Muotathal Seilbahn) where you can catch a twice-hourly bus back to Schwyz.