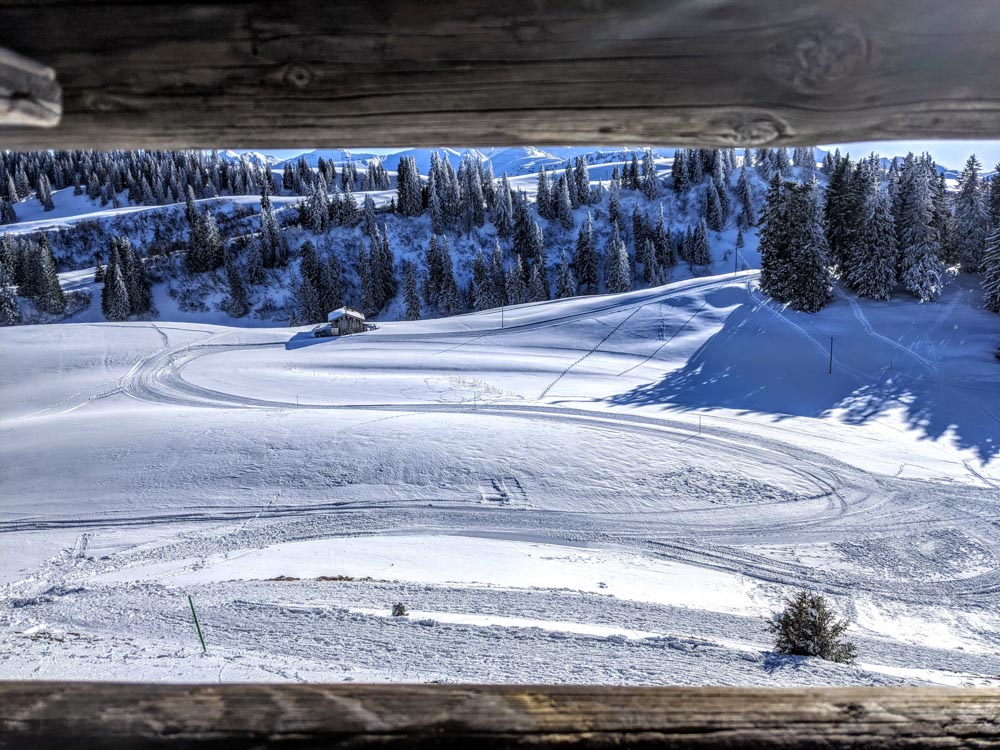 We headed east out of Zurich past the Walensee and to Landquart. From there it was a short hop on a local train to Grüsch train station from where we made our way over to the local cable car station, Grüsch Danusa, which was about 15 mins away by foot.

It was a quiet weekday and there wasn’t really any rush or lines – we just headed straight onto the gondola. Once on the gondola we headed all the way up to Schwänzelegg, so straight past the middle station of Cavadura. From Schwänzelegg, the walking signs took us down to the winter walking path which presented us with two hiking options – one short and one long. Both were fairly easy and followed the flat contours of the mountain but since the long one was just 4 km we decided to take on that one!

It was unbelievably sunny and I seemed to have forgotten my sunglasses! Did I regret that packing oversight! Gaiters would have been handy too – they’re probably recommended on most winter hikes to be honest – as we kept veering off the path to take pictures of the snow-covered trees, views and snow sculptures we found along the path. As a result, I kept collecting snow in my boots, getting my feet cold and the top of my socks wet. My partner laidback hiker tends to do the packing when we go hiking but this time I did it so I will consider this a lesson learned for next time… One thing we couldn’t get enough of though was the view. We had a 360-degree view of the Alps and to top the scene off the moon was out adding to the beauty of the cloudless sky.

The hiking track itself was simple as you essentially followed the wide tracks laden with snowy footsteps of your fellow hikers. Wooden poles with the tops painted in pink were dotted along the path making sure you stay on it. Do pay some attention though, even if only with the Swiss Wanderland map app, this wasn’t one of Switzerland’s best sign-posted walks.

As our loop was coming to an end, we noticed lots of small snow sculptures of animals and random items dotted along the path. The picture of the squirrel below is testament to that impressive snow creativity!  Apparently one of the activities for school groups visiting the ski area is building igloos and snow sculptures, so perhaps that’s where they came from 🙂

Once we were done, we treated ourselves to something warm at the local ski restaurant. Considering it was a weekday, I guess it shouldn’t be surprising that the demographics of the people around were mostly retirees or young kids learning to ski with their parents. There was just one other young couple who looked like they were enjoying the day in a similar fashion to us.

Sitting outside in the sun, we enjoyed the view of the mountains and the sounds of kids climbing up little mounds of snow and then going ‘weeeeeeee’ down them! To be honest, I was secretly envious of them having so much fun rolling around in the snow like that. I wanted to do that too 😀

But instead, we sipped away at our coffees and gazed into the sky. What a wonderful way to spend the day! Once done, we headed back home retracing the steps that brought us to this beautiful corner of canton Graubunden!

See here for a map of the route we took – winter hiking route 329.

As mentioned above there is a way to shorten the hike to 30-45 mins if you walk across a pinch point where the tracks of the loop come relatively close together. Other than that this must be one of the easiest winter hiking paths out there. So gear up and when you can grab the chance to enjoy some gorgeous winter walking in Switzerland!

For the cable car and ski area, there’s more information here (German only).

When coming from Zurich, you’ll be changing in Landquart, where the train station to aim for is Grüsch. From Grüsch, it’s a 15 min walk to the bottom of the Grüsch-Danusa cable car (Bergbahn) where you hop on a gondola up to Schwänzelegg (Cavadura) cable car station. Note that the SBB travel app/website does not recognize this cable car station so you’re better off getting times and directions to Grüsch and then following our description above.

There’s a car park at the bottom of the cable car – for more details, see the table above.