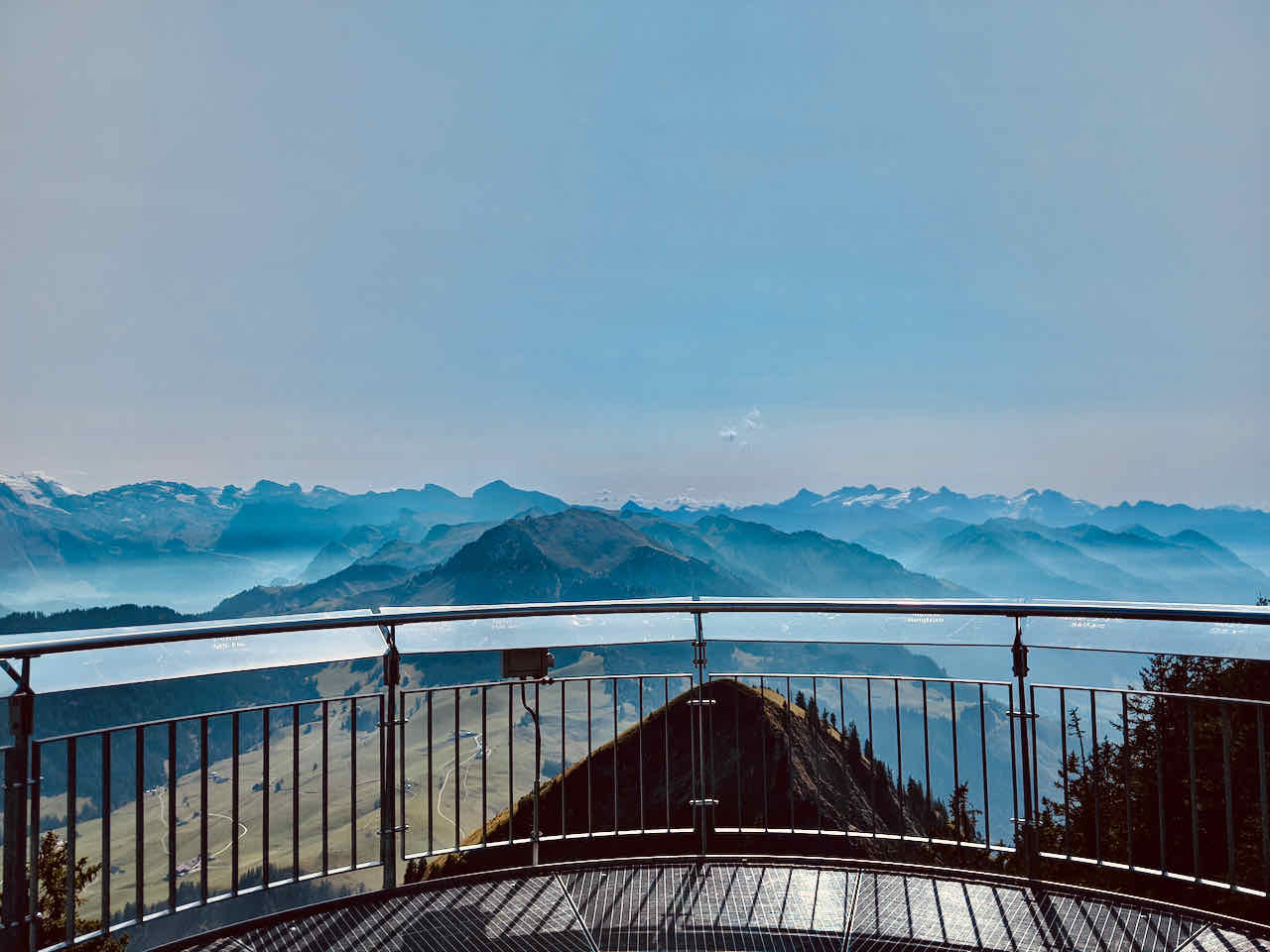 On one of the last warm weekends in September we decided to head up Stanserhorn. Its panoramic views of the Vierwaldstättersee lake (Lake Lucerne) and the 3000m high mountains around Engelberg make it a popular choice amongst hikers and visitors.

We started off in Stans, capital of one of the smaller Swiss cantons: Nidwalden. Stans itself is a picturesque town with a highlight being a large monument to Mr. Winkelried, a mythical figure who, from my brief translation of German Wikipedia, seemed to have heroically sacrificed himself in battle against the Habsburgs.

From Stans there are several paths up, including one signposted as 4h 15 mins and one as 5 horrs. Both are doable and our choice boiled down to preference. The first option is shorter and involves what looks like a 300m up stretch with about 20 hairpins across an open sunny meadow – great for the views but not so good in the hot sun! The 5-hour option was nearly all in the shade of the trees and was a bit flatter because it’s a bit longer – you still have to go up over 1400 meters on both paths. Given the heat we opted to for the shadier 5-hour version, which also turned out to be a fairly quiet route.

The path initially took us through the rest of Stans and straight up through the surrounding meadows. Even just from outside the village we started to get good views of the mountains around the Vierwaldstättersee and further afield, including Pilatus, Gross Mythen and Rigi. From there, like seemingly everywhere on this mountain, the path continued steadily up for 90 minutes until we reached Kalcherli at 1200m where the path opened up onto a meadow with grazing cows and a little mountain hut that offers drinks if you wish. The views were already lovely – Stans at the bottom, the lake in the distance and the Rigi massif peeking out on the side. Perfect spot for a lunch break.

The next pitstop from here was ‘Ahornhütte’ at 1445m where there’s a small viewing platform with benches. We also found two signs with different times up to Stanserhorn from here: 1hr 40 and 1h 25 min. This time we went for the shorter route – it was marginally steeper but still shaded!

From Ahornhütte, it’s about 200 meters further up through the forest until you get to the Stanserhorn ridge. Unlike some ridges this ridge is not very steep and is a relatively easy ridge walk up to the peak.

Once we made it to the top, we immediately noticed how popular it was! Lots of people seemed to have taken the cable car up from Stans. We all funneled into the Stanserhorn restaurant area and headed for the final 50 meters up of leg burn to the real peak. I should note that before heading up there’s a big sign saying you should reserve your tickets for the cable car down – so we did just that (read more at the bottom about the 2.5 hr long queue and how we avoided it).

A chronological overview of the signs and conditions of path we encountered on our way up!

On this last bit up to the peak we found a little marmot enclosure, sadly with no marmots to be seen this time… Next to this, on the slopes of Stanserhorn we and a crowd of other spectators gathered around to see paragliders taking of the slopes including a rather impressive lift off by a guy jumping off with a microlite. They must have felt some pressure with about 100 people looking at them!

After that welcome excuse to rest our legs we made it to the peak! From here the view was incredible – mountain after mountain after mountain. You could see the Titlis massif with all its glaciers too. Back at the restaurant there’s a large viewing platform with signs that tells you which mountains you can see.

The restaurant at Stanserhorn is apparently a ‘revolving’ restaurant – there seem to be a couple of these dotted around Switzerland. More unusually, the way back down to Stans involves (allegedly) the world’s first Cabrio cablecar – yes it had an open top! This was really cool and as you’d expect most of us piled into the cable car and headed to the top roof-free compartment. It was well guarded with rails, so it was an exciting but gentle ride back down to Kälti. From there you could switch on to a little funicular (we didn’t – see why below) which takes you to Stans train station for the final journey back home!

This is not exactly a small hike up for most of us. It’s 1500 meters up, which, if you’re not accustomed to it, can make the last few hundreds of meters up feel like self-inflicted torture. So, if you haven’t done hikes this large recently, we recommend trying out a couple of other hikes that are more like 1000-1200 meters or so up or opt for one of the shorter routes below. Burgenstock, which is a smaller peak nearby, could also be a good alternative option.

This version removes 300 meters of altitude as you take the Stanserhorn train to Kälti (also spelled Chälti) where instead of getting on the cable car you start your hike up towards the peak. From Kälti, you still have the option of the shorter steeper route up the meadows or a less steep route such as the one shown on the map above.

Head up with the Stanserhorn train to Kälti as in option one, and this time hop on the cable car from Kälti to the midway stop: Bluematt. Note that this is a ‘Stop on Request’. This means that you have to inform the conductor that you want to get off here when you enter the cable car.

Starting at Bluematt takes another 500m of altitude off the climb. Once again, you still have the option of the shorter steeper route up the meadows or a less steep one – plenty of options on this mountain!

If you just want to enjoy the view from the top with a brief 30-minute walk then go all the way up the Stanserhorn cable car. From there follow the signs to the peak.

Long queues for the cable car

The way down uses a cable car to Kälti followed by a funicular railway to Stans. When we initially arrived to the restaurant area we were told that there was a 2.5-hour waiting time to go down. They’ll give you a ticket with a time slot though – no need to stand in a 2.5-hour queue. That’s enough time to go to the peak, get a drink, a meal and have some relax time up there if you wish. We didn’t want to wait so long and discovered that the reason there’s such a queue is that although the cable car can take everyone down to Kälti, the train, the ‘Stanserhornbahn’, is the bottle neck with a lower capacity.

The Stanserhorn train isn’t actually very long, so once you do get to Kälti it’s only 200 meters downhill and a 40-minute walk to Stans train station. Once we agreed to do that, we were allowed to skip the 2.5-hour wait, take the Cabrio cable car down immediately and walk the last bit.

Whatever you choose to do, we’d advise assessing the queue and ticket situation as soon as you get to the restaurant area which is before the peak.

Trüebsee – A mini-post on winter hiking at Engelberg