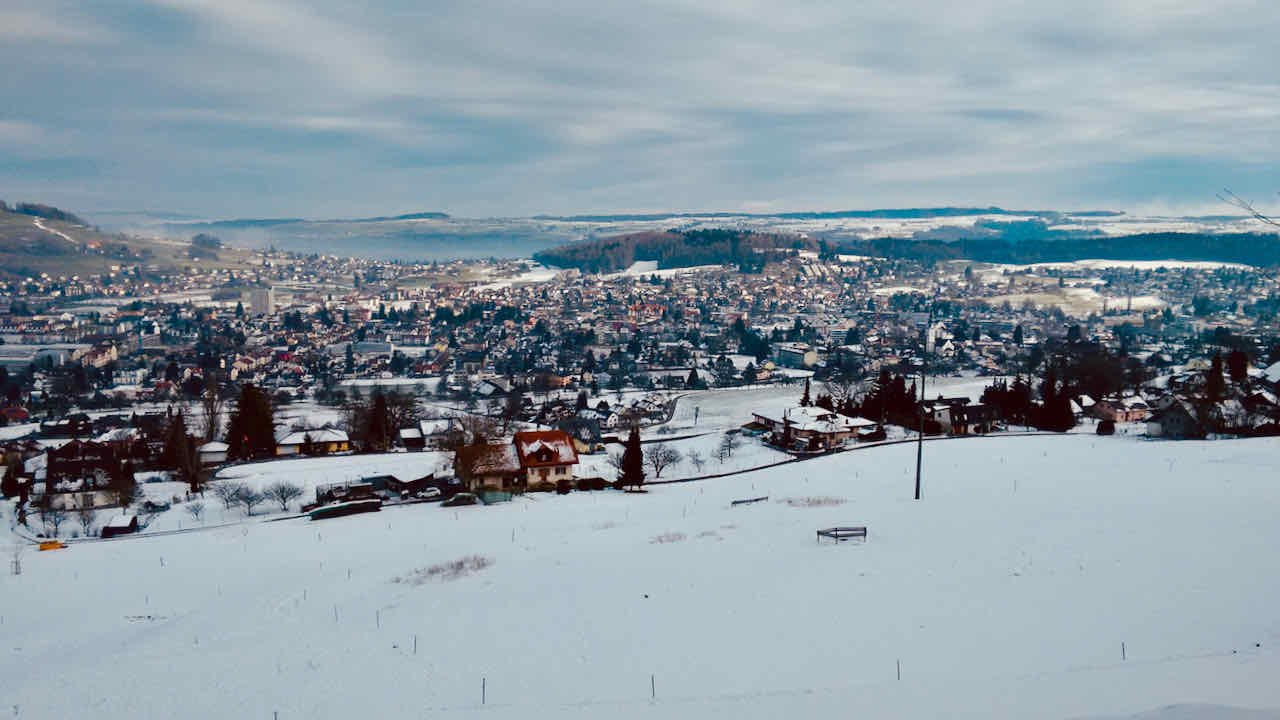 Nestled deep in rural Aargau, Stierenberg is a wooded peak well away from both the Alps and the Jura. We headed up Stierenberg on a cloudy day in the middle of the winter, with snow on the ground for the whole walk.

Even in mediocre weather conditions, though, we did get views of the Alps stretching along the horizon. Stierenberg has one claim to fame as well – it’s the most prominent point in Aargau and the only one with above 300m prominence. The monument on the summit also proclaims that it’s the highest peak in Aargau. It’s not quite the highest point in Aargau though – that honor goes to the slightly higher but less prominent Geissfluegrat, which is on the slopes of Geissflue in the eastern Jura – the peak there is actually split between Solothurn and Basel-Landschaft…

Anyway, we mostly had an uncomplicated hike up, threading in and out of the trees, until we got to the top and couldn’t quite find the summit! As with lots of these wooded hills, Stierenberg is criss-crossed with logging tracks, but on the official Swiss map, neither the walking paths nor the logging tracks are shown as reaching the real summit. Since the summit is flat, that didn’t deter us and we headed off into the trees hunting for the highest point. We actually spent quite a while meandering around in the snow between the trees before stumbling upon the monument marking the summit – at which point we found out, of course, that there actually was a nice easy path – no need for offroading! It turns out that there are two paths leading from the track passing just to the NE of the summit. These two paths are actually shown on openstreetmap.org but not on the Swiss Mobility App.

There seems to be a very small car park near Vorder Stierenberg, which would enable this short walk up to the summit and back down. A word of warning though – we’re not certain if this is a public car park, so you might end up having to park a bit further down!

If you’re coming by public transport there isn’t really a ‘quick’ way to the summit here, though you can still keep the altitude gain relatively small by starting in Rickenbach LU, which is just to the south of Vorder Stierenberg.

There are a lot of options for climbing Stierenberg – as mentioned, the hill is dotted with tracks on all sides. However, the villages of Reinach and Menziken seemed like the most logical starting points to head up to the peak for us, and while you’re often in the trees we also found open patches with nice views.