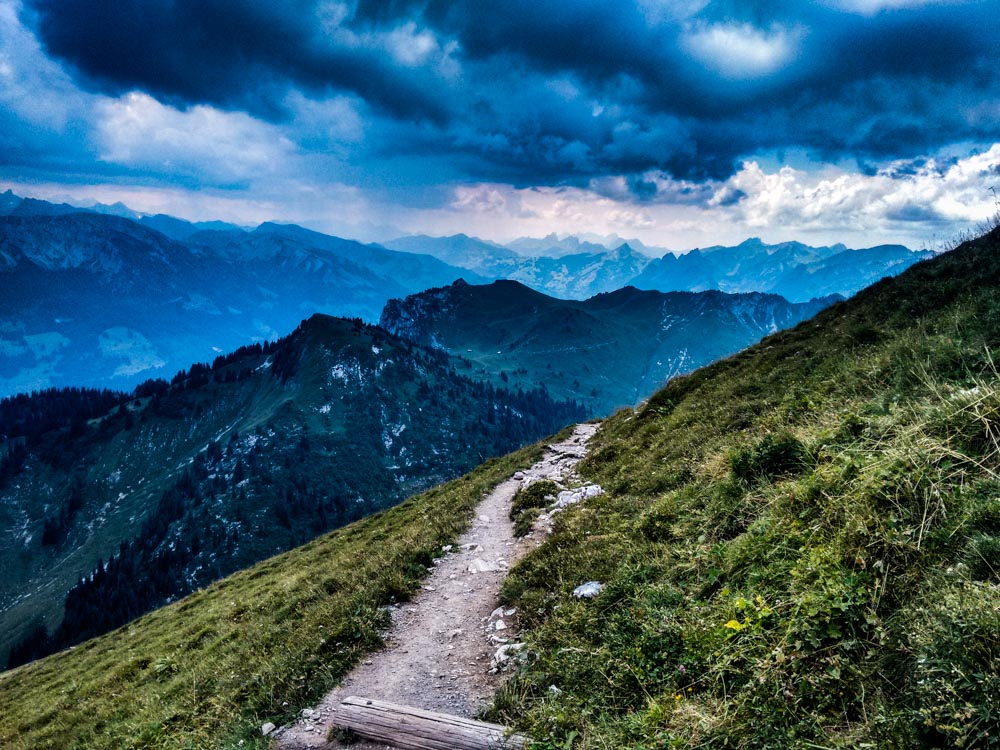 When my fellow laidbackhiker pointed out the peak we were going to climb, my eyes rolled over backwards and I probably said something like – “You’re kidding me! How do you expect to get up that thing?” Stockhorn is a knobbly looking mountain which from the train looked like a very difficult climb and just one week after minor surgery I wasn’t looking for a challenging hike….

But I was inevitably proven wrong. Stockhorn was an easy alpine hike and a very traditional activity for the Swiss national holiday on the 1st of August. The paths were well marked mountain paths and for a short hike it proved to be eventful! You’ll see why as you read along.

Click here or scroll down for our route details and other laidback options for this hike.

Stockhorn is in canton Bern, not far from Interlaken and a great option for those looking to spread out from the tourist hotspots around Interlaken. The Stockhornbahn cable car station is a 10-minute walk from the train station Erlenbach im Simmental. There’s more than just hiking available in the area too – I came across all sorts of adventurous activities like bungy jumping over a lake, paragliding and cave exploration that you can do at Stockhorn. You can even hire a ‘scooter’ or ‘trotti’ for a rather adventurous way back down the mountain. It looks like somewhere worth a second visit!

It was a hot and sunny summer day when we started the hike from Chrindi, the top of the first cable car. The first part of our hike looped us around a little alpine lake called ‘Hinderstockesee’ with an alluring deep blue color and a picturesque island in the middle.

From the lake it was upwards and onwards, a steady two hours of leg burning activity or in other words the sweaty part of our hike. To be honest, this is the favourite thing about hiking for me, a steady upwards climb that with amazing views at the top to reward your hard work! And then you can relax and take the cable car back down :D. I’m not the biggest fan of down-hill hiking.

As we were halfway through our hike we noticed clouds billowing above the mountains around us. In the summer this is often a forewarning for thunderstorms and we can’t stress how important it is to take thunderstorms in the Alps seriously. You don’t want to be stuck, exposed on the top of a mountain in a lightning powered thunderstorm. It’s a great recipe for fried humans. So, we had a look at the rain radar and based on experience surmised that we didn’t need to turn around. We had just enough time to get to the cable car station at the peak and wait out the storm in the restaurant up there. No spare time for dilly-dallying on this hike.

As we continued our hike upwards the sky progressively started to darken, the wind was slowly picking up and you could see turmoil building up in the skies – a thunderstorm was imminent. Despite the approaching weather, the views were jaw-dropping and the stormy clouds only added to the atmosphere.

We got to the restaurant and cable car station, which is just under the peak, in good time and decided to make a final dash up to the peak before the thunderstorm hit. Now we’ve already been up this peak from a different direction as part of another hike and so some of the pictures below are from that hike when it was sunnier. The views on both days are different but no less spectacular!

This time, our time on the peak was brief before we scurried back down to safety as the first rain drops started to fall and the sky started to grumble. As we stood in front of the restaurant enjoying the breeze, hail started to fall! A nice way to cool down in the heat of the summer.

Whilst thunderstorms are common in the summer, we hadn’t expected this one to last for several hours. For safety, the Stockhorn cable car was stopped and about 200 odd hikers including us spent the next few hours taking refuge in the restaurant. With some coffee and fries we sat with them and enjoyed the lightning show from inside this panorama restaurant. You can imagine why this is a hike we won’t be forgetting and one of the reasons why, despite it being 35 degrees in the valley, our hiking rucksacks always have raincoats, an extra jumper and waterproof trousers. We definitely needed it.

I should mention that there is a panoramic viewing platform that can be accessed via a rock tunnel from the restaurant. The platform essentially sticks out of the vertical bit of the rock which is the daunting face of the mountain that I saw from the train earlier that day. On some days you might get a view of chamois trying to scale the cliff too! I guess on the day we were there the thunderstorm had probably sent them all into hiding.

Once the worst of the thunderstorms and the wind had subsided the cable car was up and running again and we were able to finally start an uneventful journey back down the cable car and home!

If you had loads of energy and wanted a hike that would certainly tire you out you could consider hiking up all the way from the train station Erlenbach im Simmental to the Stockhorn peak. It’s about 1600 meters up, 8.5 km in total and about 5 hours of hiking. It’s nearly all on mountain paths so we’d advise people not to do this as their first hike….

If you’re coming by car you can use the carpark at the cable car station in Erlenbach in Simmental.

The cable car isn’t one of the cheapest here in Switzerland. For a full return ticket up to Stockhorn and back it costs 58 CHF for adults or 29 CHF for adults with a Swiss half-card or GA. For kids under 16 the ride is free. Full details on prices and operation times can be found here: https://stockhorn.ch/stockhorn-cableway/cableway/cableway-prices