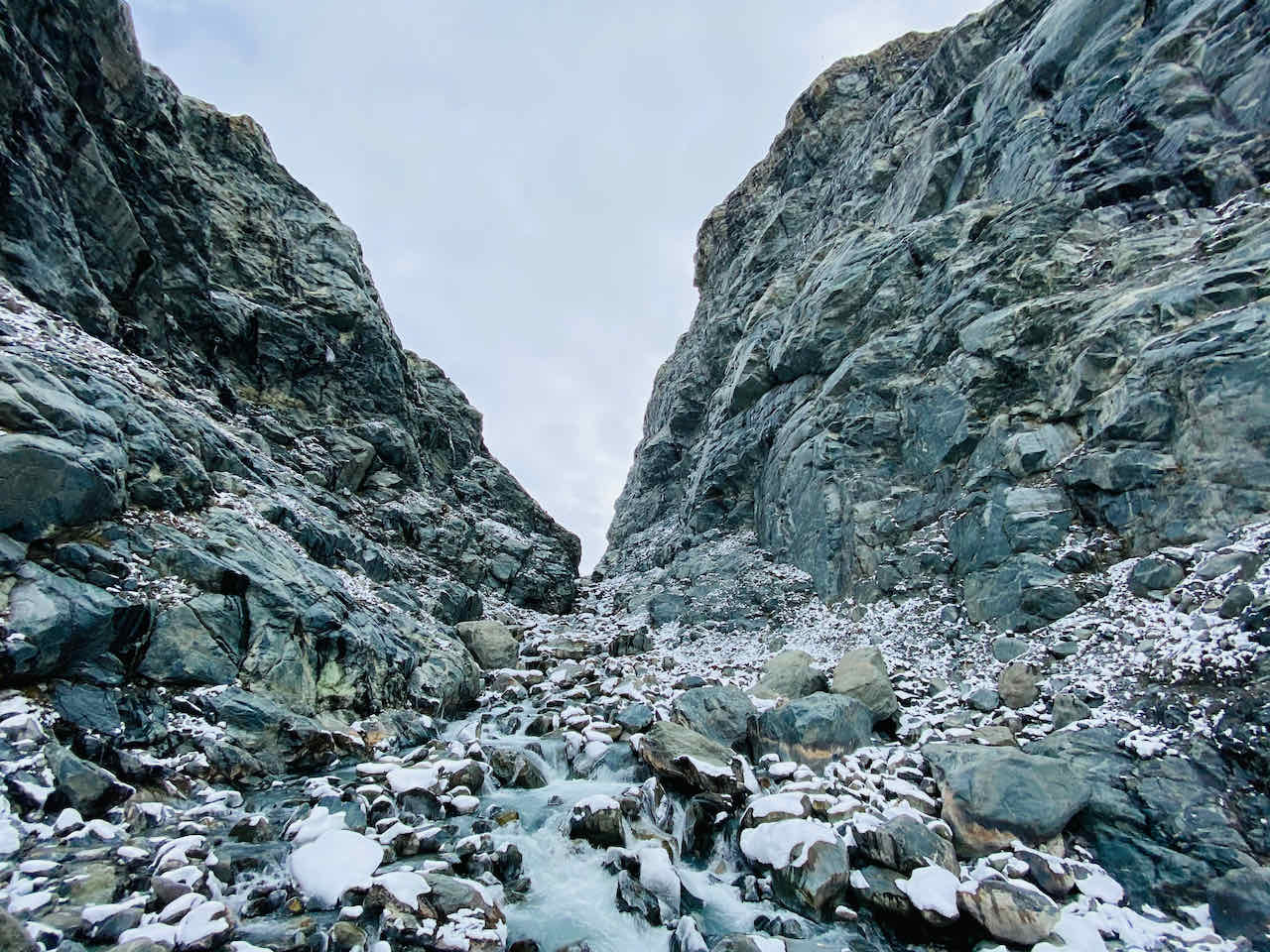 For those of you who’ve spent some time in Zermatt and are looking for alternative hikes in the area then this hike might be one for you! It takes you up through the recently deglaciated Gornera valley floor where you can witness the Gornera river starting to carve out the valley.  On the now glacier-free hillside you’ll also find a pine forest that’s just starting to take hold. The overall landscape is fairly wild – at least for this crowded corner of Switzerland.

The hike starts at Zermatt train station and follows those ever-present yellow hiking signs towards Riffelalp. This first stretch involves a nice stroll through the heart of Zermatt and the neighborhoods of Steinmatt and Winkelmatten. When we were there, the weather was pretty decent so we enjoyed many views of the Matterhorn whilst crossing town.

At the end of Winkelmatten we went left, heading up the forested hillside. In no time, you’ll find yourself standing high up on a train bridge that you might have spotted the town. Below you is the Findelbach stream that cuts through a scenic gorge. The trains on this route are headed up to Gornergrat, which at 3090m is the second highest railway station in Europe! At the end of the bridge, the path and train tracks deviate as the path, a wide track, carries on towards Furi and Schweigmatten.

Then a little further on, we came across an outdoor playground with a rope slide which was tempting various hikers, including us, off the path to have a go! There was also the Furi suspension bridge nearby over the Gorner gorge, but we managed to miss that on the way past… We carried on up anyway, and as we moved away from Furi towards Dossen and the Gletschergarten, the number of people around us started to dwindle. The landscape got wilder and the path started skirting around a cliff. From here on, we were headed straight along the Gornera valley floor.

This valley was deglaciated not too long ago. As a result, the landscape is relatively untouched and life is just starting to take hold in places. In fact, you’ll find lots of large boulders along the path that the glacier would have brought down and left behind as it retreated. We managed to turn one of them into a great lunch spot. Although there were no Matterhorn views for lunch the picture below is proof of the impressive landscape we got to admire.

As you continue along the valley you’ll come to a fork point. The path either heads up towards Riffelalp or briefly continues up the valley before reaching a dead end. We were quite enthusiastic about the area, so we followed the tracks as far up the valley as we could. By this point the Gornera stream had turned into a sizeable river that was gushing down through a narrow gap in the cliffs and there was no way for us to get any further. A pity since, just beyond those rocks we would be able to see the retreated ‘Gornergletscher’, which is stretched out beneath Gornergrat (see here for a Gornergrat hike option).

By this point though we’d thoroughly enjoyed our detour, and we headed back to the fork and up towards Riffelalp. If you had lots of energy you could continue another 300 meters up to Riffelberg station. However, we’d been out for a while so we opted for the mostly downhill 2 km stretch to Riffelalp station. We did this hike in a cold snap in early autumn (September), and as you can seen from of the pictures, there was already a fair amount of snow and ice in places, and this portion of the path actually had lots of icicles, including a couple hanging high over the path that we skirted round. Nothing too eventful, though, and we reached Riffelalp station with just enough time to buy our tickets and board the cog railway back into town, thus concluding another adventurous hike in Zermatt!

One shorter alternative route to the one we described above is to skip the first bit of the hike. You can do this by taking the cable car from Zermatt Matterhorn Talstation and getting off at the first stop: Furi. From here follow the yellow hiking signs towards the Gletschergarten and make your way up into this beautiful valley!

The Glacier Paradise Trail plus a bit extra at Zermatt