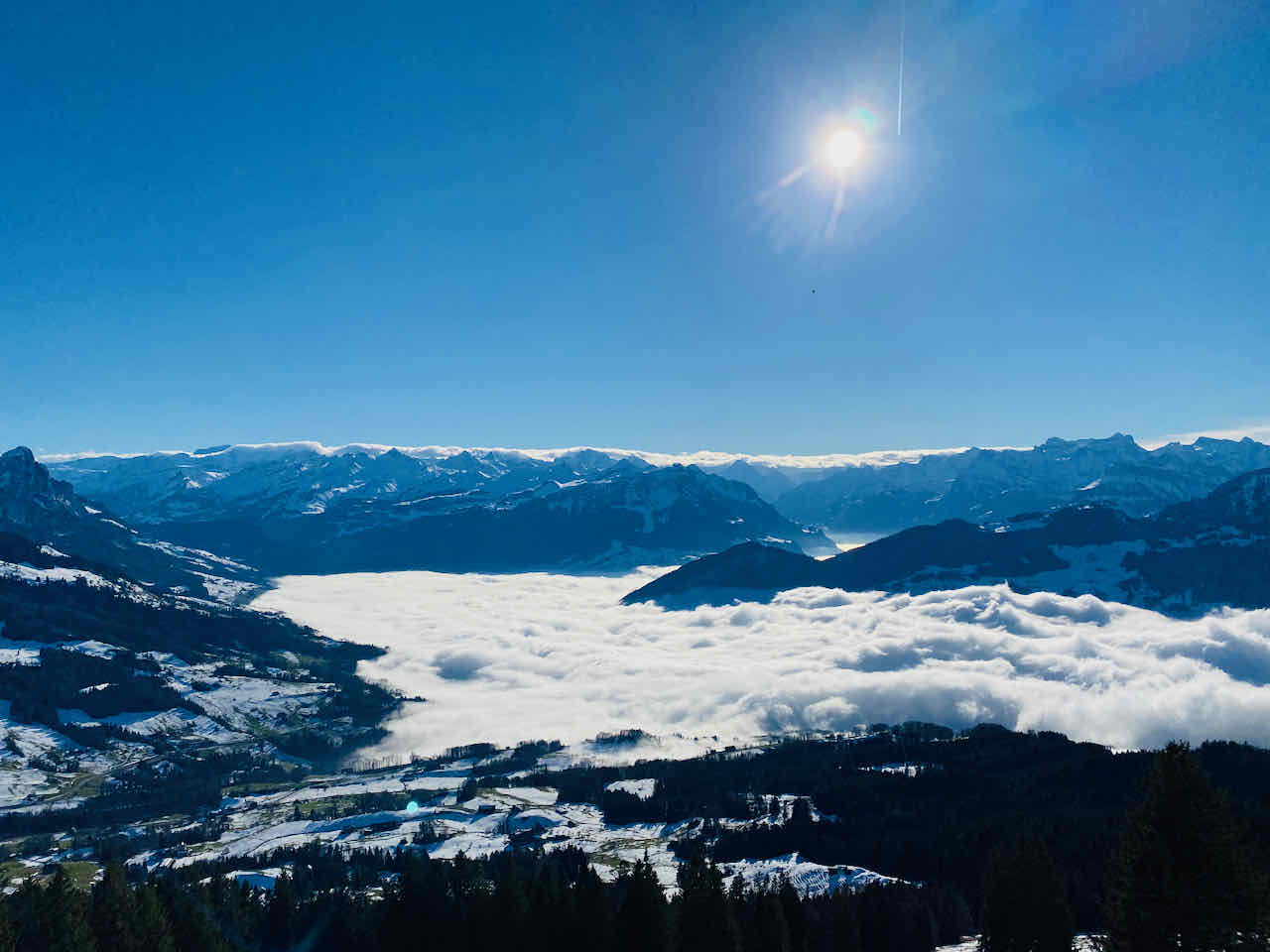 On a foggy Sunday, as the train started climbing up from Arth-Goldau station towards Sattel, the density of the fog began to fade. The sky got bluer and then suddenly bang! We were out of the clouds and into the sunshine. If you’ve never experienced this before it might be hard to imagine. But if you can, trust us, it’s such a thrilling feeling to know that you’ve escaped the greyness down below and can now feel the sun on your skin.

Autumn can be gorgeous with all the colors of the leaves changing. But despite that, it has a dark side. And that’s the amount of fog that can hang above the valley floor for days on end. Living in a mountainous country though we’ve got quite the opportunity to escape this killjoy weather. That’s because on many of these autumnal foggy days the cloud line isn’t very high and you can find yourself hiking above the clouds. It’s usually warmer above the cloudline and the views are breathtaking as you look down onto a literal sea of clouds.

Wildspitz is a peak that is often, though not always, above that cloudline. It can be summited from several directions and because there’s no cable car at the top it is not a very busy hiking route. Our hike up Wildspitz started from the town of Sattel-Aegeri at 770m (for those of you interested in something a bit longer you’ll find a description of a slightly larger route starting from Arth-Goldau later in the post).

But back to our hike. We hopped off the train at Sattel Aegeri station and according to the hiking signs Wildspitz was just under 3 hours away. The path up was mostly gentle. It was a mix of fields with cows, forest paths and large meadows. Very Swiss in some ways, and at a decent pace the bulk of those 600 meters up to the fat ridge line melts away without too much effort. If you’re lucky you might even meet some friendly cows on the way up.

As we did the hike in mid-December there was a fair amount of snow on the ground but the path was well trodden. So, it wasn’t as tiring through the snow as it sometimes is when you’re the first person making footprints through it! Once we got to the ridgeline at Halsegg the view opened up and you could see mountains in all directions. The clouds were below you and the peaks around covered in snow. To say it was beautiful would be an understatement.

It was another 250m up to the peak and windy. So to avoid freezing we hurried along. The top of Wildspitz borders the cantons of Zug and Schwyz and so this being orderly Switzerland there was a little cantonal stone marker to tell you just so. We spent a bit of time at the top admiring the view and watching the clouds below dance around in the wind. There’s a restaurant near the top but as it was closed we didn’t hang around the peak for too long. It was chilly up there!

From the peak, depending on where you want to go down to there are a fair few options. For a loop walk you could follow the path back via the Obhegkapelle to Sattel. To get to Zug, you could walk to the top of the Zugerberg funicular station. Or you can head to Arth-Goldau train station. The path to Arth-Goldau takes you via another peak called Gnipen. From Gnipen, the first option is to take the first left after the peak (the yellow route on the map below), which takes you down a fairly steep path – this one might be tricky in deep snow though! This path has a rather tumultuous history as it winds its way down the remains of a massive landslide known as the ‘Goldauer Bergsturz’. After heavy rains in September 1806, part of this mountain side gave way, leading to one of Switzerland’s largest natural disasters in recorded history. The rockfall killed 457 people and destroyed Goldau and a few of its neighboring villages by burying them under meters of rock.

If you don’t fancy this trickier route through the old rockfall, there’s an easier option (medium/T2) if you just carry straight on (the red route on the map below) which follows Route 64 down a gentler ridge to the bottom. Either way, the route down involves 1000 meters of altitude difference so get ready for some tired knees by the end of it! By the end of it all we were glad to be down and perhaps even more happy to get into the warmth of an SBB train back to civilisation :D.

Here’s a snapshot of the route.

This route starts and ends at Arth-Goldau train station. We would recommend doing the loop anti-clockwise. This way the steepest bits (the yellow path on the map above) are on the way up and not down.

If coming by car you could turn this into a loop hike. To get back to Sattel Aegeri where we started the hike you have two options.

Option 1 is to trace your steps back along the path same you took the peak (i.e. the red path on the map above). For variety we suggest option 2 which follows the path back to Sattel Aegeri via the Obhegkapelle (aka Obheg Chapel) – option 2 is the blue route on the map above.

Parking: If you’re doing this loop hike from Sattel-Aegeri there is parking at the Sattel Aegeri train station or at the massive cable car station a few 100 meters away: Sattel (Talstat. Hochstuckli).
Address: Eumatt, 6417 Sattel

I’m not sure how many of you would consider this route but I’ll throw it in the mix anyway – it’s the green path on the map above. You can walk from the top of Wildspitz to the funicular on top of the Zugerberg. The funicular whisks you down into Zug and a connecting bus will take you straight to the train station. If you live in Zug this might also be a nice hike to consider. This is a one-way hike.

Zugerberg – An Old Town, A Gorgeous Lake & An Easy Hike near Zurich and Lucerne