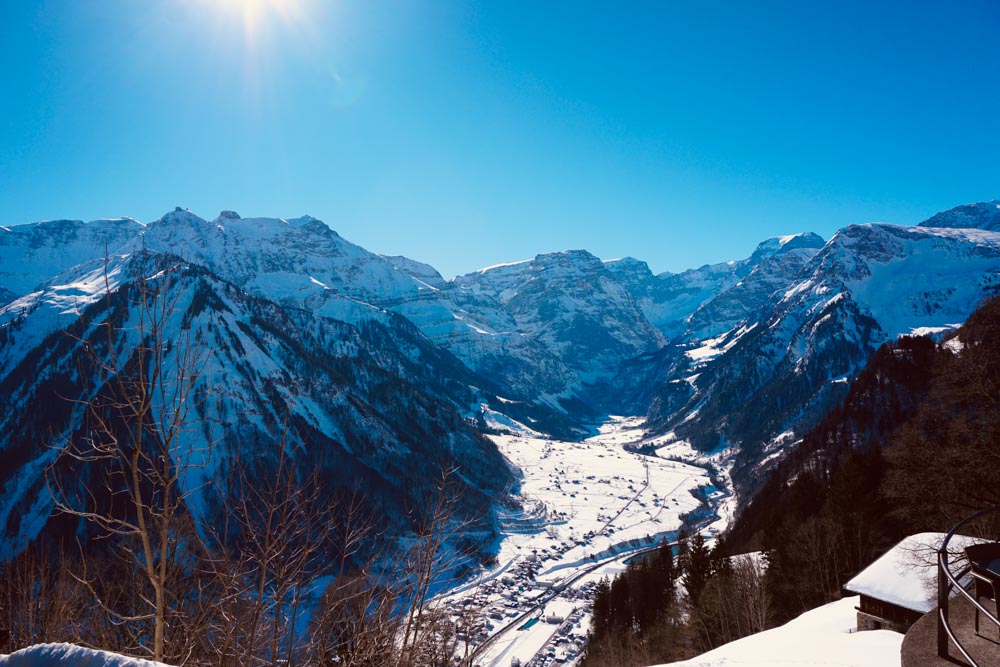 For a lot of people winter is a time they don’t associate with hiking. For us however, winter is a very fun time for hiking and outdoor activities and this scenic hike is testament to that.

Not far from Zurich, this hike took us to the ski resort of Braunwald in canton Glarus. The path started at one of the lower cable car stations, Grotzenbüel, and took us 300 meters up to Seblengrat! The path, as is often the case with winter paths, was really well marked and wooden poles covered in pink/purplish paint dotted the sides of the path. Whilst a large section of the path was wide, there were sections that were much narrower than the winter paths that you normally get in ski resorts, with soft snow covering the path as well. This was especially the case for the part that wound its way up up the hillside away from the ski slopes. It’s not too difficult but it’s just something to be aware of in case you were expecting a flat undulating path like with many winter walks in Swiss ski areas.

It was a busy Saturday and along with other hikers it seemed to be a really popular spot for skiers and snowboarders alike. And there were loads of paragliders too! Whatever the reason, it seemed to be a good day to get your paraglider out and so the sky was dotted with a colourful mosaic of them. I can’t imagine how cold it must have been up there though!

Once we’d got to the highest point of our hike, around 1880 meters, we stopped to soak in the views. It was at about this point that we heard some very large noises – it was like the mountain was grumbling. As we looked around to survey what was happening our jaws dropped as we witnessed slabs of snow, essentially an avalanche, come down some very steep sides of the valley opposite us. Now this was a mountain on the opposite side of the valley far away from the safety of our ski resort so there were no problems for us, but it was close enough that the danger of avalanches even on such a beautiful day felt very real. So it goes without saying, stick to the ski resort and those marked winter hiking paths – they’ve been placed there for good reason.

But enough of that health and safety warning and back to what was a really scenic hike. Once we’d made it to the top of Seblengrat, we were surrounded by skiers in all directions! There’s a restaurant up there too if you fancy some food and drink.

At certain times of the year, the winter walking path continues on from Seblengrat taking you another 50 meters up to about 1900 meters before looping back down. When we were there this section path was closed though due to avalanche risks. Having so recently witnessed one we were definitely not going to ignore that warning!

So off we headed down on a skilift from Seblengrat back down to Grotenzenbüel. At this point we thought we were done and were on our way home. But as we got off at Grotzenbüel we noticed a whole load of people with sledges headed for what looked like a sledging piste. It looked like they were having the time of their lives!

We’d never tried sledging before but this looked like so much fun we decided to investigate the possibility of giving it a shot. Renting the sledges was not difficult and at 15 CHF a pop it seemed like a fair Swiss price. The sledges were large, heavy and made out of metal which made them quite a beast on the piste!

So off we went trying to copy our fellow sledgers, with the sledging piste going 260m down over 2 km from Grotzenbüel to Hüttenberg. The no-need-for-speed spirited one of us took our sweet time in getting down, first trying to learn how to stop which admittedly is very difficult on one of these things. So is steering and thankfully they had catch nets along the steepest bits – just like they do for skiing.

We had bucket loads of fun though, even on the short steep bits, ending up taking the cable car back up from Hüttenberg just so we could repeat the sledging run again before handing in the sledges at the bottom and heading the rest of the way back down to the valley on normal motorised transport! We were more than satisfied with our eventful hiking day out in the Swiss mountains!

The route we described above in our post is the most energy intensive section of route 471 but you could complete the full loop starting and ending at Grotzenbüel itself. Note that when we were there though, the section from Seblengrat (where we finished) to Kleiner Gumen was closed due to avalanche risks so even if we wanted to complete the route we wouldn’t have been able to do so!

See here for more info on the full loop.

There are two separate winter hiking routes at Braunwald. This second one, Route 472 from Braunwald to Nussbühl and back, starts at the top of the Braunwald funicular. It’s apparently a family friendly path with minimal changes in altitude and is an easier yet still scenic alternative to the path we took.

Braunwald is one of the closer ski resorts to Zurich and is accessible within 1h 30min from Zurich main station. We took the train to the station of Linthal Braunwaldbahn where a connecting funicular or mountain train carried us up to the Braunwald ski resort in canton Glarus. From here it was a short stroll to the cable car station, Niederschlacht, where we hopped on to a series of two gondolas that dropped us off up at Grotzenbüel (Hüttenberg) station where we began our hike.

The travel time by car is 1h 10 min with no traffic but it’s a popular spot so travel times on the way back to Zurich may be longer! There’s lots of car parking at Linthal Braunwaldbahn train station costing roughly 5 Chf a day. Parking address: Stachelbergstrasse 2, 8783 Linthal.

A Snowshoe Hike in Canton Glarus