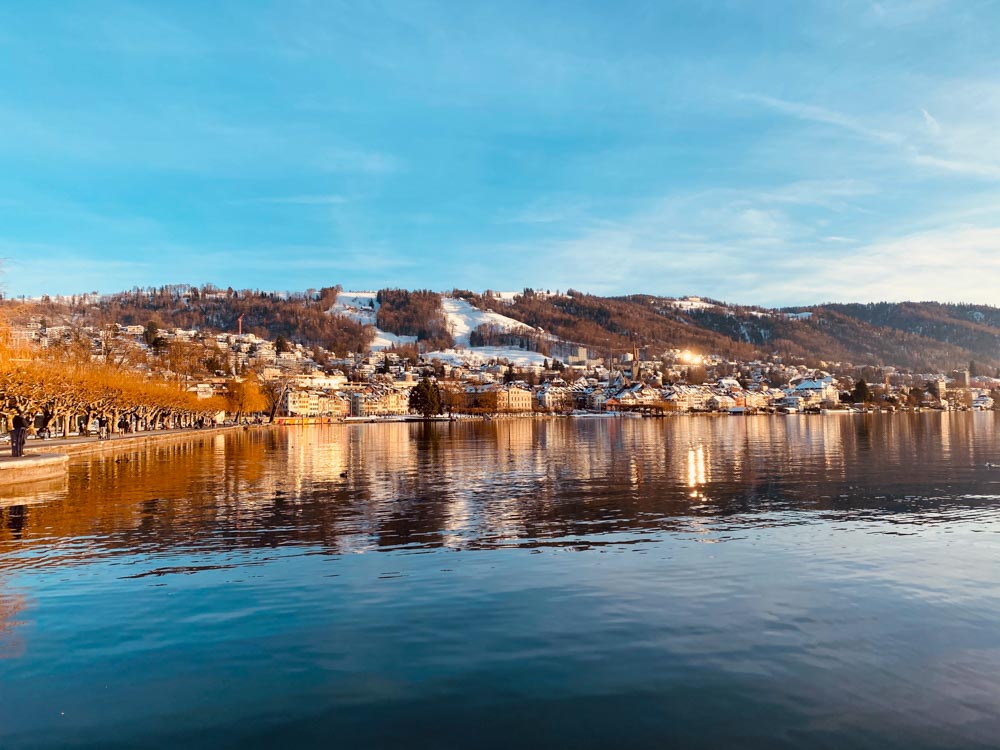 The Zugerberg is to Zug what the Uetliberg is to Zurich, i.e. its local playground! It’s a popular and easy hike that offers lovely views on the way up and makes for a good day trip in the wider Zurich and Lucerne/Luzern area.

The path starts right at Zug train station and very quickly takes you along the scenic shores of the Zugersee lakefront. On most days you’ll get to see the regions famous peaks, Rigi and Pilatus, and on a really good day you’ll be able to see as far as the Eiger, Munch & Jungfrau trifecta right in the middle. It’s a breathtaking view and if you’re not in a hurry consider grabbing breakfast at one of the many cafes along the lake.

Tip: If it’s open, Bob’s Food Store is a tiny little local shop that does a great takeaway latte (and no I’m not being sponsored to say this!)

As you continue along the lakefront, the path turns inwards taking you through the cobbled streets of Zug’s old town. It’s a picturesque town surrounded by several churches and an old city wall with multiple turrets.  If you’re into street photography you might even find yourself spending some time snapping away.

As you leave the town’s old walls, the path begins to wind up through suburbia. You’ll find yourself walking past a gothic church, schools and quite a pretty cemetery. Soon you’ll be up and on the open fields where the path begins to climb. The signposting on this hike is good and frequent so just follow the directions for Zugerberg.

At about the halfway mark, Blasenberg, you’ll find a restaurant with a lovely view, outdoor seating and pet bunnies for some added entertainment. From here on, it’s just a steady 300 meters up fields and meadows to the top. Also, these fields seem to have a rotating set of goats and sheep which can be entertaining to get past!

At this point I should clarify what the “top” is. In some ways Zugerberg is a bit of an oddball as some of the best views you get are from the lake at the bottom and as you walk up. The top is pretty flat and there’s no real “peak”. Zugerberg is actually the name of the funicular station at the top and the hiking signs say “Montana 933m” once you reach the top in reference to the Institute Montana, a boarding school on top of the Zugerberg. There are various spots from which you could enjoy the view but it isn’t your typical Swiss peak with a giant cross on it. If you’re at the top and wanted to continue hiking for a bit you could loop up to Hochwacht and back which is about a 100m further up.

We’ve been up the Zugerberg on various paths in different seasons and each time it’s had a very different feel! In summer it’s been a shorts and t-shirts hike with beautiful views all round! In autumn, we’ve either had gorgeous views at the bottom but cloud on top or we’ve been above the cloud line which means grey at the bottom and sunny on top! Then comes winter and one year when it had snowed a tonne we found it was bustling with activity. There was about a meter of snow on the ground and people were cross country skiing, snowshoe hiking and winter walking. Some years when there’s a lot of snow there’s even a sledge run down the hill! And when it’s rainy or has recently rained we’ve found that the paths can be VERY muddy. So, in such cases consider wearing proper hiking boots because your trainers won’t look the same by the end of the hike,

And finally, if you’re back down and want to grab a drink then Fischerstube (hidden in the old town) or Quai Pasa ( a lakefront summer pop up bar) are great options.

So there you have it, the Zugerberg! A great hike in all seasons and for all abilities. We hope you enjoy it too!

Some Notes on the Zugerbergbahn

The walk starts from Zug Bahnhof from where Zugerberg is clearly posted all the way up. To get back to Zug station from the top, the Zugerbergbahn funicular runs twice an hour every day from about 7am to 11pm to Schönegg, which is in the suburbs of Zug (though as of the time of writing, there’s a replacement bus running as they’re refurbishing the funicular until 11 Dec 2022). After 6pm, you need to press a button to request that they run the funicular. Once at Schönegg, bus 11 is usually waiting outside. Hop on it. It takes about 10 minutes from the bottom of the funicular to a bus stop called Zug, Metalli/Bahnhof, which is 2 minutes away from Zug station.

Zugerberg is not really a peak, but more of a flat alp up a local mountain and as a result is dotted with many paths coming and going in all sorts of directions. As a result, it’s easy to customise the length and size of hike you’d like to do. The hike we described above is one of the nicest routes up and Option 1 below gives you the views from on top without actually having to do the entire hike. If you’d like to customise your own route just use the Swiss hiking map on wanderland.ch – we have more details on that here.

If you’d prefer something light then instead of hiking up, take bus 11 from Zug, Metalli/Bahnhof to Schönegg. From Schönegg, take the funicular up to Zugerberg. From here you can do a short loop in which you summit Hochwacht and Hochstock.